Italy is no longer striking a "bella figura." The country's post-election chaos has shaken the very foundations of the European Union, as the idea of a politically united Europe appears to have suffered a blow. 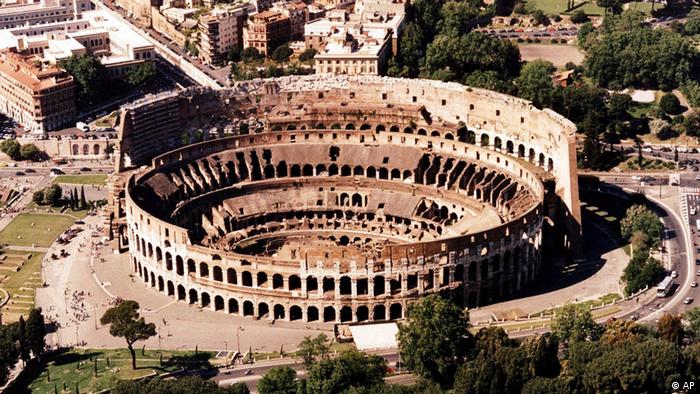 Rome's Colosseum appears somewhat run-down, with its enormous pillars stained gray by pollution and its basement vaults fallen down. Yet it continues to be a first-class European cultural good. Now, with the Italian capital's coffers empty, a luxury fashion company is financing the site's renovation, to the tune of 25 million euros ($33 million).

These days, the monument to Rome's former greatness appears to be a reflection of Italy. Because of its financial problems and current political stand-off, Italy - among the "most European" of countries - has become the problem child of the continent. Like the Colosseum, the highly indebted eurozone country could be dependent on external help - namely that of the European Union.

The EU is hoping that the Mediterranean country will be able to get itself out of its crisis, as the EU isn't eager to take on the role of sponsor. But if the third-largest economy of the eurozone keeps tumbling, it could take the whole bloc with it.

Developments in Italy, though a consolation to EU skeptics in Greece, Spain and Portugal, have placed basic assumptions into question: for example, whether Europe can be reformed, how fundamentally sustainable solidarity is, and whether the political union even makes sense. 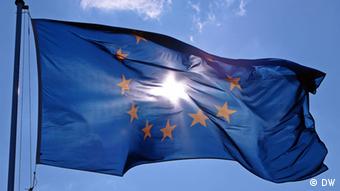 Daniel Gros, director of the Brussels-based think tank the Centre for European Policy Studies, said he fears that "the idea of a political union has been put back by this election." Gros told DW that it continues to show how the common European project is overshadowed by the domestic political situation and "who can attain advantages at the cost of whom."

For this reason, Gros said efforts to push forward a political union should be undertaken very carefully. "What we've seen in Italy is what hasn't worked," Gros added.

In such a situation, comments from German opposition candidate for the chancellorship, Peer Steinbrück, added fuel to the fire. Steinbrück called both former Italian Premier Silvio Berlusconi as well as Beppe Grillo, head of the third-largest party emerging from the recent vote, two different kinds of clowns. With this, he insulted about half of all Italian voters, coming off as an arrogant German. 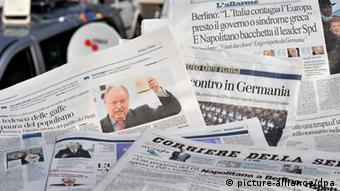 Jürgen Matthes, of the Cologne Institute for Economic Research, said he hopes that the situation in Italy doesn't come to an impasse. He said the alarm should be sounded over any government that would reverse the reform course set into motion by former Italian Prime Minister Mario Monti.

If this were to occur, financial markets would probably jack up interest rates for Italian bonds, and likely no longer be calmed by the European Central Bank. The bank's announcement that it could buy unlimited state bonds - thus limiting the interest rate increases that are of such great concern to the market - "would only work if Italy were on a reform course," Matthes said.

Ratings agencies are already concerned, and could act on this sentiment: Moody's is considering a further downgrade to Italy's credit rating. Although this is putting pressure on the country, Matthes said he was pessimistic, because in Italy - as in many other nations - an alliance of anti-reform powers is not inclined to give up its currently advantageous situation.

"Until now, the crisis hasn't been felt strongly enough in Italy to convince the population that something fundamental needs to change," Matthes said, adding that as long as this is the case there is little Brussels can do.

How deeply Italy's problematic election results have shaken the EU leadership in Brussels could be seen in their reactions to the vote: Most within the EU hierarchies have retreated to their offices, sending spokespeople out in their stead.

EU Parliament President Martin Schulz was among the few officials who made a public statement. Pale and visibly shaken, Schulz said the EU was unfairly criticized in the Italian election and blamed for problems it could not influence.

"We in Brussels should take it very seriously when success are always attributed to national governments while Brussels is the one making all the mistakes," he said. "This is not the truth but it does represent the public's perception."

Gros shared Schultz's assessment, adding, "In Italy, people were being told that the austerity policy was forced upon the country from Brussels or even Berlin," but in reality, that policy became necessary "because the markets didn't finance Italy anymore and less so because Brussels insisted on it."

Now political discussions about the role of the EU are in full swing. Observers see the defeat of the reformer Monti and the surprisingly good results from EU critics Berlusconi and Grillo as a clear signal directed at Brussels that the austerity drive is coming to an end.

Growth rather than cuts 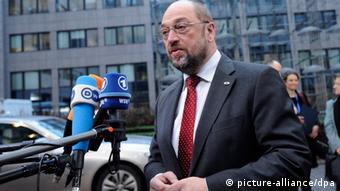 Schulz tried to calm the waters after the storm

The EU Parliament is listening to the demands for a change from reforms. Schulz told German public radio he sees the Italy election result as a call for the EU to abandon a one-sided austerity policy. Instead, he said, there should be sustainable budget discipline and investment to create new jobs.

That's exactly what experts have been pushing for, according to Matthes of the Cologne Institute for Economic Research.

"There's been a discussion as to what extent we need consolidation, and there are different opinions on that," he said.

It is, therefore, the case that not just Italy is in need of reforms, but also EU policy. The work on the Colosseum, meanwhile, is well under way. Fences and scaffolding have been set up and the work has begun.

Italy's future depended on using "the beauty of its monuments," at least according to millionaire Diego Della Valle, who is among those sponsoring the building's facelift.

He's the "enfant terrible" of Italian politics, whose one-liners made headlines throughout the election campaign. Beppe Grillo could end up as the kingmaker of Italian politics - it's a role he says doesn't interest him. (28.02.2013)