Ten years after the Al-Qaeda-organized terrorist attacks in Madrid, EU counter-terrorism coordinator Gilles De Kerchove tells Deutsche Welle that the terrorist threat for Europe is still there - but has changed. 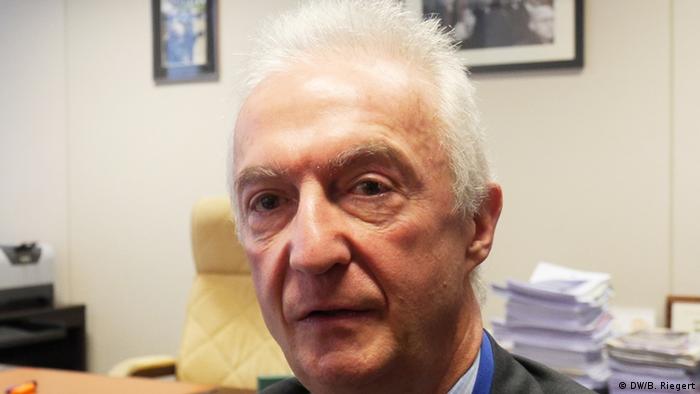 Deutsche Welle: Ten years ago, on March 11, 2004, terrorist attacks on trains in Madrid killed 191 people and left 2,000 people injured. How would you evaluate the threat that exists today?

Gilles De Kerchove: I would say that the threat has changed a lot not only since the Madrid bombings but since 9/11. At the time we were confronted with an organization - Al Qaeda, which was very well-structured, like a multi-national company. It has morphed into something completely different. We now have franchises of al Qaeda everywhere in the world. We have seen some 'lone wolves' - people acting by themselves with no link to the al Qaeda core. And we have recently seen a rise of Europeans going to Syria - going there to fight. And that raises a specific security challenge.

Are al-Qaeda-related or inspired groups the main threat or has the threat also shifted to other groups?

The threat raised by al-Qaeda-directed or al-Qaeda-inspired groups remains the most important terrorist problem for Europe. Of course we've had cases in Germany where migrants were killed by right-wing extremists, we've had [Norwegian terrorist Anders Behring] Breivik. We probably have to work a bit more on that. But the threat related to al Qaeda remains the main threat.

How is Europe connected to conflicts taking place in countries like Afghanistan or Syria?

What we see - and that's one factor that amplifies the threat - is that we have more failing or failed states. And we know that these types of groups want to avail themselves of failing states to regroup, to train, to reinforce themselves. And therefore, for the time being, one of the challenges with the so-called Arab Spring countries is that many of these countries had to dismantle their security services - because they were the arm of repression. And they are weaker than they were before because these are democracies under construction.

And this raises an additional challenge because as I said these groups are very mobile. Afghanistan - and you could also mention Iraq - is in deep trouble. Also the countries around Syria, and Egypt with the Sinai, where we see many different groups regrouping. Libya is very weak at the moment. In the southern part of Syria we have a hotspot as well. All these [countries] constitute an important challenge for the European Union. And that should lead us to do more to help them to rebuild their security apparatus.

You mentioned so-called homegrown terrorists - people who have grown up in Europe and go to these 'hotspots,' to return radicalized. How great is the threat from people like that?

The conflict in Syria plays an important role. It is a real magnet. We probably have more than 2,000 Europeans who have been or are getting back from Syria. It's a possible threat because there they get training, they know how to use a Kalashnikov and build a bomb. They will have a network of friends from all over the world. We know from studies that in recent years 60 percent of the attacks have involved someone who was trained abroad, who had fought abroad. And therefore we have to define a smart policy to handle the returnees in the best way possible.

Do you think Europe's coordination of the fight against terror has improved?

We have made a lot of progress. I think we have managed to define an EU policy that is pretty balanced - where we try to not only mobilize the police and criminal justice but we try to invest in prevention. We are more engaged in third countries, we now have specific financing programs to help third states to beef up their capability as well. But the Treaty [of Lisbon] says [member states] are solely responsible for their national security. The European Union is there to help the member states, to make them more effective but we're not there to replace the member states.

Through an intense cooperation between the different security and intelligence services and the police and so on, all member states have been able to prevent concrete attacks. It's not always publicized, sometimes you need to stay discrete. But indeed we have not had a major terrorist attack since the Madrid and the London bombings.

Cooperation with the US is also seen as key to successful counter-terrorism. In light of the recent scandal over the NSA's data collection, how important is collecting all this data in the fight against terrorism?

We need close cooperation with the US. It is a huge provider of intelligence, and it shares a lot of it with all member states and helps us a lot. I've always been in favor of reinforcing transatlantic cooperation even further. We should keep investing in that relationship. On the other hand, the leaks from [Edward] Snowden have raised a lot of concern in terms of privacy. And that's one of the stumbling blocks in our relationship. We would like [the US] to recognize and better protect the privacy of EU citizens.

Do you think an overarching Euopean secret service would be a good idea?

The Treaty of Lisbon is very clear […] that national security remains the sole competence of the member states. The 28 member states are not ready to let the European Union develop an intelligence capacity for the time being. One day you may think that could be developed but that's for after my retirement I'm afraid.

Ten years on, would you say that attacks like the ones in Madrid could never happen again?

No. There is nothing like 100-percent security. But it's much less likely. We share more data, we are much smarter than we were before. But especially in regard to the more than 2,000 Europeans who have been to Syria […], it's very difficult to say that we won't have any attacks. That's why we need to remain extremely vigilant and well-prepared.

Gilles de Kerchove (57) is the second counter-terrorism coordinator the EU has seen. After years working as a legal expert in the European Council, he also teaches European law at several Belgian universities. The position of counter-terrorism co-ordinator was created in March 2004 following the terrorist attacks in Madrid. The first person to take on the job was Gijs de Vries, who resigned in 2007 complaining that member states were not willing to cooperate, undermining his position authority.

In 2004, bombs planted on trains in Madrid killed 191 people and injured nearly 2,000. A decade on, Spain is better prepared for jihadist terrorism - but the country remains divided by the attack’s fallout. (10.03.2014)

'Not shocked if Germany spied on us'

Americans would not be shocked if they found out that German intelligence services monitored them, former CIA Director John McLaughlin tells DW. He also explains why he feels mass surveillance is justified. (19.02.2014)