Spain marks 10th anniversary of bombings | Europe | News and current affairs from around the continent | DW | 10.03.2014

In 2004, bombs planted on trains in Madrid killed 191 people and injured nearly 2,000. A decade on, Spain is better prepared for jihadist terrorism - but the country remains divided by the attack’s fallout. 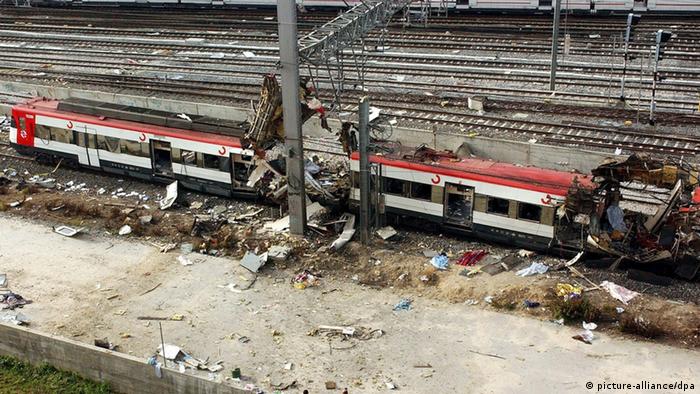 Whenever she gets on a train, Araceli Cambronero cannot help but be reminded of the most brutal terrorist attack Spain has ever seen, one which nearly took her life.

On March 11, 2004, she was on a train that was pulling into Atocha station in Madrid when bombs on board exploded, destroying several carriages and killing dozens of people. It was part of a coordinated Islamist attack on four trains in the Spanish capital which would take the lives of 191 people and injure nearly 2,000.

Physically, Cambronero was virtually unhurt, but the trauma of the experience nearly caused her life to unravel.

"I started feeling hyperactive, I couldn't sleep," she recalls. "I had panic attacks, I didn't eat and I lost 20 kilos (44 pounds) in weight. This affected my marriage and I got divorced. Then I lost my job, and six months after that I was diagnosed with breast cancer."

As she joins others in commemorating this year's 10th anniversary of the bombing, Cambronero is still out of work and has difficulty paying the rent each month for the apartment she shares with her two children. But she has overcome the cancer and believes she has put the worst of the trauma behind her.

"I no longer relive what happened that day - I've learned to live with it. But every time I get on a train, I remember," she says. "March 11 started on that day, but for me, March 11 never ended."

For many of those who survived the bombing or lost loved ones, that day still dominates their lives. Like Cambronero, their careers, families, or health have suffered.

Beyond the stories of personal loss and trauma, Spanish society as a whole was also deeply affected by the second-worst terrorist attack Europe has seen, after the 1988 Lockerbie bombing over Scotland. 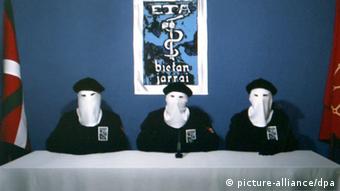 ETA declared a ceasefire in San Sebastian, Spain in 2011 but has not yet given up its weapons

It took place just three days before the general election that would remove the conservative Popular Party (PP) of Jose Maria Aznar from power. Immediately after the attack, Aznar had insisted it was the work of Basque group ETA, despite evidence that jihadists had been responsible.

The notion that the government had not told the truth and that its support for the invasion of Iraq had provoked the bombing appeared to help Socialist Jose Luis Rodriguez Zapatero win a surprise victory.

Zapatero, who governed until 2011, was accused by many on the right as having directly benefitted from terrorism. Meanwhile, conspiracy theories started to circulate: that ETA had in fact been involved or even that the Spanish security forces had organized the attack.

A 2007 sentence jailed a group of Al Qaeda-inspired terrorists for carrying out the bombing. But while the conspiracy theories have long been discredited, their advocates continue to insist that that the Spanish state - and particularly the Socialist Party - orchestrated an elaborate cover-up.

"[A jihadist attack] was a real shock because Spaniards were strongly focused on the threat coming from ETA," says Fernando Reinares, a senior analyst on international terrorism at the Elcano Royal Institute. Reinares has just published a book that painstakingly analyzes the 2004 Madrid attacks, as well as their causes and effects. He believes the bombing was a response to Spain's arrest of jihadists several years earlier - and not, as many believe, an act of revenge for the country's involvement in the 2003 invasion of Iraq. 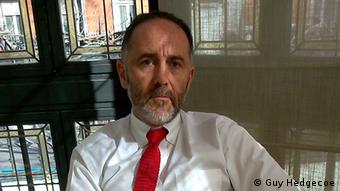 With the national newspaper El Mundo throwing its weight behind the ETA conspiracy theory for many years, as well as some senior figures in the PP, the 2004 attack and the controversial election that followed have deeply divided Spain.

Pilar Manjon, the president of the March 11 Victims' Association who lost her 20-year-old son in the bombing, has always accepted the official version of events and has frequently been insulted in the street by those who think otherwise. In the build-up to the attack's 10th anniversary, Manjon's association and another victims' organization more closely associated with the political right struggled to even agree on how to mark the day.

"First of all, you have to take into consideration that our political system is more polarized than, for instance, the British one," says Reinares, explaining the discord. "And also, Spain lacks basic consensus on key public policies concerning security, defense, foreign affairs, and counter-terrorism."

And yet, despite the schisms it opened up, the Madrid attacks did spur Spain and the EU to improve anti-terror policy.

"Following the attacks in Spain, the European Union as a whole adopted measures which were taken far more seriously by member states than those adopted after the 9/11 attacks," Reinares explains, pointing to legal and institutional changes as well as an increase in cooperation between authorities in different states.

US offers Russia support at Sochi after Volgograd attacks

Washington has said it would welcome "closer cooperation" with Russia over security at the forthcoming Sochi Winter Olympics. Two deadly terror attacks in the regional hub of Volgograd have drawn worldwide condemnation. (31.12.2013)

The Boston Marathon bombing has prompted more debate on surveillance cameras in public places in Germany. The interior minister says more would improve security; others have warned against "reflex demands." (21.04.2013)

With seven months to go before a referendum on independence, Scottish nationalists are finding that leaving the United Kingdom and creating a new state might not be plain sailing. (18.02.2014)