The Boston Marathon bombing has prompted more debate on surveillance cameras in public places in Germany. The interior minister says more would improve security; others have warned against "reflex demands." 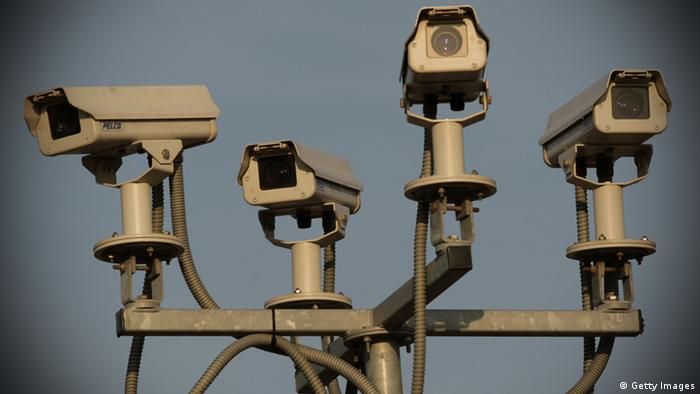 Interior Minister Hans-Peter Friedrich led the call for more widespread use of video cameras in public places, saying that the Boston Marathon bombing and the subsequent identification of two suspects showed the efficacy of such surveillance.

"The events in Boston again show how important video surveillance of public places is to investigate the most serious crimes," Friedrich said in an interview published in the mass-circulation Bild am Sonntag newspaper. "That's why we're working, for example, with Deutsche Bahn to strengthen surveillance at German train stations."

Another member of the Bavarian arm of Chancellor Angela Merkel's Christian Democrats, the southern state's interior minister Joachim Herrmann, supported his party colleague Friedrich. Herrmann said he would continue to work towards "a representative expansion" of camera usage in Bavaria.

Other Christian Democrats spoke in favor of such a move, along with Jörg Ziercke, the president of the Federal Criminal Police Office (BKA). However, other political parties and law enforcement bodies were more reticent in the Sunday papers.

Federal Justice Minister Sabine Leutheusser-Schnarrenberger, a member of the government's junior coalition partners, the Free Democrats, warned against a swift reaction in an interview with the Welt am Sonntag.

"The terrible attack in Boston should not be turned into an instrument for a domestic political debate," Leutheusser-Schnarrenberger told the paper. "Germany already has sufficient security laws."

Andreas Vosskuhle, president of the German Constitutional Court, said it was "part and parcel of politics" that "immediate demands are formulated after an event like the one in Boston."

"But when it comes to the concrete implementation, then a certain temperance should return," the country's top judge said.

'Only permissible in dangerous places'

Bernhard Witthaut of the major GdP trade union for police officers in Germany pointed to a February 2007 Constitutional Court ruling saying that video surveillance in public places "is only permissible in dangerous places." That ruling said that observing public places not considered flashpoints would amount to a widespread intrusion on privacy without cause for suspicion.

Leading Green politician Jürgen Trittin, the party's co-candidate for chancellor with his colleague Renate Künast, was perhaps the most vocal critic of Friedrich's suggestion, calling it "shabbiness from the right" at a regional party conference.

"You cannot compensate the policy of cutting our police force to breaking point by putting up video cameras everywhere," Trittin said. "That will have just one effect: You will then get clean video footage, from all corners, of the crime that your own policies of austerity cannot prevent."

A bomb placed at Bonn's main train station in December 2012 also brought the issue of surveillance cameras into the German public debate. A suspect was spotted only on grainy footage recorded by a security camera in a branch of McDonald's; he has not been found. Despite the presence of public cameras at the station, the kind of venue approved for surveillance by the Constitutional Court, no pertinent footage was recorded and stored. Police and Germany's Deutsche Bahn traded barbs as to who was responsible for the oversight.