David Hasselhoff on his AI-generated alter ego 'The HoffBot'

David Hasselhoff drove an artificially intelligent car in "Knight Rider." Now he's starring in a short film written by AI. Hasselhoff told DW about the blurry line between his self-referential alter egos and himself. 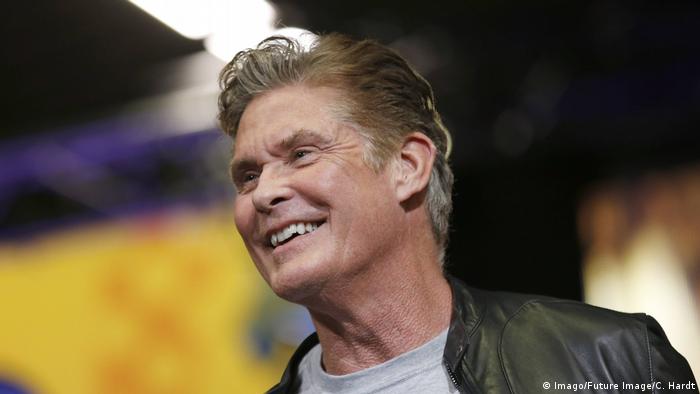 TV icon, pop singer and 1980s sex symbol David Hasselhoff takes his affinity for artificial intelligence to the next level, playing "The HoffBot” in a short online film with dialogue written by anAI named Benjamin.

For "It's No Game," the sequel to "Sunspring," the first film entirely written by AI, Benjamin's creators, filmmaker Oscar Sharp and technology artist Ross Goodwin trained the AI on Hasselhoff's actual lines from the 1980s series "Knight Rider," featuring an AI car called KITT, and "Baywatch" - giving birth to his character The HoffBot.

DW: In this short film you play a robot version of yourself, speaking AI-generated dialogue. But somehow the movie still ends up being about you.

What made you want to do this project?

Artificial intelligence, written by a computer: I said, how do you pass that up? This is unbelievably cool. I watched "Sunspring" [Eds.: The prequel to "It's No Game."] and I thought, this is very weird and lots of fun. You could see the actors struggling to make sense of the lines from the computer, which didn't make much sense.

The HoffBot's lines don't totally make sense either. But they're based on lines you actually said on TV. So did they feel familiar?

Oh yeah. I played that part up and blew [director Oscar Sharp's] mind because it was like Michael Knight [from "Knight Rider"] coming to life. His eight-year-old child self went a little ballistic on the set. That happens to me a lot. Even with "Guardians of the Galaxy Vol. 2," and the director and I falling madly in like. He was an eight-year-old boy who loved "Knight Rider."

As the HoffBot you wear a gold, paisley Dolce & Gabbana jacket, UGG boots and red "Baywatch" swim trunks. All yours?

The Dolce & Gabbana thing I wore in a commercial and brought it with me. I told the director, "I got red Baywatch trunks in the car." He said, "Why?" I said, "In case I gotta go to the beach." I have different color bathing suits. I just happened to have the red ones in the car.

The HoffBot seems to be the next step from your usual caricature of yourself, The Hoff.

The Hoff is a character that was never invented by me. That was invented by secretaries [in Australia]. Fourteen years ago, I got a call from the "Sydney Telegraph" asking how I felt about being a sex symbol at 50. [The reporter] said there's an epidemic of emails going back and forth about Hoffisms: "Some like it Hoff." "He's Hoff-alicious." "Hoff-tastic." "To Hoff-inity and beyond."

So I just went along with it and now The Hoff has been the darling of commercials for me and has made me a lot of money. But it was kind of eclipsing David Hasselhoff.

Do you ever get lost between David Hasselhoff, the person, and The Hoff?

Not for one cent, one dollar, one minute, one second.

Your British mockumentary series "Hoff the Record" won an International Emmy. Even people who know you thought it was reality TV rather than scripted comedy.

For the longest time, I wallowed around in believing some of the [negative] press that was written about me, including an incident that happened to me in my private home. [Eds.: A video emerged of a drunk Hasselhoff with his daughter admonishing him for drinking.] One of the ways I got over that was "Hoff the Record." I address everything. Instead of calling a newspaper saying, here's my side, I did it through entertainment. 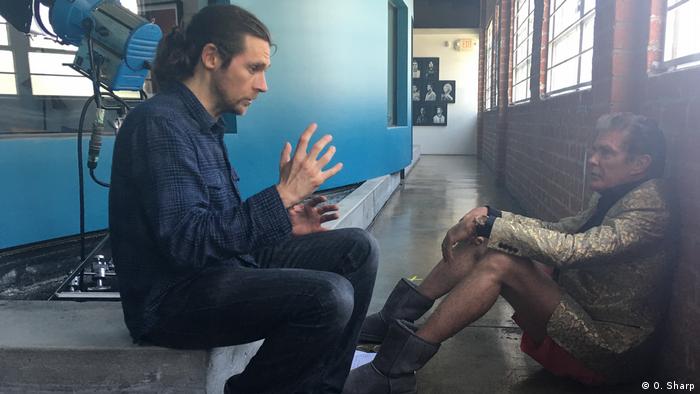 Director Oscar Sharp on the set with David Hasselhoff

I'm at a place right now where I don't have much fear of people not taking me seriously, so I just go for it. For the longest time when I was touring Germany, I saw people saying, "Thank you for the fall of the Berlin Wall." And I thought it was a joke. And they weren't [joking]. They were really thankful that I was there singing about freedom, and that I had toured East Germany before Reunification.

The 80s were full-on, man. It was pedal to the metal. It was also an amazing time when "Knight Rider" was born. We were living large and we had parties every night. [But] I don't miss going to work after one hour of sleep.

Speaking of "Knight Rider" and AI, are you waiting for Tesla founder Elon Musk to come out with a real KITT?

Pretty much everything about the KITT car has come true. All the cars talk. I got to drive the driverless car. A guy named Sergey [Brin] who co-founded Google put me in the car, and I drove this driverless car, which was pretty amazing.

You're particularly famous in Germany. So I crowdsourced some questions from my German friends. Here goes:

1. Are you still looking for freedom?

You know, as a matter of fact, I am. I'm looking for the freedom to be successful at what I really want to do. I think I've found freedom with my new fiancée [Hayley Roberts], which grounds me. As far is freedom is concerned, I don't know if I'll ever find freedom until I bring "Knight Rider" back, the way it should be. Then I will say I've completed it all. I'm damn close to bringing it back, so let's see what happens.

2. Do you feel misunderstood in any way?

Best criticism I ever got: Someone in Germany said to me, "Do you think Germans would like your music so much if they actually understood your lyrics?" And I said, no. I don't think I'm misunderstood at all. I throw my heart out on a daily basis, and what you see is what you get. You don't wanna Hassel me, because if you Hassel me, you're gonna get The Hoff. And if you respect me, you're gonna get respect.

I'll be in Berlin soon and you're gonna hear about it.

Volker Schlöndorff: 'There is a major volte-face taking place' in France

Renowned German filmmaker Volker Schlöndorff told DW why he's optimistic about the French election - and why he turned down Steven Spielberg to take on a political crisis. (05.05.2017)

Festival of Animated Film brings magic to the silver screen

From films drawn by hand to those made using digital techniques, the unique festival in Stuttgart has plenty to offer visitors. Screening over 1,000 films, the festival knows no limits when it comes to style and content. (03.05.2017)

The father of punk music can now be admired on the big screen. With his latest documentary, "Gimme Danger," cult filmmaker Jim Jarmusch pays homage to Iggy Pop and his legendary band The Stooges. (27.04.2017)