The menacing black helmet worn by David Prowse in 1980 is predicted to sell for $500,000 at an auction in September. It's part of a Hollywood treasure trove on sale over three days, including signed Harry Potter specs. 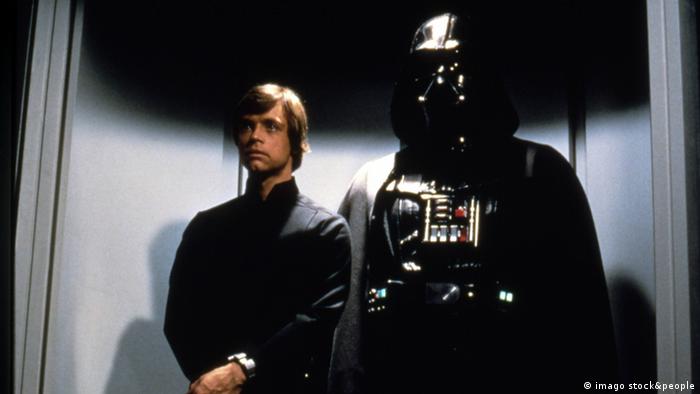 Darth Vader‘s helmet from "The Empire Strikes Back" is among a collection of Hollywood treasures in a million dollar auction.

The "Icons and Legends of Hollywood" auction will take place September 25-26 in Los Angeles, with about 1,000 items expected to sell for over $10 million (€4.5 million) in total.

"Star Wars is always popular. It's never been hotter than it is right now, with the franchise continuing as strongly as it is," said Zach Pogemiller of auctioneer Profiles in History.

Experts estimate that the Star Wars prop will sell for approximately $500,000, but because of its popularity, Pogemiller thinks the price of the science fiction artifact "could well exceed that."

The mask and helmet is one of only a handful worn during filming by David Prowse, the bodybuilder and actor who inhabited the suit of Luke Skywalker's nemesis and father in "Star Wars", while James Earl Jones voiced the role. The auction organizers view it as the "holy grail" of science fiction artifacts.

Wizard of Oz and Titanic treasures

Also expected to sell for $500,000 is a black-and-white dress worn by Barbara Koshay, Judy Garland's camera double, while playing Dorothy in the 1939 classic "The Wizard of Oz".

More contemporary artifacts up for auction includes a prototype moon buggy stolen by James Bond from villain Blofeld's secret lair in "Moonraker", expected to go for an estimated $600,000.

Also expected to trigger bidding hype is a dress worn by Kate Winslet in the iconic "Titanic," the DeLorean car smashed by a train in "Back to the Future III," glasses signed by Harry Potter actor Daniel Radcliffe, and an authentic best picture Oscar statuette from 1948.

One man's trash, another man's treasure

"You always hear stories of movie studio personnel who rescued what are now priceless pieces from the dumpster because they were being thrown out," said Pogemiller. "It's incredible that people really didn't have the foresight until relatively recently to preserve all of these important artifacts that are part of our cultural history."