German carmaker DaimlerChrysler reached a cost-cutting deal with workers Friday, securing 6,000 jobs at a plant near Stuttgart. The firm's top managers will contribute to the savings by giving up part of their salaries. 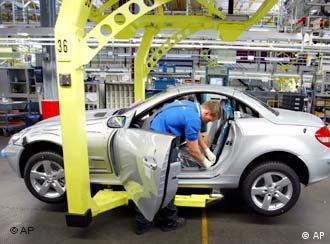 DaimlerChrysler had threatened to move jobs to South Africa

After two weeks of protests and strikes, DaimlerChrysler hammered out an agreement that will save the carmaker €500 million (US$612 million) in annual labor costs. In return, DaimlerChrysler said it will guarantee the jobs at the Sindelfingen plant near Stuttgart until 2012.

"The agreement sets the course for increased productivity and efficiency and so strengthens the long-term competitiveness of the Mercedes car group," Mercedes chief Jürgen Hubbert said.

German Chancellor Gerhard Schröder greeted the deal as "a victory for common sense" which would help strengthen Germany's economic recovery. Schröder also said the deal would set a precedent for savings negotiations at rival carmaker Volkswagen.

"I'm certain that after DaimlerChrysler, the negotiations at Volkswagen over cost cuts and job security will lead to a successful agreement," Schröder said.

The labor conflict was sparked last week after DaimlerChrysler threatened to shift production of its new Mercedes C-Class sedan away from Sindelfingen to Bremen and South Africa if workers did not agree to trim costs. 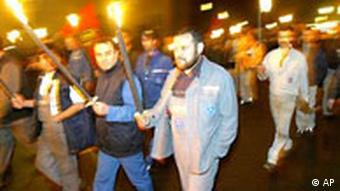 Some of the 600 night-shift workers of a Mercedes factory demonstrate against plans of DaimlerChrysler AG to extend working hours and lower labour costs.

Production at DaimlerChrysler's two factories in the southwestern state of Baden-Württemberg was halted on Saturday, as almost 15,000 workers downed their tools to protest the company's attempts to get employees to work longer without additional compensation.

DaimlerChrysler chief executive Jürgen Schrempp told reporters on Friday that the company's management will contribute to the cost-cutting efforts by foregoing around 10 percent of their salaries.

"We have a good solution for DaimlerChrysler, which is also good for Germany as a location to do business," Schrempp said.

Looking to save costs

The deal by DaimlerChrysler comes as several big German firms look for ways to lower their labor costs. Foremost among the measures is the attempt to move workers back to a 40-hour workweek.

Last month, Siemens said it would not to move thousands of jobs to Hungary after unions agreed to abandon its 35-hour workweek. That deal has led several other German companies, heavy truck maker MAN, to debate similar changes.

Using the threat of moving jobs abroad as a bargaining chip to get labor concessions is becoming popular among German firms. (July 21, 2004)