An unknown "illegal defeat device" was found in one of the carmaker's Mercedes models, a German newspaper reports. The country's auto sector is struggling to restore its reputation following the Dieselgate scandal. 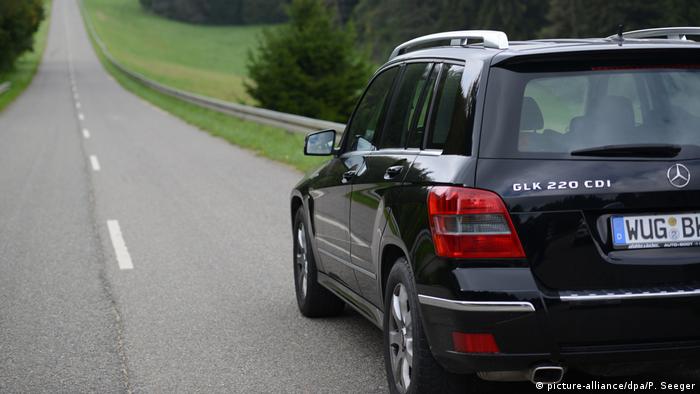 German automaker Daimler on Sunday faced fresh allegations of emissions cheating after revelations about a previously unknown manipulation software were made public.

The country's vehicle regulator has begun a formal investigation after discovering a new device in the company's Mercedes-Benz model GLK 220 CDI, the Bild am Sonntag newspaper reported.

According to Bild, the investigation is focusing on another "illegal defeat device" installed in around 60,000 vehicles produced between 2012 and 2015 with the exhaust emission standard 5.

Bild reported that regulators discovered the controversial software in late 2018. It said further emissions tests with a GLK model then confirmed their suspicion.

The paper said the European Union's emissions limit of 180 milligrams of nitrogen oxide per kilometer was clearly exceeded once the software was deactivated during the tests.

Software has been updated

Bild said the newly-discovered cheating software had been subsequently removed secretly during software updates by Daimler.

The Stuttgart-based carmaker confirmed a probe was underway by the Federal Motor Transport Authority (KBA). A spokesman told the German news agency Deutsche Presse-Agentur that the company had been in talks with the KBA for months.

"We fully cooperate with the Federal Motor Transport Authority and are reviewing the facts," Daimler said in a statement.

"In the course of the hearing proceedings, we will present our view to KBA."
Read more: Climate change: EU to seek stricter car emissions cut by 2030

German automakers are struggling to move on from the Dieselgate scandal, which first erupted in September 2015, when Volkswagen admitted to secretly installing software in 500,000 US vehicles to cheat government exhaust emissions tests.

The scandal is believed to have affected about 11 million cars worldwide, cost the company some $25 billion (€22 billion) in fines and compensation, and caused significant damage to VW's reputation.

Other German auto brands — Audi, BMW, Daimler, Mercedes-Benz and Porsche — were also implicated and subsequently carried out their own recalls.

Last year, Daimler was ordered to recall nearly 800,000 vehicles across Europe, including 280,000 in Germany, that were found to be fitted with emissions cheating software.

The company is carrying out the recalls of the diesel versions of the Mercedes C-Class, Vito and GLC models to install a new version of its engine management software.

Daimler is also potentially facing a big fine over the diesel scam; German prosecutors said in February they had opened a "fine procedure" against the firm.

The Daimler chairman with the walrus mustache is one of the few German CEOs that is instantly recognizable. Set to retire after 13 years, he leaves behind a company struggling to be relevant in a digital world. (06.02.2019)

VW growing out of cheating crisis with third-quarter profit boost

Volkswagen has seen net profits for the third quarter of 2018 more than double from the same period last year. The figures suggest that VW is pulling itself out of crisis following its emissions-cheating scandal. (30.10.2018)

German carmaker Daimler has reported a significant drop in bottom-line profit for the third quarter. It attributed the result to a number of one-off effects, including the introduction of a new emissions test cycle. (25.10.2018)

Daimler will now float its heavy goods vehicle business as a separate unit on the stock market. Shareholders will get 65% of the shares in the spinoff.