With its sausage-like body and notorious stubbornness, the revered dachshund had lately fallen from favor among pooch lovers. But the opening of the world's first wiener dog museum means the hound is back in vogue.

What do Napoleon Bonaparte, Abraham Lincoln, Kaiser Wilhelm II, Pablo Picasso, Andy Warhol and Adele have in common? What else but their love for dachshunds, better known in the English-speaking world as "wiener" or "sausage" dogs.

For decades, the robust little guy rated high on the popularity scale of dog owners. But the Labrador, Chihuahua and pug have long since eclipsed the dachshund, knocking it down to 29 on the most popular dogs list, according to German animal registry association, Tasso.

Like the German shepherd, the dachshund is today considered to be the epitome of Germanness, even more so than the cliched Bavarian lifestyle — explaining why a connotation of middle-class kitsch often clings to the pooch.

Read more: Long live the pug: Cuddly canine gets its own exhibition 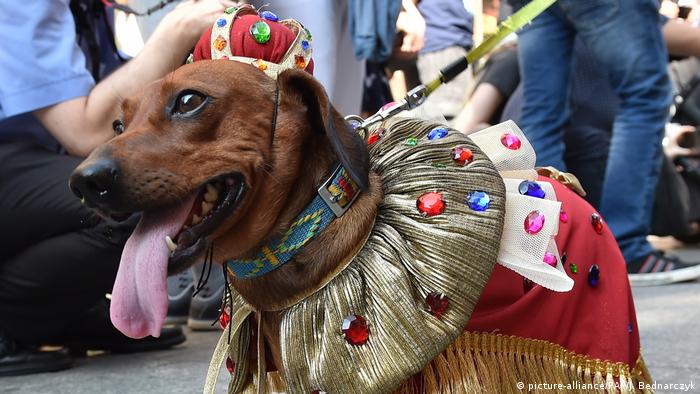 Some owners love to dress up their dachshund

'When the dachshund looks in the mirror, he sees a lion'

In dog circles, it's well-known that the dachshund belongs to those most idiosyncratic of four-legged friends; usually, the human at the other end of the leash isn't the one calling the shots. This pugnacious pooch has a healthy self-esteem and sometimes suffers from delusions of grandeur when fearlessly facing up to larger peers. It's not for nothing that the German saying goes: "When the dachshund looks in the mirror, he sees a lion."

The dachshund likely inherited this bravery from its forefather, the Celtic hound, said to have been hunting over 2,000 years ago. During the Middle Ages, dogs with short bowed legs were bred for their strong hunting instinct, and their ability to dig, because foxes and badgers were constantly eating chickens and crops but couldn't be caught in their underground homes. As early as 1560, dachshunds were mentioned in a publication on dogs, where it was said that they were "bred specifically for hunting in badger and fox holes."

In 1888, the Prussian officers and dog nuts Klaus Graf Hahn and Emil Illgner founded the German Dachshund Club, which still exists to this day and counts more than 20,000 members. Even Kaiser Wilhelm II, Germany's last emperor, was an avowed dachshund fan — his canine hunting companion, Erdmann, even got his own gravestone after his death in 1901.

About a century earlier, Napoleon declared he would share the grave with his best friend — his dog was laid out in the foot area of his grave. The hunting dog become a fashionable breed among the English aristocracy when Queen Victoria was seen accompanied by the loyal pooch.

All shapes and sizes

In the 20th century, the dachshund began its triumphant march around the world. Bred with short, long and rough hair, the increasingly chic breed was idealized by everyone from Picasso, who loved his Lump and immortalized him in a famous black-and-white drawing; to artists Andy Warhol and David Hockney, who also featured their dogs Archie, Stanley and Boogie in their works. Singer Adele built her house directly across from a park, out of sheer love for her dachshund Louie.

In Berlin, dog fans can visit the hip bar Posh Teckel, named in honor of the owner's dog, Ella. The bar even serves dachshund-shaped fritters. Trend watchers are saying that the dachshund's cachet is again on the rise — indeed, the low-flying hound could soon be challenging the pug as the new hipster dog.

Nowhere, however, are there more dachshunds than in Japan, with around 20,000 puppies born annually. Not even a half as many wiener dogs were born in their German homeland in 2017. Besotted Japanese owners often dress their dogs in velvet and silk.

Monument to the dachshund

But while the dachshund is still a minority on German streets, the new Dachshund Museum in Passau, founded by former florist and souvenir shop owners Josef Küblbeck and Oliver Storz, aims to change that.

For 20 years, the two men have purchased all manner of dachshund curios before a collector from Belgium left them his sausage dog treasure trove. Among the 2,000 exhibits in the permanent exhibition: dachshunds made of porcelain, in the form of bottle openers, Christmas tree decorations, and, of course, a print of Picasso's famous dachshund drawing.

"Dachshunds are relaxed, sociable, quick, intelligent, persistent, affectionate, loyal, loving and devoted," said Küblbeck. He and his partner have read everything about dachshunds, including many anecdotes. One example: when the breed was going out of style at the turn of the millennium, English singer Liam Gallagher bought 10 dachshunds to ensure they wouldn't die out.

But the Oasis frontman need not have worried. Despite some opponents of the museum claiming it isn't a real cultural institution, Passau itself has gone pooch crazy with a local Italian restaurant creating a dachshund pizza, and bakers serving up sausage dog-shaped pretzels and chocolates.

Indeed, it seems the new star attraction could soon be back in the German top 10.

A dash through the Passau Dachshund Museum

Easter usually brings the Easter Bunny, but this year it has brought the wiener dog — to the Bavarian city of Passau, at least. That's where the the world's first Dachshund Museum has opened its doors. (01.04.2018)

There are eco-friendly alternatives to getting from A to B, like e-vehicles. Which would you like to take for a spin?

The French-American actor is the first man to appear solo on the cover of the British edition of Vogue magazine in its 106-year history.

Wearing Lederhosen, driving at top speeds on the Autobahn or enjoying a huge variety of bread: We wanted to know what you most associate with German culture.