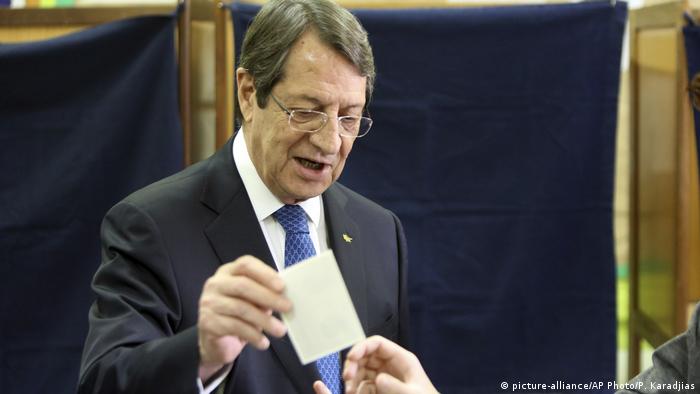 With almost all of the votes counted, Anastasiades held a 12-point lead over Malas.

State-run broadcaster RIK reported that Malas had telephoned his election rival Anastasiades to concede defeat about an hour after the polls closed.

Anastasiades' supporters in the capital, Nicosia, celebrated on the streets and honked car horns shortly after news broke that Anastasiades had won an unassailable lead over Malas. His inauguration is set to be held later on Sunday evening.

However, the official turnout stood at just 73 percent, with apathy particularly high among young voters.

Sunday's vote took place barely seven months after the latest failure to reunify the eastern Mediterranean island nation, which was divided into a Greek-speaking south and a Turkish-speaking north in 1974 when Turkey invaded following a coup by supporters of union with Greece.

But with both candidates perceived to be on the same page regarding reunification talks, it was the economy where the battle was really fought.

Presidential runoff at a glance

Anastasiades had warned voters that choosing his communist-backed challenger would jeopardize the island's economic recovery.

"Your decision will determine whether we will return to the dogmatic policies that led us to the brink of bankruptcy or whether we will continue to steadily pursue the country's development," Anastasiades said in a televised message on Friday.

"Your decision depends on whether we continue on the path of growth that creates opportunities for all or go back to the era of deficits and excessive public debt."

Read more: How Cyprus got on the road to financial disaster

Cyprus, a European Union member, is still recovering from a 2013 financial crisis that was spurred by the country's exposure to Greek debt and years of fiscal slippage under the previous president, who was a member of the left-leaning AKEL party. The major economic slump saw unemployment soar and salaries slashed, forcing a newly-elected Anastasiades to negotiate a harsh bailout with international creditors.

Five years later, Anastasiades has taken credit for steering Cyprus' economy back on track towards recovery.

Malas, meanwhile, presented himself as the youthful leader who would give crisis-squeezed households a break. He blamed Anastasiades for backtracking and accepting the rescue package that forced the seizure of savings over €100,000 (around $125,000) in Cyprus' two largest banks.