Greek and Turkish Cypriot leaders have accepted UN chief Antonio Guterres' invitation to return to the negotiating table. Guterres said he would consult with the UK, EU, Greece and Turkey on timing. 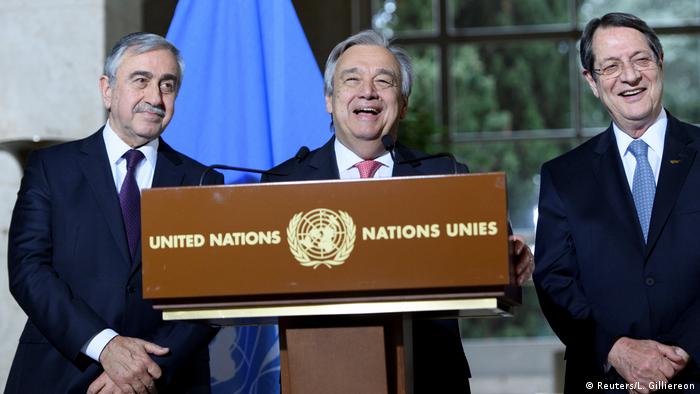 Guterres announced the new round of talks following a four-hour meeting with the Greek Cypriot leader Nicos Anastasiades (above, right) and his Turkish Cypriot counterpart Mustafa Akinciat at UN headquarters in New York on Sunday.

Guterres said "all agreed that the chapter on security and guarantees is of vital importance to the two communities."

"Progress in this chapter is an essential element in reaching an overall agreement and in building trust between the two communities in relation to their future security," he said, adding that all issues would be negotiated interdependently.

The Greek Cypriot side had been demanding that the withdrawal of Turkish troops be discussed at the conference in Geneva, while the Turkish Cypriot side wants the conference to focus on broader issues of power-sharing, property rights and territory for the creation of a new federation. Akinci told reporters that "the reason why we are here is the impasse created by one side's insistence on putting forward pre-conditions."

Anastasiades hit back, saying "I am not here for a blame game," although added that he hoped the meeting could "pave the way for a constructive dialogue, in order to reach, not just progress, but a settlement."

"What we need from now on is political will and determination, more than ever," said Akinci.

Guterres told reporters all three had "agreed on the need to reconvene the conference on Cyprus in June," adding that no firm date had been announced.

The UN-led talks collapsed nine days ago after the sides failed to agree on the terms to advance the reunification talks toward a final summit. In January, an international conference on Cyprus had opened in Geneva with representatives from Britain, Greece and Turkey - the island's three guarantor powers.

On May 26, UN envoy Espen Barth Eide said lingering differences were blocking the convening of a second conference on finalizing a deal.

The Mediterranean island has been divided since 1974, when Turkish troops invaded its northern third in response to an Athens-inspired coup seeking union with Greece. Turkey maintains some 35,000 troops in the north of the island.

Greek and Turkish Cypriots join together to march for reunification

The protesters marched to the office of the Turkish Cypriot leader Mustafa Akinci and handed him a peace declaration. But any peace declaration between the two leaders will have to be ratified in public referenda. (14.12.2016)

Greek Cypriot leader Nicos Anastasiades has started talks with his Turkish Cypriot counterpart Mustafa Ankinci to discuss the reunification of the country. The talks are expected to last all week. (09.01.2017)

Coronavirus: Germany to use new antibody-based drug 4h ago