A massive cyclone has prompted red alerts across the Pacific nation of Vanuatu. Fears of widespread destruction are compounded by concerns it might lead to the first introduction of COVID-19 there. 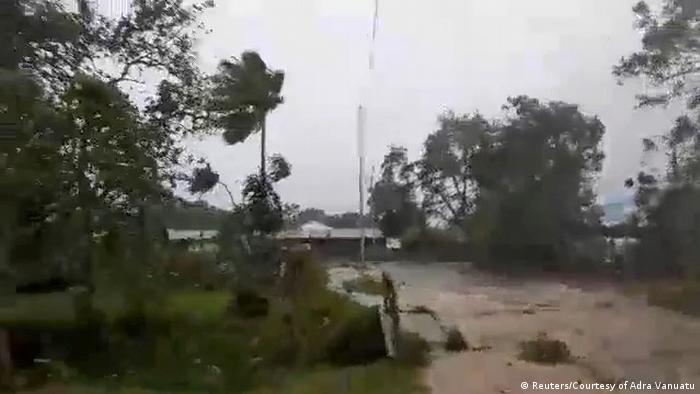 Tropical Cyclone Harold hit the Pacific island nation of Vanuatu on Monday after sweeping through the Solomon Islands last week, leaving 27 dead after they were washed from a ferry that ignored weather warnings.

The cyclone, which made landfall on Vanuatu's largest island, Espiritu Santo, in the morning, brought winds of up to 235 kph (145 mph) as it headed for the country's second-largest town, Luganville, home to 16,500 people. Local media have reported that the council building in the town has already been knocked down by the storm.

The category-five storm — the highest rating — is expected to pass north of the capital, Port Vila, early on Tuesday.

Read more: Why Vanuatu is the world's most at-risk country for natural disasters

Officials have warned of flash flooding in the nation of 300,000, which was devastated by Cyclone Pam, another category-five storm, in 2015. Pam was estimated by the World Bank to have wiped out almost two-thirds of Vanuatu's economic capacity.

Fears are also rife that a relief operation like the one needed after Pam risks bringing the novel coronavirus to the country, which lacks the necessary health infrastructure to cope with such an outbreak.

"There have been no confirmed cases of COVID-19 in Vanuatu, but a significant disaster at this time could present serious logistical challenges to delivering lifesaving aid," said the Vanuatu director of the charity Oxfam, Elizabeth Faerua.

Although the country has no confirmed COVID-19 cases, it had still imposed emergency measures such as closing borders and banning public meetings. Those bans on meetings have now been temporarily suspended in view of the coming cyclone to allow people to gather at evacuation centers.

Vanuatu consists of 83 islands and is divided into six provinces, of which three have been placed on red alert.

Cyclone Idai struck southeast Africa in March 2019, killing at least 1,300 people in Zimbabwe, Mozambique and Malawi. A year later, DW visited desperate survivors in Zimbabwe, where many are still living in tents. (14.03.2020)

As Manaro volcano in Vanuatu continues to spew smoke and ash, the government of the Pacific country launched a compulsory evacuation effort on the island of Ambae. All 11,000 residents have been ordered to leave. (27.07.2018)