Cyclone Idai struck southeast Africa in March 2019, killing at least 1,300 people in Zimbabwe, Mozambique and Malawi. A year later, DW visited desperate survivors in Zimbabwe, where many are still living in tents.

Peter Mutisi, a survivor of Cyclone Idai, struggles to come to terms with his loss each time he visits the place that used to be his residence. His house and 200 others were destroyed when the cyclone swept through the once-bustling township of Kopa Chimanimani, in eastern Zimbabwe. The ruins are now covered by huge rocks that tumbled down from the mountains during the storm. Mutisi's wife has been missing since the cyclone devastated the area, and he doesn't know if she's still alive.

A reputable businessman in his area before March 2019, Mutisi was left with nothing. He is now trying to pick up the pieces, and runs a grocery store to make ends meet. "Eish! To pick up from zero is very difficult. This disaster did not leave us with anything. Disasters come at different levels and intensity, but the intensity level of Cyclone Idai was too much," he said. 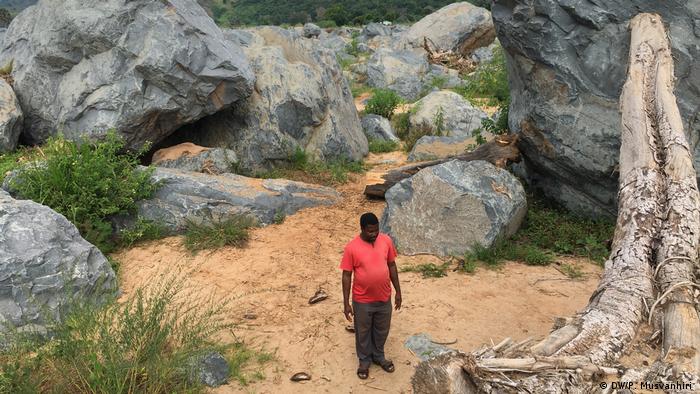 Peter Mutisi stands at what used to be his home now covered by colossal rock boulders. No sign of a home structure.

Ruth Verhey, a clinical psychologist from Friendship Bench, a mental health organization now planning to offer support to survivors in Zimbabwe, said post-trauma disorders will not go away on their own. "In the long-term, we will see a low quality of life in people. You can imagine if someone has to constantly avoid certain triggers, certain areas, reminders, and feel bad about themselves," she said. "This can lead to other conditions like depression and anxiety, where people can withdraw from life."

Survivors are still living in tents and temporary shelters provided by humanitarian agencies. The government has said that a careful geophysical study has to be carried out to locate suitable and safer places for relocation.

"We have taken a long time to look for a suitable area to relocate people. Most of the settlements are now at risk after the cyclone. Climate change is not going back, so we have to prepare for the future," July Moyo, Zimbabwe's minister of local government, told DW.

On the economic front, the eastern region that is well known for flower exports to Europe has also yet to recover from the effects of the cyclone. 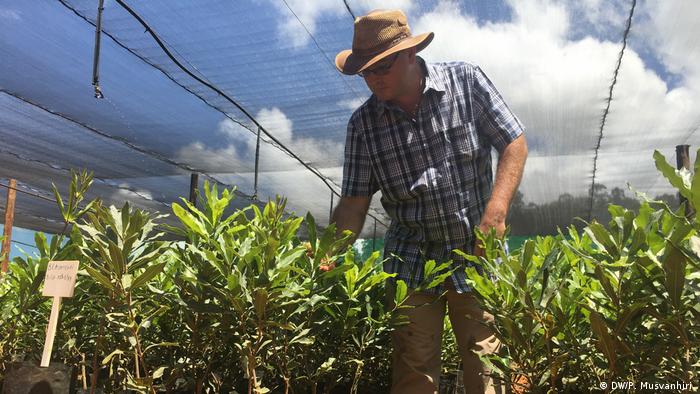 Alan Bailey, a Zimbabwean white farmer, inspects his macadamia nursery. He exports some to countries in the region.

Allan Bailey, a commercial farmer, lost an investment worth half a million US dollars because of the cyclone. He is struggling to restore the infrastructure due to the financial situation in Zimbabwe. He has since launched an online appeal to raise funds for rehabilitation.

"The damage to infrastructure was severe such that we lost our three dams and pumps. Our crop production has drastically fallen, and to recover, we are now concentrating on flower exports that have high returns," said Bailey. "Restoration of the road network and bridges has also allowed transportation of goods to markets."

Cyclone Idai was one of the worst storms to hit Zimbabwe in recent history and will not be forgotten any time soon. Hundreds of people are still missing, but relatives will still have to wait a while longer for the missing to be declared dead. According to Zimbabwe's laws, an inquiry is necessary for the missing to be declared dead. The inquiry might take long and only prolong the misery of those still seeking a closure to the matter.

Zimbabwe could suffer more loss of life from disasters if early warning systems for floods are not put in place. Eastern Chimanimani, the region worst affected by Cyclone Idai in 2019, is increasingly experiencing unusual weather patterns that are triggering flash flooding.

Cyclones Idai, Chalane and Eloise caused severe damage to schools in Beira, destroying about 1,000 classrooms. The municipality is now using repurposed buses, or "machimbombos", as classrooms. Five of them are in a Beira elementary school.

Mozambican city devastated by flooding rebuilds for the climate crisis 26.05.2021

Beira is one of the world's most vulnerable cities to climate change. That's why two years after devastating Cyclone Idai, it is rebuilding with future floods in mind.