UN agencies are aiding the rescue effort after tens of thousands of people were hit by floods across southeast Africa. The regional death toll has already reached 174 and hundreds more remain missing. 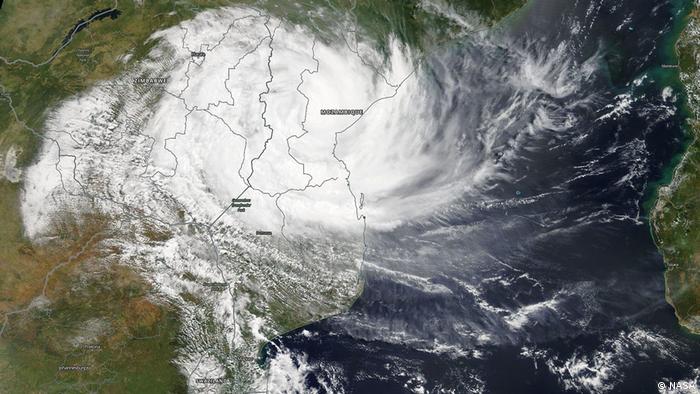 Tropical Cyclone Idai has left at least 31 people dead in eastern Zimbabwe, the government said on Saturday, continuing a trail of destruction across southeast Africa.

Since the start of the week, heavy rains and the powerful storm already killed 87 people in neighboring Mozambique and Malawi.

Zimbabwe's information ministry said the worst of the storm hit the mountainous Chimanimani region, some 350 kilometers (217 miles) southeast of the capital, Harare. A ministry tweet said at least 40 other people were still missing.

Jacob Mafume, a spokesman of the opposition Movement for Democratic Change (MDC), warned in a tweet that a "serious humanitarian crisis" is unfolding in the region.

Government spokesman Nick Mangwana said the dead included two school students who were among dozens of children trapped in a dormitory after rocks fell from a nearby mountain.

Local media said numerous homes, streets and fields were flooded, and that power and communications were down.

The ministry said Chimanimani remained cut off from the rest of the province of Manicaland, and that the cyclone was not moving.

Air force helicopters were rescuing people, but flights were being slowed by the heavy winds, media reports said.

Later the ministry said it had received reports of people being swept away to their deaths after trying to cross flooded rivers on their own after bridges were washed away.

"We urge patience as rescue is on its way. Let us not have avoidable loss of human life."

Idai battered central Mozambique on Friday, killing at least 21 people and cutting off more than half a million people in the port city of Beira.

Even before the cyclone made landfall, heavy rains earlier in the week had already claimed 66 lives and displaced 17,000 people in Mozambique, local officials said.

The United Nations said more than 1.5 million people have been affected by Idai across the three southern African countries.

UN agencies and the Red Cross are helping with rescue efforts that include delivering food, supplies and medicine by helicopter.

South Africa's military has also sent in aircraft and 10 medical personnel to help in Mozambique and Malawi, it said in a statement.

Some of the Mozambicans and Angolans who came as contract workers to East Germany 40 years ago stayed on and witnessed German unification at firsthand. Here are two of their stories. (22.02.2019)

Fears are rising for 60 other miners trapped underground for several days after a dam collapse caused the pit to flood. Reports suggest the men entered the mine illegally at night. (16.02.2019)

Will Zambia's Zimbabwean farmers head back?