Cyclone Amphan: Victim feels ′abandoned′ by international community | Asia | An in-depth look at news from across the continent | DW | 26.05.2020 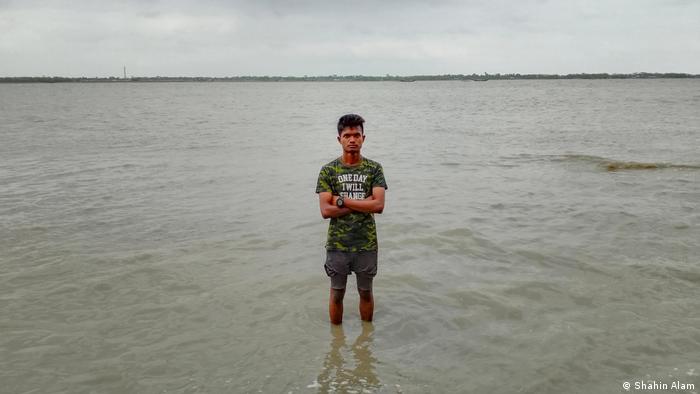 "Each passing cyclone makes us weaker," Alam told DW. "I was an 8-year-old boy when Cyclone Aila hit my village on May 25, 2009. I was playing near my house when my parents called me hurriedly, asking me to pack my stuff as the flood water was fast approaching our village. I could not pack my things as our house was submerged within minutes," Alam told DW.

"I had to swim to a nearby two-story building to take shelter. Around 200 people took refuge in the two small rooms of that building that remained above water. I spent the night there without anything to eat. It was a long, scary night."

Alam's Patakhali village is surrounded by big rivers. Most people in the village are farmers and fishermen by profession.

"Aila caused significant damage to our livelihood because farmlands and fisheries were damaged by saline water. Salinity rendered our lands uncultivable for a long time," Alam added.

Alam said that Cyclone Aila severely damaged the dikes, which were built to prevent the sea from covering the land. "They cracked at several places immediately after the cyclone hit the area. In some places, water overflowed as the dikes were not tall enough to stop the tidal waves." 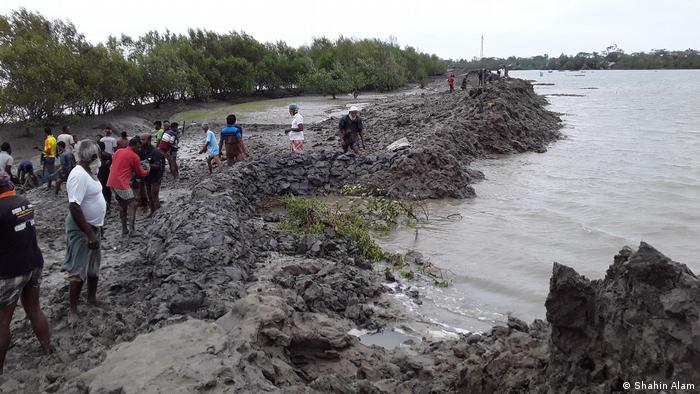 The villagers try to save the embankment during the high tide

The 19-year-old said that their main task during Cyclone Amphan was to save the embankment from breaking down during the high tide. "We wanted to protect our farmlands and shrimp enclosures from saline water. Thousands of villagers tried to elevate it before Amhpan hit our area," he said.

"But, Amphan was much more powerful than previous cyclones. The water in the rivers increased rapidly — something I had never seen before. Despite all our efforts, it didn't take long for the dikes to collapse."

Amphan was the most powerful storm to strike Bangladesh and the Indian state of West Bengal in more than a decade. The cyclone killed at least 95 people and displaced millions after it made landfall on May 20, bringing with it a dangerous storm surge and heavy rain. It also destroyed homes and crops, submerged vast areas of land and snapped power lines in Bangladesh and India.

Officials in Bangladesh said the cyclone had caused about $130 million (€118.5 million) in damage. The full extent of the destruction along India's eastern coastal region was still unclear, with reports still trickling in from remote areas.

"Cyclone Amphan also lasted longer than the previous tropical storms I had seen — it stayed for 12 hours in our area, while previous storms usually lasted five," Alam said.

Alam said there aren't enough shelters in his area. "Moreover, physical distancing to protect oneself from the novel coronavirus is not possible in the existing shelters," he added.

The frequency and strength of cyclones have increased in the Bay of Bengal area, Alam noticed. "It's been 12 years since Cyclone Aila. Three more destructive cyclones hit us after Aila — Cyclone Bulbul and Cyclone Foni in 2019."

Bangladesh's southern region is becoming increasingly prone to tropical storms due to climate change, environmentalists say. "The Sundarbans mangrove forest in the area serves as a natural barrier against tropical storms, weakening cyclones before they reach us. Without it, cyclones would have destroyed us by now," Alam said.

"Cyclones don't scare me anymore; what scares me is that we are dying slowly because of the climate change. All our farmlands and shrimp enclosures have been submerged once again. It means we won't be able to cultivate anything in the coming months. We have to rely on support from non-governmental organizations."

The 19-year-old student complains that the villagers haven't received much support from the government.

"We told authorities several times that the dikes were neither repaired nor elevated after the 2009 cyclone. They didn't do anything about it."

"Sometimes I feel that the international community has also abandoned us. They have left us to die slowly. The West is largely responsible for global warming, which has resulted in higher sea levels. We are the ones who have to suffer because of it. Still, we don't see any international initiative for our protection," Alam complained.