As deals with the US continue to accelerate, Cuba has signed a deal with Google to enable faster access to content from the US tech giant. Internet service is notoriously limited and slow on the communist island. 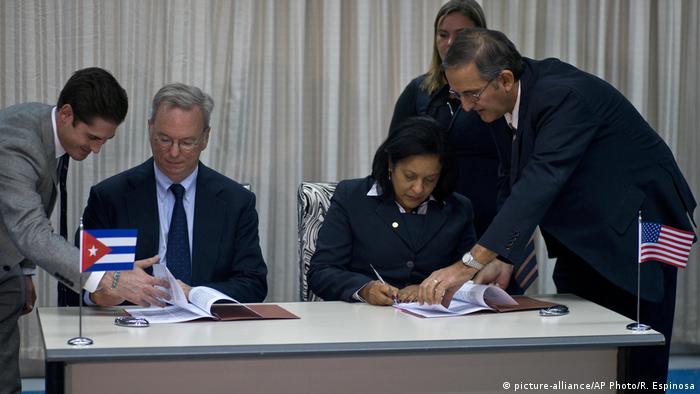 Under the deal, Cuba will gain access to a network called Google Global Cache, which stores content from Google sites such as Gmail and YouTube on local servers, accelerating users' access, Google said in a statement.

At the press conference before the deal was announced, journalists were not allowed to ask any questions. The signatories later posed for photographs, with Schmidt also posing at one point alongside a large photo of late Cuban leader Fidel Castro.

Havanna has allowed Cubans to access some Google content since 2014, but connection times can be extremely slow, with all data currently arriving via fiber optic cable from Venezuela.

The communist island has some 900 state-run internet cafes and 200 WiFi hotspots, and yet the the country continues to have of the lowest internet access rates in the world, with just one-third of Cubans going online last year, official statistics say.

Connecting, however, costs $2 an hour (1.87 euros) - a fortune in a country where the average monthly income is just $29. Only restricted professions such as journalists and doctors are allowed internet service at home.

The Google deal comes as the historic thaw between the old Cold War foes faces an uncertain future under President-elect Donald Trump. As a result, Cuban officials now appear to be accelerating their approvals of deals with US companies in an attempt to build momentum behind US-Cuba normalization before Trump takes office on January 20.

The Google pact came less than a week after Cuba gave three US cruise companies permission to begin sailing to the island next year. Other deals, including one with General Electric, are also reportedly in the works.

Expanding Cuba's internet access was one of the goals set out by US President Barack Obama's in December 2014 as part of the US' rapprochement with the island.

Trump, however, has previously criticized Obama for not reaching more deals with Cuba on democracy, human rights and the economy.

The United States has announced new measures to further ease trade and financial restrictions on Cuba. The changes are part of a process to normalize relations between the two former Cold War foes. (14.10.2016)

How green is your internet?

The massive servers required to process your tweets and videos are set to cause more carbon emissions than aviation. This week, Google pledged to power all its servers from renewables. (08.12.2016)