Authorities evicted a group of artists from a collective in Havana, citing coronavirus concerns. The artists have often used their performances to criticize the government. 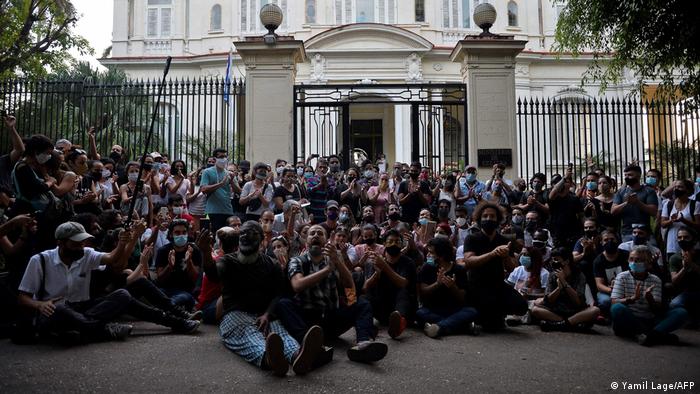 More than 150 people demonstrated outside of Cuba's Culture Ministry on Friday in a rare protest against a recent crackdown on an artistic collective.

The protest started with two dozen people in the morning but grew throughout the day. Internationally renowned Cuban artist Tania Bruguera and filmmaker Fernando Perez joined in.

The protest came after Cuban authorities evicted the 14 members of the San Isidro Movement from their headquarters in Old Havana on Thursday. The members were holding a hunger strike there to protest the imprisonment of a rapper on contempt charges.

Authorities said the eviction was necessary due to COVID-19 protocols since one returned from Mexico via the United States and did not properly quarantine. Two of the members were arrested after they refused to go home.

Some Cubans said social media platforms in the country were briefly shut down to prevent the news of the raid from spreading online. Access to news sites with a focus on Cuba has been blocked in the country.

"The way they were already treating them left us constantly uneasy, also like our own freedom was being threatened," said Yunior Garcia, an actor and one of the organizers of the protest. "But what happened yesterday was the straw that broke the camel's back."

Protesters refused to leave the premises until they meet with Vice Minister Fernando Rojas. 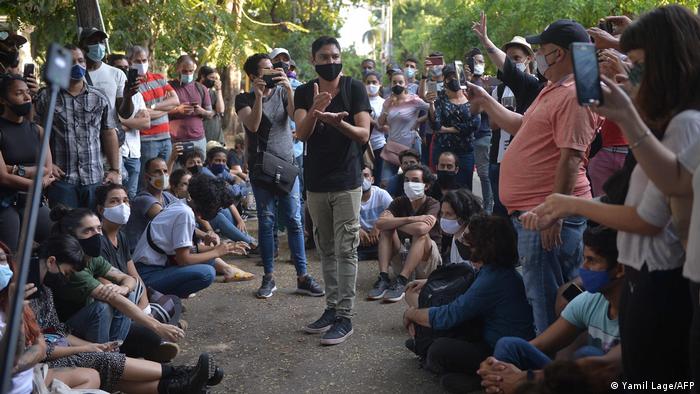 "On the one hand, we do not have much confidence, but, on the other, we feel that it is an obligation," said activist Michel Matos. "They are public officials of this country and this has become a political situation."

Demonstrations are rare in Cuba, where permission is not usually given. Security and uniformed police watched the protest from a distance and mostly did not interfere.

The artists have often used their performances to criticize the government. The government called the San Isidro Movement, as well as other dissidents, mercenaries directed by the US to destabilize the country.

The Dutch and Czech governments voiced their concerns about human rights in Cuba. Human rights group Amnesty International and other rights groups also shared their worries.

Amnesty International called for the release of the two members who were arrested Thursday, calling them "prisoners of conscience, imprisoned solely because of their consciously held beliefs."

Cuba joins the race for vaccine against the coronavirus

Cuba has a lot of experience in vaccine research. The Caribbean island is currently working on one against the novel coronavirus while Russia is planning to have its own vaccine produced in Cuba.