Thousands of demonstrators have taken to the streets in recent days in protest at food shortages and rising prices. The Cuban Interior Ministry said it "mourns the death" of Diubis Laurencio Tejeda. 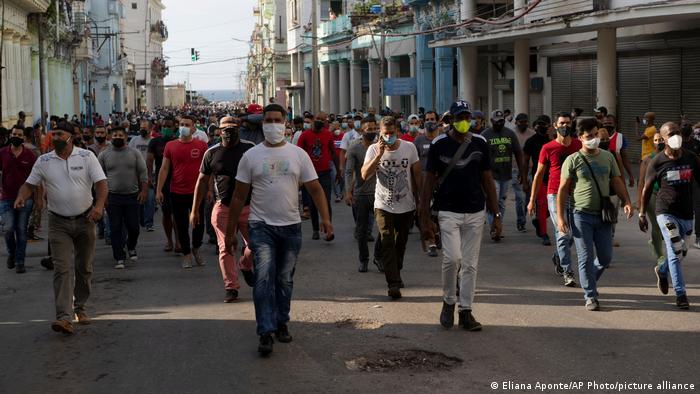 One man died and several others were injured during recent anti-government protests , according to a Cuban Interior Ministry statement Tuesday.

The ministry said it "mourns the death" of a 36-year-old named as Diubis Laurencio Tejeda.

Tejeda died after a clash between protesters and police in the Arroyo Naranjo municipality on the outskirts of Havana on Monday.

Authorities said an unspecified number of people were arrested and there were several people wounded, including some police officers.

Why are Cubans protesting?

Anti-government demonstrations broke out on Sunday, continuing on Monday and Tuesday.

Protesters expressed anger over food shortages, the increasing costs of living and other grievances against the government.

"The problem is that the government doesn't have any foreign exchange currency to import food or medicine or fuel, so there are shortages of all basic goods in the stores," American University professor and Latin America expert William LeoGrande told DW.

Cuba is currently grappling with its worst economic crisis since the fall of the Soviet Union and a record number of COVID-19 cases.

What has been the Cuban government response?

The protests have been met with a wave of arrests, as well as allegations of police brutality.

Observers say more than 100 people have been detained, including independent journalists and dissidents.

However, Foreign Minister Bruno Rodriguez insisted on Tuesday that the people still support "the revolution and their government."

Mobile internet was down in Cuba for most of Sunday and on Monday.

Authorities have also restricted access to social media and messaging platforms including Facebook and WhatsApp, according to global internet monitoring firm NetBlocks.

Cuban President Miguel Diaz-Canel has blamed the US for the upheaval.

He said Monday that Washington was pursuing a "policy of economic suffocation to provoke social unrest."

And what is the United States' reaction?

Washington has urged Cuba to end the internet restrictions and show "respect for the voice of the people by opening all means of communication, both online and offline."

"Shutting down technology, shutting down information pathways, that does nothing to address the legitimate needs and aspirations of the Cuban people," State Department spokesman Ned Price told reporters.

Cuba has been under US sanctions for almost 60 years.

The Cuban activist and artist Luis Manuel Otero Alcantara has described his stay in hospital lasting almost a month. He has said he was isolated and watched over.