As Euro 2012 co-hosts, Poland took steps to curb fan violence and racism. Four years later, the situation is fundamentally different. What are the results of those efforts ahead of Poland's match against Germany tonight? 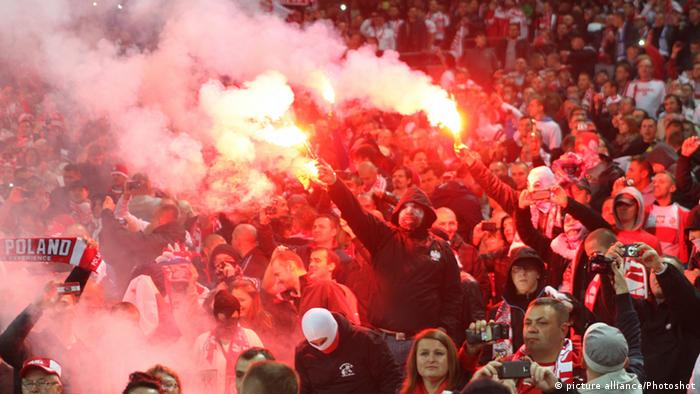 A crusader defending Europe with a sword while threatening to capsize a refugee boat on the Mediterranean in the fight against the "Islamization" of Poland: that was the image the Slask Wroclaw ultras depicted in a pre-match display last Autumn.

This season, UEFA asked clubs to donate a portion of ticket proceeds from European matches to help ease the refugee crisis. Fans of Lech Poznan called for a boycott of the campaign. Just 8,000 instead of the regular 20,000 attended the next home match. At a Legia Warsaw game, fans chanted: "Lost sheep. Welcome to hell."

"A scary shift to the right is taking place in Poland," says Rafal Pankowski, a Polish professor and expert on extremism, who has been studying the country's fan scene for more than two decades.

Through anti-Muslim banners, songs and street protests, the hostile attitude towards refugees is clearly visible in almost all fan groups.

"Most ultras are reinforcing the national conservative climate," says Pankowski. "Unfortunately there is almost no protest against it in football. So the overall picture does not look as bright as we had hoped it would four years ago."

Rafal Pankowski conducts his research at the Collegium Civitas in Warsaw. He was one of the founders of the "Nigdy Wiecej," or "Never Again," initiative in 1996. With the Euro 2012 tournament in mind, the organization launched one of the most extensive programs in European football, with support from UEFA and the network FARE (Football Against Racism in Europe). The program consisted of workshops, events, tournaments and training for teachers, coaches and security personnel. 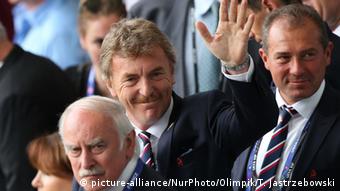 In the four years since Euro 2012, support for prevention programs from politicians, UEFA and the media has continued to diminish, says Pankowski. "Unfortunately the Polish FA has hindered rather than helped the work."

FA head Zbigniew Boniek, one the most successful Polish players of all time, cheered the right wing populist Law and Justice party's recent election victory. He posted a photo on Twitter of Jacek Purski, one of the leading figures of the "Never Again" initiative. Boniek then made reference to a right-wing magazine. What followed were insults and threats directed at Purski.

Fan projects are only the beginning

In the current climate, no Polish fan groups have taken a stand against right-wing politics. Instead, they are stirring up controversy. Poznan fans, for example, displayed a poster with the words: "The Pila Legion - The Blood of our Race." The words come from the right-wing extremist band "Konkwista88". The majority of the stadium reacted indifferently to the rhetoric, likely out of fear of the ultras.

"We would like to support the strong personalities in the fan scene," says Dariusz Lapinski. "So that the younger fans in the future can guide them and improve the situation."

Lapinski attended university in Frankfurt an der Oder, just over the Polish border in Germany. He studied nationalism and has been researching the fan scene in Germany for many years. With Euro 2012 in mind, he returned to Poland to set up socio-educational fan projects based on the German model. Since then, the projects have expanded to 12 different places around the country, with more expected to follow. Lapinski works for the Polish FA, and is known around Europe as a fan expert. It is his job to win the trust of the supporters and the backing of the community and to make sure there are enough social workers for the various projects.

Clubs in Poland are frequently hit with fines and crowd bans in stadiums. Lapinski has also keeping tabs on how the country's shift to the right is playing out in fan groups.

For a long time, the Law and Justice party has had friendly words for the "patriotic messages" of the ultras. Taking it a step further, the Euroskeptic parliamentarian Krystyna Pawlowicz questioned the "national loyalty" of national team captain and Bayern Munich striker Robert Lewandowski. He was one of the few leading Polish athletes who spoke out in support of alleviating the plight of refugees coming to Europe. His agent is in close contact with the "Never Again" initiative. 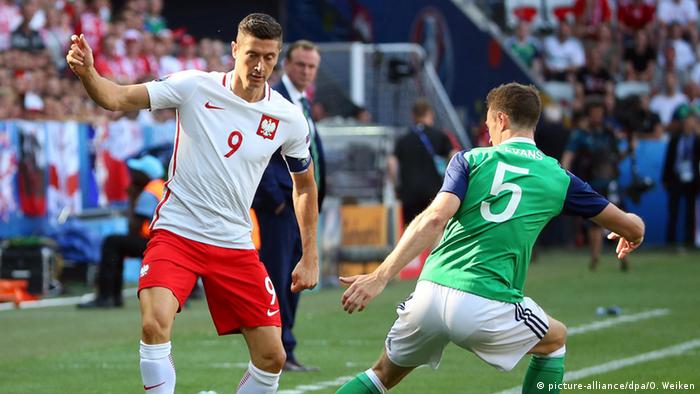 "The fans do not want to be dictated by party policy," says Darius Lapinski. "They have had too many bad experiences."

Still, many fans attend protests against refugees - similar to the far-right Pegida and Legida rallies in Dresden and Leipzig respectively, where right-wing supporters of Dynamo Dresden and Lokomotive Leipzig play a significant role.

"The risk of tragic incidents"

What impact do these developments have on the Euros in France, where Poland plays Germany on Thursday and Ukraine on Monday?

"I do not think many right-wing extremist fans will travel, but a few will go certainly," says Rafal Pankowski. "We are not assuming there will be riots in the stadiums, but a lot of people with African and Arab roots live in France and will be around the stadiums. I hope that there will be no tragic incidents, but the risk is there."

In France, 19 of the 24 participating countries have set up mobile liaison offices - organized by fans for fans to create a friendly atmosphere. That includes countries like Russia, Ukraine and Hungary, where many violent and nationalist fans play a prominent role. There is no Polish fan liaison office. Dariusz Lapinski lobbied long and hard for exactly such a project, but there was not enough interest.

Russian hooligans: Brawling for the fatherland

UEFA has threatened to disqualify Russia and England from Euro 2016 in the wake of fan violence from both squads. Another incident in Wednesday's match against Slovakia could see Russia booted from the tournament. (14.06.2016)

Germany play down security concerns ahead of return to St. Denis

Germany can take a big step towards finishing first in Group C with a win over Poland on Thursday. They will be looking to do so at a venue they know all too well - one of the scenes of last November’s Paris attacks. (14.06.2016)

Russia have been heavily punished by UEFA for the behavior of their fans at Euro 2016. It is the right decision, but also one that is only made in worst-case scenarios, writes DW's Jens Krepela. (14.06.2016)

Europe's governing football body has said Russia will be disqualified from Euro 2016 if there are further issues with crowd violence. The decision follows fan clashes at a match between Russia and England. (14.06.2016)

Manchester United are paired to meet Europa League debutants Granada in the quarterfinals, although it's not clear where. Meanwhile, Arsenal face Slavia Prague, Ajax meet Roma, and Dinamo Zagreb take on Villarreal.