A court handed Ivo Sanader a lengthy prison sentence for embezzling millions in state funds for personal gain. The court ruled that he had facilitated fictitious deals with state-run firms and handled illegal donations. 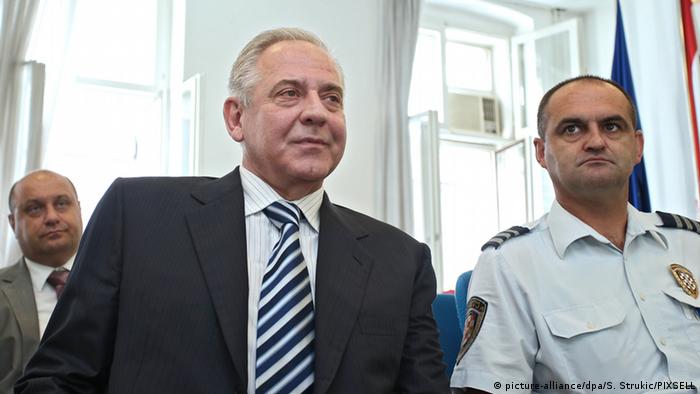 A Croatian court on Friday convicted former prime minister Ivo Sanader of corruption and sentenced him to eight years in jail for funnelling millions in state cash through an advertising agency for personal gain.

The Country Court in Zagreb ruled that Sanader had created a group to perform criminal activities which acted upon his instructions. The 67-year-old served as Croatia's prime minister from 2003 to 2009.

Sanader, who led Croatia into NATO during his years in office, had organized a plot to "acquire significant financial gain" for himself and to finance his party, the Croatian Democratic Union (HDZ), which was also accused in the case, according to the ruling.

The verdict and sentence came in Sanader's retrial in the corruption case. His previous conviction was overturned on procedural grounds.

Sanader, who did not attend Friday's court proceedings as he was recovering from surgery, has denied the allegations and is expected to appeal again.

One associate was acquitted, while two others were convicted in the same case on Friday, receiving prison sentences of up to 2 years and 10 months. His former party, the HDZ, which currently governs Croatia, was fined 3.5 million kuna (roughly €460,000, or $545,000) and ordered to return around 14 million kuna.

The party said in a statement it rejected "any collective responsibility" and that it would appeal the ruling. Sanader is the highest-ranking official to be tried for graft in Croatia. He has faced several indictments and lengthy proceedings in multiple trials related to corruption.

Read more:Opinion: Croatia on path towards reconciliation with Serbian minority

The so-called Fimi Media case has become a symbol of party and state corruption in Croatia, which joined the European Union in 2013.

Sanader was first sentenced to nine years in jail in the same case in 2014, in what was the first trial of its kind against a Croatian political party. However, the top court scrapped the ruling citing violations of criminal proceedings.

Sanader has been serving a six-year sentence on a separate corruption conviction since 2019.

Will the Balkans become a new coronavirus hotspot?