Crisis of credibility for citizen journalists in Syria | Middle East | News and analysis of events in the Arab world | DW | 20.06.2017

Crisis of credibility for citizen journalists in Syria

Citizen journalists have helped fill the media gap in Syria, after the regime clamped down on professional reporters. But how credible are these self-proclaimed journalists? 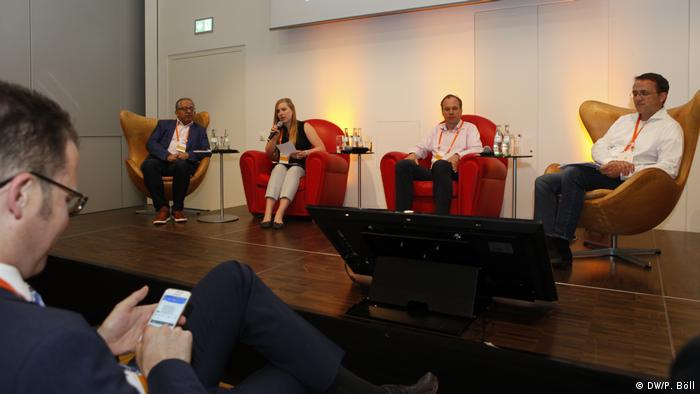 Earlier this year, the press freedom rights watchdog Reporters Without Borders released its Press Freedom Index. North Korea was the most dangerous at position 180, the bottom of the list. Syria was 177.

Ever since the uprising against Syrian President Bashar al-Assad in 2011 and the ensuing civil war, there has been a spike in alternative media outlets in the country, triggered by the brutal oppression of mainstream media.

"There has never been, in recent history, free press in Syria," said Christoph Dreyer of Reporters Without Borders Germany. He was speaking at a session called "On the frontline - citizen journalism in Syria," hosted by the Konrad Adenauer Foundation at DW's Global Media Forum.

Social media and the fog of war in Aleppo

As Syrian government forces advanced into the last rebel-held territory of eastern Aleppo, a second battle over the narrative of this crucial moment is emerging on social media. (16.12.2016)

"Freedom of press was limited under Assad's regime," Dreyer explained. "Media was either under direct regime control or in the hands of pro-Assad businessmen. When the uprising started, the regime began to quickly go after journalists, one of the first things they did was kick out foreign journalists."

"Last year at least 300 journalists fled abroad," he added. "Some are trying to do media projects from neighboring countries like Jordan, Lebanon and Turkey."

The rise of citizen journalists

Citizen journalists have sprung up in various areas in Syria to bridge the media gap, according to Dreyer, especially after professional journalists either fled or had to work in the state media to survive.

But many of the citizen journalists in Syria have had a tough time proving their credibility.

"The problem with citizen journalists is that they... belong to a certain group of people," said Amjad Tadros, co-founder of Syria Direct, a news outlet based in Jordan that tries to train journalists into producing more objective reporting. "They are eager missionaries, who have a mission - [for example] one of their family members was killed by the regime. So they have a very strong belief about the issue. Some of them I call mercenaries - they are paid to talk about it - and others are simply misfits."

Syrian citizen journalist Abdel Aziz, who now lives in Italy after he was granted asylum, highlighted the difficulties in pursuing journalism as an alternative career.

"The problems that we faced as freelancers were that the editors were always asking for honest sources ... This is a big problem, nobody depends on the activists on the ground," Aziz said, adding that those activists deserved more trust.

However, it is often difficult to figure out what untrained journalists mean when they say or write about a particular issue.

"Citizen journalists talk, but they need an interpreter to interpret what's coming out of their tweets and Facebook posts and the blogs they write," Tadros said, adding that citizen journalists often used phrases like "it is heard" and "it is known."

"We were sick and tired of the news coming out of Syria. There were too many lies everywhere... We were trying to find the truth," Tadros said, explaining why he and his co-founders decided to set up Syria Direct. Their aim was to find out what was actually happening in the country. This was a difficult task, since, according to Tadros, everyone in Syria had a preconceived idea about the conflict.  Most journalists were pro-opposition and anti-regime.

Syria Direct now finds journalists in their early 20s and educates them in the Jordanian capital, Amman. Reporters are trained in the five W's (who, what, where, when and why), asking relevant questions and urged to verify their information from two independent sources. The outlet thus ensures that the news it publishes is free of bias and provides relevant information, Tadros said.

Unfortunately, not taking sides also has its disadvantages.

"Everybody in Syria hates us; the Kurds hate us, ["Islamic State"] hates us, the regime hates us and the rebels hate us, which I think is a good sign, because we need somebody to say something that's meaningful," Tadros said. "We want to make things move forward. People have to understand the facts, because the truth will come out anyway."