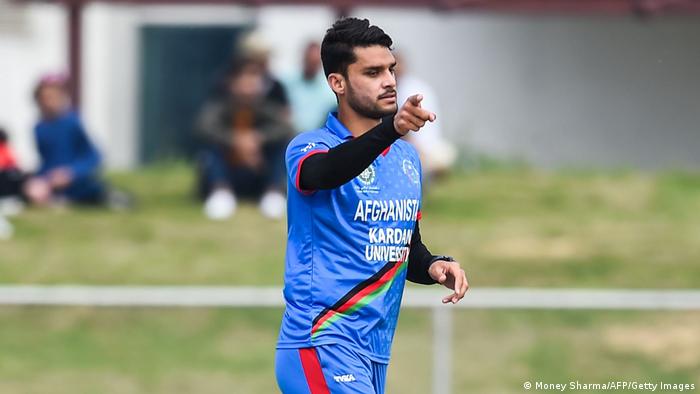 As the Taliban were pushed out of Afghanistan 20 years ago, the first seeds of a cricketing obsession were being sown.

When the regime changed, a men's national team was set up in 2001, mainly thanks to Pakistanis teaching the game to Afghan refugees. It's now unquestionably the country's most popular sport.

The men's side have since enjoyed an unprecedented rise. From nowhere in 2000 to a first World Cup in 2010, a world record score in 2019 and a handful of the best players in the world, Afghanistan's men were on a roll. Then, just like in every other facet of life in Afghanistan, the situation changed last month.

As their compatriots tried to flee in harrowing circumstances, male cricketers like Naveen ul-Haq were performing at the highest level abroad, many in England. The 22-year-old Kabul native actually went on to be the leading wicket taker in the high profile Twenty20 (T20) Blast competition, but his mind was never far from his home.

He told DW that representing his country in such a way "means everything," describing how cricket is "more than a game" to the Afghan people.

Tuba Sangar, as well as 25 female players and seven staff members that she worked with as director of women's cricket at the Afghanistan Cricket Board (ACB), know that, in this case, "more than a game" is not empty talk.

"Their lives are in danger, they change their location, they block their numbers and I can't make any contact with them, so it's big trouble," she told DW of those former colleagues still in the country. "I just want to help them and I want other countries to listen to my words and help my team to get out of Afghanistan."

Sangar managed to escape the country at the end of August after spending time at the Baran Camp near Kabul airport and sleeping in her car. After resigning her post in order to speak out, she is now seeking housing in Canada along with some members of her family. Other relatives left behind have told her that officials have come looking for her since, but been told nothing of her whereabouts.

As well as fearing for the safety of the 22 players and remaining staff whose whereabouts are unknown — and whose public involvement in the sport makes them a target — she is distraught about the loss of livelihood, joy and hope that an expected ban on women playing sport will bring. The 25 female players, given contracts in November 2020, were thefirst women to officially represent the country in the sport. 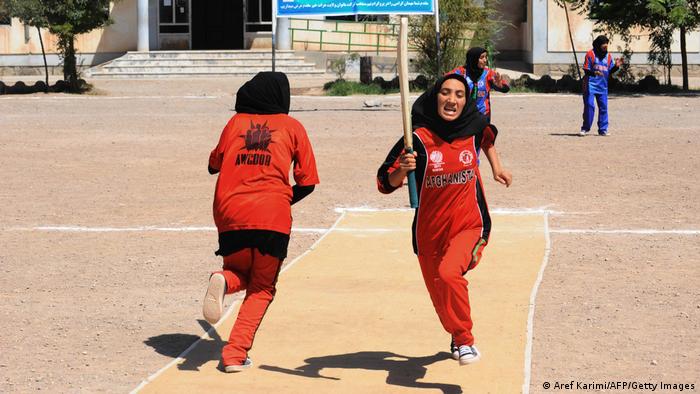 Women's cricket in Afghanistan had made significant strides in recent years but can that continue?

"Playing cricket is not just a game of bat and ball, it's a game of dreams, especially for girls. Several years back, from 2014 [when she started her job], we've had a lot of ups and downs, a lot of problems. But there was a hope that one day we'll play for Afghanistan. But right now, there is no hope for the future. They will not allow us to play. When Taliban won't allow girls outside for their basic needs, how will they allow them to play cricket?"

Currently the position of the ACB, Sangar's former employers, is unclear. Chairman Azizullah Fazli has been reported as telling SBS Radio Pashto more than two weeks ago that "we will give you our clear position on how we will allow women to play cricket. Very soon."

No such statement has arrived. Sangar said she believes further allusions that the ACB hopes to seek out and help its female players to be "a big lie."

"We haven't received any invitation and nobody has talked about it with us," she said.

The delay in providing any assurances about the future of the women's game is looked upon by some as an exercise in ensuring that the men's team can play in October's Twenty20 World Cup — the shortest, most lucrative format of the game — and an historic one-off Test match — the traditional and most prestigious format — in Australia in November. 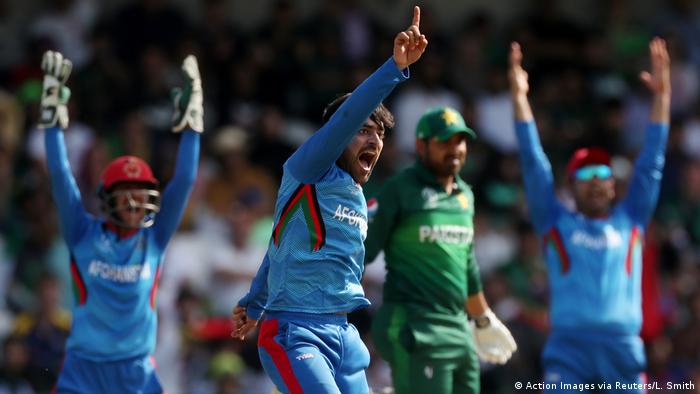 Rashid Khan (center), one of the world's best short form bowlers, in action at the 2019 World Cup

The rules of cricket's governing body, the International Cricket Council (ICC), state that all 12 full members must have a national women's team. Afghanistan is one of these members.

Given that, contrary to Fazli's suggestion, the deputy head of the Taliban's cultural commission Ahmadullah Wasiq recently said "I don't think women will be allowed to play cricket because it is not necessary that women should play cricket," the ICC have a decision to make with regard to the men's T20 World Cup, slated to start in the UAE on October 17.

While the ICC have yet to show their hand, Cricket Australia have already issued a statement. "If recent media reports that women’s cricket will not be supported in Afghanistan are substantiated, Cricket Australia would have no alternative but to not host Afghanistan for the proposed Test match due to be played in Hobart," the organization said earlier this month.

For ul-Haq, missing out on Australia, or particularly the World Cup, would mean punishing the wrong people.

"I don’t think it’s a right thing to be saying that if Afghanistan don’t have a women's team, the men's team should also suffer for it," he said.

"The world needs to understand that it will take time for the things to change and get back to normal and they should stand with Afghanistan at this hard time."

Though Sangar is angry at the ACB and feels she must speak out about the abandonment of women's cricket, she also believes the men should not be barred from competing. She insists that players like ul-Haq and Rashid Khan, one of the best T20 bowlers in the world, provide inspiration to girls in Afghanistan. Both play in the top overseas leagues on huge contracts and represent their country on the biggest stages.

"There are some people playing politics with Afghanistan cricket right now," she added. "Sport is not related to politics. Everyone has their own right to play any sport, especially cricket, so I hope this problem can be solved one day."

Though there have been some reports that the Taliban have softened their position on women being granted access to some areas of society, like education for example, this means nothing until action is seen.

As soon as it's possible, Sangar wants to see a women's Afghanistan team playing in a neutral country and include those who have been exiled. But she still longs to get back to the work she has been denied from continuing by the Taliban, who have, she says, instructed the ACB to ban female employees from entering their office.

"I am mad about these people who gave us wings to fly but then suddenly cut our wings and leave us alone," she concluded.

While ul-Haq, Khan and the rest of the men's team prepare for the World Cup under the shadow of the Taliban's return, for Sangar, finding a place to live and perhaps a job in Canadian cricket occupies her days. But the safety and whereabouts of the cricketing colleagues she left behind is always at the front of her mind. This is much more than a game.

Female footballer: 'When I see the Taliban on the street, I feel so scared'

Speaking to DW from her basement, a female Afghan football player describes her horror at the return of the Taliban and begs for help. While aid efforts continue behind the scenes, here is her story.