The coronavirus vaccine campaign in Gibraltar is already over and yet it hasn't even started in many other countries. What’s the reason for that — and could the situation be about to change? 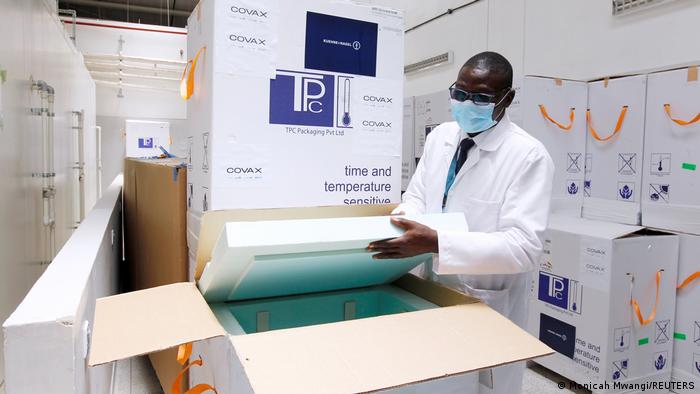 Kenya has received some delivieries of vaccine, but Africa is largely undersupplied

More than 600 million vaccinations have taken place worldwide, according to the World Health Organization (WHO). But while close to 100% of Gibraltar's population, for instance, have already been vaccinated, countries like Nicaragua are still waiting to receive their first doses of vaccine. WHO Secretary-General Tedros Adhanom Ghebreyesus referred to the situation on Tuesday as a "farce." He called for global production to be cranked up and vaccines to be fairly distributed to tackle the acute phase of the pandemic.

On the global vaccination map, there is still a whole swath of African countries awaiting supplies — from Libya to Madagascar. Those countries do not even feature in the WHO's vaccination statistics. The picture is similar in Central Asia, as well as in individual countries such as North Korea, Cuba, and Bosnia and Herzegovina. That does not, however, necessarily mean that the respective countries have received absolutely no shots up to now. Bosnia is due to receive its first big, direct delivery at the end of May, but it has already received some vaccines donated by neighboring Serbia.

"With regard to Africa, we have the good news that 44 countries have already received vaccine supplies. But, conversely, this also means, of course, that 10 countries have received no vaccines up to now," says Clemens Schwanhold, political officer at the nongovernmental organization ONE.

Madagascar, Burundi and Eritrea are among those countries whose governments believed that the virus could be fought by other means. Tanzania, in the meantime, has undergone a change of heart after the sudden death of coronavirus skeptic President John Magufuli following unconfirmed rumors of a COVID infection. Schwanhold believes the government led by Magufuli's successor, President Samia Suluhu Hassan, is likely to order vaccine supplies in the next few weeks. "Then it would still take a few months, ideally a few weeks, until anything arrives. In the second half of the year, something could be possible."

In the interests of global health, we need to create herd immunity against the new coronavirus, including among people living in the remotest corners of the Earth. As long as the virus keeps on encountering lots of new hosts it can continue mutating and, at some point, it is possible that variants will develop that can evade all existing vaccines. "None of us is safe until we all are safe" is a common refrain about COVID-19 — and it is the idea behind the COVAX program to provide global access to vaccination. The member states of the WHO have been divided into two groups. One is made up of 98 more affluent countries, which are funding subsidized or free vaccine supplies for the 92 poorer ones. Germany is one of the COVAX program's biggest benefactors, providing almost €1 billion ($1.19 billion) in funding.

"The problem is that there are not many more vaccine doses available because the EU and the United States have already secured the large majority of them," says Sonja Weinreich, who is in charge of health issues at Brot für die Welt (Bread for the World), a relief agency run by the Protestant churches in Germany. "So this mechanism hasnt been able to properly take hold because this solidarity just doesn't exist."

A large coalition of aid organizations and other groups have called for the waiving of COVID vaccine patents to help tackle this problem. "It would allow the poorer countries — or all the companies across the world — that are able to produce vaccines to do just that. That would simply have to go hand in hand with the relevant technology transfer," Weinreich tells DW.

Brot für die Welt is one of the organizations behind this demand. One argument is, she says, that the vaccines were partially developed and produced with public funds: "It is not acceptable for something to be publicly funded and then the profits from it privatized." 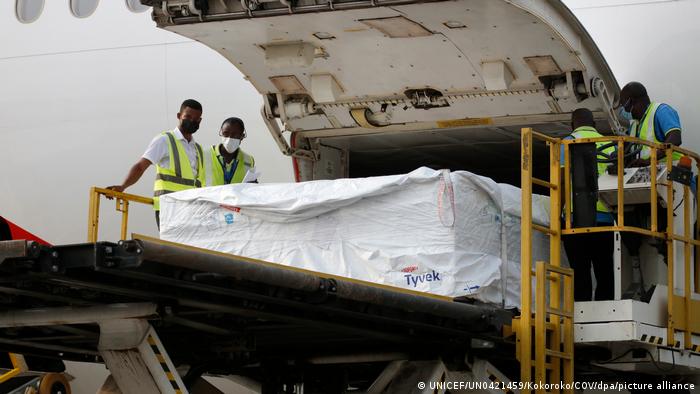 Ghana did not receive any vaccines until late February

The pharmaceutical industry, on the other hand, argues that the patents are not the sticking point. Nathalie Moll, director general of the industry lobby group the European Federation of Pharmaceutical Industries and Associations (EFPIA), told DW at the end of March: "If one company contacts another to expand vaccine production, a lot of technical know-how has to be transferred, so that the vaccines can be produced safely and efficiently in the required amounts. This is about much more than intellectual property." She said that 250 licenses had already been distributed worldwide to expand production capacity.

In the opinion of Clemens Schwanhold from ONE, such licenses are a positive step forward. Batches of AstraZeneca destined for African states are, for example, largely being produced by the Serum Institute of India, the world's biggest vaccine factory. It is questionable, he says, whether major production capacities remain that could be swiftly integrated into the global vaccine rollout: "If they first had to be built and then approved, it would take months, maybe even years," Schwanhold tells DW. 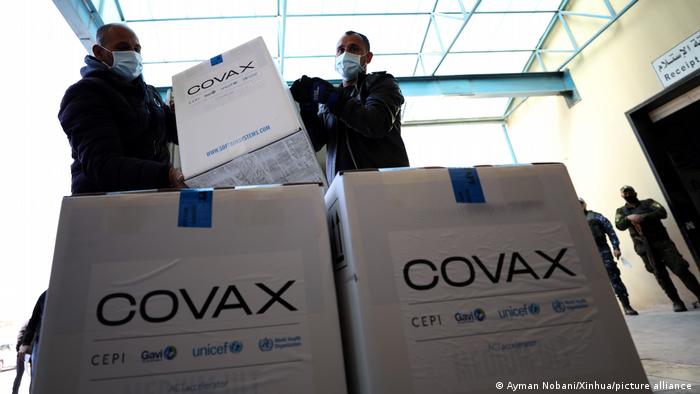 COVAX has been delivering to the Palestinian territories

Yet it is India of all places — which is so vital for world vaccine supplies — that has recently restricted the export of vaccines. The government wants to keep the supplies in India, which is currently seeing record levels of infection. The United States also has exported practically no vaccines at all, while the European Union has allowed supplies to be sent to poorer countries up to now.

Nevertheless, both Sonja Weinreich and Clemens Schwanhold are optimistic that the COVAX program's main goal can be achieved. Its aim is to vaccinate at least 20% of the population of all 92 beneficiary countries by the end of 2021, including high-risk groups and medical personnel. "I think that is feasible," says Weinreich. "In Europe, the vaccination rollout is beginning to pick up speed and a lot more vaccines should be available," she adds.

The EU has ordered more than four vaccine shots per capita from a number of manufacturers, even though only two at the most are required.  Canada has ordered more than eight. Clemens Schwanhold explains that liability issues still need to be resolved before such excess vaccine supplies can be passed on to countries in need. Manufacturers have passed their liability on to most of the states purchasing their products because of the extremely short development turnaround time. "And it is understandable that the EU does not want to be liable for any potential claims if it passes on vaccine doses."

He says that the success of the COVAX pledge depends on "all participants pulling together when it comes to funding and to the provision of raw materials." The good thing, says Schwanhold, is that: "COVAX does not have to do all this alone." The African Union has also ordered significantly more than 500 million vaccine doses, he says: "I am relatively confident that we will have vaccinated far more than 20% by the end of this year."

COVID: EU pulls out all stops to boost vaccine rollout

After facing hiccups in its COVID vaccination rollout, the European Union has been going all out to ramp up vaccine production to meet its inoculation target. But creating new capacity isn't an easy task.