Experts have said that negative publicity combined with a shortage of vaccines are keeping people from getting inoculated. The country has vaccinated just 0.8% of its total population. 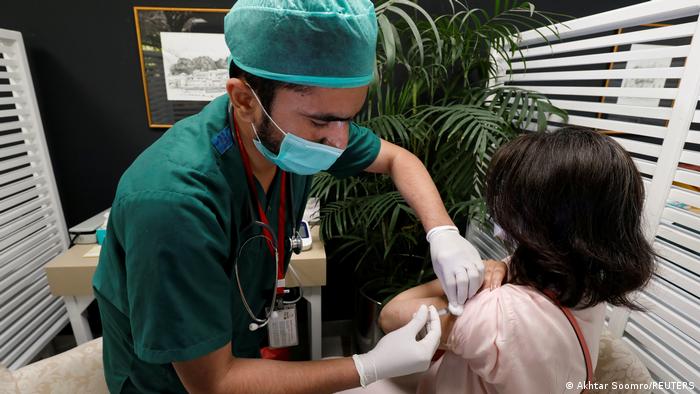 Prominent clerics and personalities have publicly voiced opposition to the vaccine

As other South Asian countries roll out their vaccine programs, critics have said that Pakistan's vaccination drive is moving along at a much slower rate.

Both the federal and provincial governments have set up hundreds of vaccination centers. However, experts say that a combination of limited vaccine availability and widespread hesitancy due to negative publicity have contributed to the low number of inoculations relative to the population.

More than 860,000 infections have been reported in the country since the start of the pandemic, while nearly 19,000 people have died.

Vaccination 'could take a decade'

Dr. Abdul Ghafoor Shoro of the Pakistan Medical Association believes it could take up to a decade to inoculate every citizen if the country continues its vaccination drive at the current pace. Even health care workers are still waiting to be vaccinated, Shoro told DW. Citizens, he added, have also expressed some hesitancy due to propaganda against the vaccine.

Meanwhile, the Brazilian, South African and UK variants could quickly plunge the country into a deeper health crisis, he said.

Dr. Ashraf Nizami, a Lahore-based medical expert, said that the government did not do enough to counter the negative media that is attracting the attention of millions on social media. Both Nizami and Shoro believe that rumors about side effects of the vaccines, especially regarding the AstraZeneca inoculation, are contributing to widespread hesitancy.

Muhammad Iqbal Khan Afridi, a parliamentarian from the ruling Tehreek-e-Insaf party, echoed those beliefs. Out of 35 family members, he said he was the only one to get the vaccination so far. Afridi added that influential clerics are also using mosques to spread negative messages about the vaccine.

A number of prominent clerics and personalities, including a famous defense analyst, have voiced vehement opposition to the vaccine, coming up with conspiracy theories and calling on citizens not to get vaccinated.

Such messages are not new in the South Asian country, where clerics and extremists have openly opposed the polio vaccine, keeping Pakistan on the list of just a few nations where the disease still exists. Several attacks against those issuing polio vaccines have also been reported in previous years.

Dr. Abdur Rashid of the Drugs Regulatory Authority of Pakistan believes that the slow rollout is primarily due to a shortage of available vaccines. "Countries all over the world are scrambling to get vaccines. We were lucky to have China provide us with more than 1.5 million. We are trying to get vaccines from wherever we can," Rashid told DW.

On the condition of anonymity, a senior government official also blamed the slow pace on the shortage of vaccines. "We are trying to get as many vaccines as possible and might get 18.7 million doses by June," he told DW.

Sindh province's health minister, Dr. Azra Fazal Pechuho, said that the registration system is also partially to blame for the pace. "The portal launched by the federal government is slow, so people find it difficult to register. However, the Sindh government is asking people to just walk into their nearest vaccine centers if they are of eligible age," Pechuho told DW.

Others, however, contest the claim that the vaccination rate is too slow. Dr. Ikram Ullah Khan, an official from the northwestern city of Peshawar, told DW that around 65,000 out of 75,000 total health care workers have been vaccinated in the city.

The rest would be inoculated soon, he said, adding that the province has already vaccinated more than 450,000 people and plans to give shots to over 10 million people by December this year.

Pechuho believes that the heart-wrenching scenes of relatives and loved ones dying in India have also made a deep impact on people's impression of the vaccine in Pakistan, and have encouraged more people to register.

Vaccine registration on the rise

On May 4, Asad Umar, Pakistan's federal minister of planning, development and special initiatives, announced that more than 164,000 people had been vaccinated in a single day, and around 200,000 people the following day. Additionally, he said, the pace of registration had also picked up.

Meanwhile in Sindh, authorities have launched a center that could be used to vaccinate 30,000 people a day. "We are setting up more such centers and will ask people over the age of 18 to just walk in," Pechuho told DW. "A mobile service is also vaccinating those who are bedridden and people with disabilities."

Additionally, the government of Punjab, Pakistan's most populous province, is setting up new centers to offer the vaccine to around 80,000 people per day.

Rashid believes that Pakistan will solve its vaccination issue. "We are seeking cooperation with China, which has agreed to get vaccines filled and packaged in Pakistan," he said, adding that the Drugs Regulatory Authority is allowing another Chinese company to carry out clinical trials of a different vaccine which would consist of three doses.

"With all of this, we will not have a supply problem and will have enough vaccines to vaccinate all Pakistanis," he said.