You may be at risk of catching the new subvariants BA.4 or BA.5 even if you had the original omicron, virologist Alex Sigal told DW's Science Unscripted.

A small-scale study in South Africa has seen a significant drop in people's immunity to two new subvariants of omicron — even after they had been infected with the "original" omicron variant of the coronavirus. That original infection would normally give people good protection against reinfection, or so is the thought.

First, they got sick with the original omicron, BA.1. Then they had their blood samples intentionally infected with newer omicron subvariants BA.4 and BA.5.

The results of the study have been published as a pre-print, which means they have yet to be peer-reviewed, and they are based on only 39 samples — 24 from unvaccinated people and 15 from people vaccinated with BioNTech-Pfizer or Johnson & Johnson jabs.

But lead researcher Alex Sigal, a professor of virology and head of the Sigal Lab, told DW we could be seeing the start of a new wave of infections.

DW: How could this be a new wave? These variants are all sub-lineages of omicron and most of us have had omicron.

Alex Sigal: We didn't expect it either. We thought the next variant would be something completely different. But the virus keeps making fools of us, showing us new tricks.

The good news is that they're not so different that you would expect no immunity if you had previously had an omicron BA.1 infection, whether you were unvaccinated or vaccinated. It's just that your immunity is much better if you are vaccinated.

Is there anything to suggest the severity of the infection has increased with the new subvariants, BA.4 and BA.5?

They do have this mutation L452R [at the spike protein] and that's shown to make the virus [more infectious] at the cell level. So, perhaps that's kind of an increase in severity. 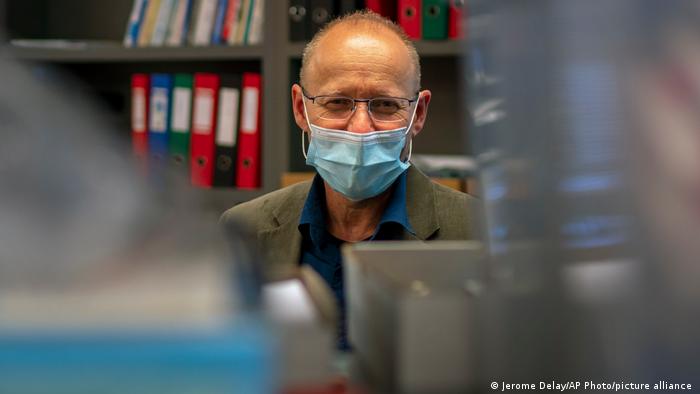 Virologist Alex Sigal says the omicron subvariants BA.4 and BA.5 may spread internationally, but that that is speculation for now

But we're not seeing any signs of that right now. And the reason for that is the pre-existing immunity. The original omicron wave in South Africa was so large. And there's so much other immunity that compensates for any changes that might make the virus more severe. So, I don't expect this to be a very severe wave in South Africa.

On the other hand, places that don't have much immunity and have [low levels of] vaccination, they might be in a bit more trouble. But whatever happens to the virus, our immunity is also evolving and becoming better.

We know that our immunity begins to wane a few months after infection. Is it possible that BA.4 and BA.5 are on the rise because our immunity wanes, anyway ⁠— and not because the subvariants are better at escaping our immunity?

No, they're escaping the previous immunity. There's no doubt about that. Yes, immunity wanes, but the fact is that the subvariants have got these mutations and they are able to escape previous immunity. The antibodies that [were produced by] the original omicron are not recognizing the subvariants as well. That's where a lot of this is coming from.

The other thing is that omicron itself – the original omicron – is not very immunogenic. It doesn't produce a strong immune response. So, reinfection can happen more easily.

So, Alex, once again, like six months ago, you find yourself at the epicenter of what appears to be a new wave. What is your message to people around the world?

First of all, of course, I hope it doesn't go other places. That can happen. The beta variant was a very big infection wave here, but it didn't really happen in other places. Omicron BA.1 started here and did go everywhere. So, hopefully that's not going to happen, but there's a good chance it will.

My message is 'don't be too uptight' but also 'don't be complacent.'

We need to keep our immunity up and the best way of doing that is through vaccination. Even if vaccination doesn't protect you from an infection, it does protect you from what you are infected with and what's coming down the road. So, it's definitely worth doing, getting vaccinated. That's our best tool unless we want to go back to lockdowns. And I don't think anybody wants to do that anymore.

The other thing is, there will be better booster [vaccines]. And with time, we're going to get better at handling this virus. But we should not expect to get rid of it.

Alex Sigal is the head of the Sigal Lab, a joint project of the Africa Health Research Institute in Durban, South Africa and the Max Planck Institute for Infection Biology in Berlin, Germany. He's also a professor at the University of KwaZulu-Natal.

New omicron variants: What we know so far

A new omicron subvariant, BA.2.12.1, is spreading in the US and India. German Health Minister Lauterbach has expressed concern about the highly contagious coronavirus variant. Here's what we know so far.

COVID digest: WHO on alert over new omicron subvariants

The World Health Organization has announced it is monitoring two new subvariants. A politician in Thailand could be jailed for criticizing the monarchy in relation to the country's vaccine campaign. DW has the latest.

Origin of hepatitis outbreak in kids is still unknown

Doctors are puzzled by an unknown strain of hepatitis presenting in children, which has in some cases caused liver failure. But they are learning more. Symptoms are like jaundice.

Listen to Science unscripted on Apple

Listen to Science unscripted on Spotify