COVID: Have we reached the peak of omicron infections? | Science | In-depth reporting on science and technology | DW | 12.01.2022

COVID: Have we reached the peak of omicron infections?

Omicron may infect 60% of the world's population by mid-March. That may mean global infections of 5 million per day. 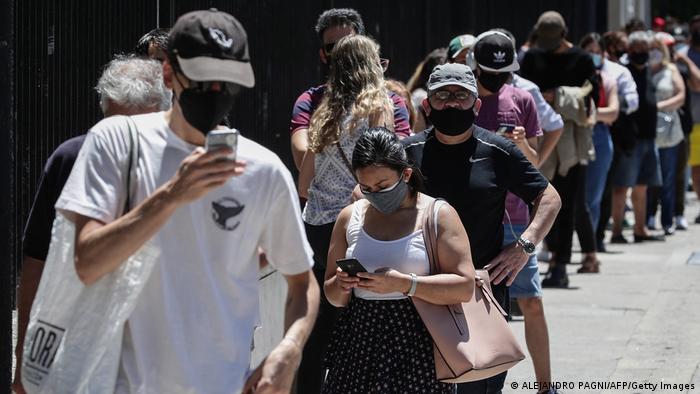 Whether we're at peak infection or not, experts say: Wear a mask, get tested, get vaccinated

The new year started with a doubling of COVID infections.

On Tuesday, the European Regional Director for the World Health Organization (WHO), Hans Kluge, said that the 53 countries in the region had seen over 7 million newly reported cases of COVID-19 in the first week of 2022.

Those figures had more than doubled over a two-week period, Kluge said.

As of January 10, 26 countries in Europe had reported that more than 1% of their population was getting infected with COVID-19 each week.

Projections through to March

The situation is "challenging health systems […] in many countries where Omicron has spread at speed and threatens to overwhelm in many more," said Kluge.

But he said that vaccines were providing good protection against severe disease and death, including for omicron. He said that immunization was preventing many people from needing hospitalization.

Citing hospitalization rates in Denmark, Kluge said there were six times as many unvaccinated COVID patients in hospitals over the Christmas week than COVID patients who were fully vaccinated.

The latest forecasts from the Institute for Health Metrics and Evaluation (IHME) seem to echo Kluge's assessment. The IHME is a population health research organization at the University of Washington School of Medicine, which the WHO references itself.

Daily global cases of coronavirus could reach 5 million, but that could "top out in the month of January," says Murray.

"We expect that by March, omicron will infect 60% of the world's population," Murray says. And "we are seeing a small increase in deaths at the global level because of omicron."

In Europe alone, it is estimated that more than 50% of the region's population could get infected with omicron in the next 6-8 weeks.

London's Regional Director for Public Health, Kevin Fenton, told Sky News in the UK that infection rates in the British capital appeared to have reached their peak at around New Year. He cited figures from the UK's Office for National Statistics (ONS).

However, while those ONS data from January 7 do show a drop in positive COVID-19 tests (on nose and throat swabs), that was only for the British capital, London.

Elsewhere in England, the ONS data show that infection rates continued to rise. And the same goes for the other three nations in the UK — certainly when it comes to the omicron variant of the coronavirus: Rates for omicron were up in England, Wales, Scotland and Northern Ireland. Delta infections were on a downward trend.

Infection rates remained "very, very high," said Fenton, with one in 10 Londoners infected. "We're not yet out of this critical phase of the pandemic, although we may well be passed the peak."

Fenton went on to say that London was not seeing a "rapid reduction" in infection rates yet, and that there was pressure on hospitals in London — largely coming from unvaccinated patients or those whose vaccinations were "incomplete."

An "ice pick" rather than a wave?

In the United States, health officials at the Centers for Disease Control and Prevention (CDC) say they see potential for a speedy drop in omicron infections, but they are saying that with a note of caution.

Speaking at a briefing on January 7, CDC Director Rochelle Walensky said the omicron trend in South Africa, where the variant was first reported in November 2021, had been described as more of an "ice pick than a wave."

Walensky said we could see more of a "precipitous increase, and then a precipitous decline." But, then, said Walensky, the situation in South Africa was different from that in the United States, and that makes a straight comparison difficult.

"They did have a huge proportion of their population with previous disease. We have a larger proportion of our population that is vaccinated and boosted. So, there are reasons to think that they may act similarly and reasons to think they may act differently," Walensky said. "I do think in places that we are seeing this really steep incline that we may well see a precipitous decline, but we're also a much bigger country than South Africa."

It would appear, then, that when and/or whether a country — or a region — has reached its peak infection for omicron is too hard to say for now.

The IHME estimates global COVID-19 deaths of 6.4 million by May 1, 2022 — even with high rates of vaccination and up to 80% mask use. But bear in mind that this is a global projection and that situations will vary from country to country, region to region, and from community to community.

What do we do now?

That means you may never know you were or had been infected.

But if you're unvaccinated or have never had a COVID infection, you are at a higher risk than others to get seriously ill, Murray says.

So, what do we do now, while we wait for this omicron wave or "ice pick" to peak and fall? Murray offers three short answers: Wear masks, get vaccinated, and get tested.