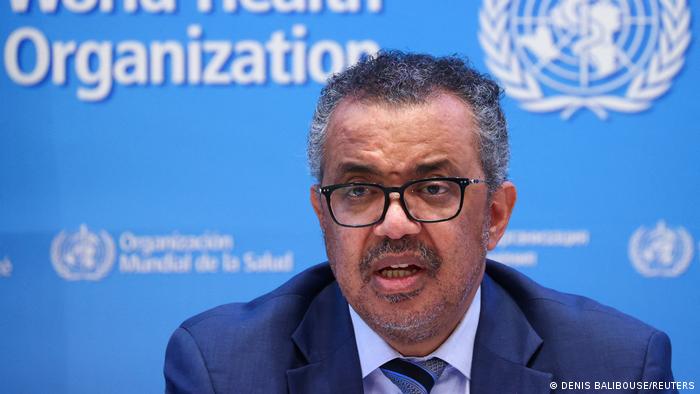 Germany, Norway, Sweden, Kuwait, Saudi Arabia and Canada are among countries that paid their dues in 2021

The World Health Organization on Wednesday asked wealthy countries to pay their fair share of money to fight COVID-19.

Tedros Adhanom Ghebreyesus, director of the WHO, said if countries paid their due share, they can "support low- and middle-income countries to overcome low vaccination levels, weak testing, and medicine shortages."

"Science gave us the tools to fight COVID-19; if they are shared globally in solidarity, we can end COVID-19 as a global health emergency this year," he said.

The WHO, along with other partners, established an Access to COVID-19 Tools (ACT) Accelerator, to pool resources to fight the global pandemic in 2020.

ACT-Accelerator budgeted $23.4 billion (€20 billion) for its efforts from October 2021 to September 2022. However, only $814 million has been raised so far, leaders of the initiative told reporters.

The WHO hoped rich countries would contribute to the fund in the form of grants. But given the urgency of the current situation and the possibility of other variants, its asked them to pay around $16 billion to "close the immediate financing gap." The rest would be funded by middle-income countries themselves.

The ACT-Accelerator hub also encompasses the COVAX initiative which aims at equitable distribution of vaccines, especially to lower- and middle-income countries. COVAX delivered its 1 billionth dose in a shipment to Rwanda in the middle of January.

Just 0.4% of the 4.7 billion COVID tests administered globally during the pandemic have been used in low-income countries. Only 10% of people in those nations have received at least one vaccine dose.

The WHO has set a goal of vaccinating 70% of the world's population by the middle of the year.

Hong Kong's hospital authority on Wednesday said an older man, whose preliminary test results detected COVID-19, died on Tuesday. This may be the city's first death potentially linked with the virus in five months, though authorities will conduct further tests, as goes the rule with preliminary results, to affirm the cause of his death. He was 73 years old and was chronically ill.

Hong Kong has recorded more than 2,600 cases over the past two weeks compared with just two cases in December.

COVID-19: Hong Kong goes back into a strict lockdown

South Korea on Wednesday said it was dropping its vaunted "trace, test and treat" program after hitting a record high of 49,567 cases on Tuesday. Authorities said resources were stretched thin by a surge in infections, with the country crossing more than one million cases over the weekend because of the rapid spread of the omicron variant. Health authorities expect cases numbers to rise to 70,000 a day later this month.

Japan on Wednesday decided to extend its COVID-19 quasi-state of emergency  in Tokyo and 12 prefectures until March 6, the Japan Broadcasting Corporation (NHK) reported. The average number of daily infections has been hitting record highs, with 94,136 infections Wednesday.

"Provided the current encouraging trends in the data continue, it is my expectation that we will be able to end the last remaining domestic restrictions, including the legal requirement to self-isolate if you test positive, a full month early," he told parliament.

People in England with COVID-19 will no longer be legally required to self-isolate from late February.

He said it is part of a move for the UK to learn living with the coronavirus.

Spain's King Felipe tested positive for COVID-19 and will remain isolated for seven days. The palace said he was in good health and would keep up with his work.

Queen Letizia and their daughter Princess Sofia showed no symptoms.

Denmark’s Queen Margrethe II also tested positive for coronavirus. The 81-year-old monarch was showing mild symptoms. She was isolating at the Amalienborg Palace in Copenhagen.

Sweden on Wednesday became the latest European nation to lift most pandemic restrictions. Limitations on the number of people who could gather in restaurants, pubs, and other venues have been done away with, and people can go to work. Additionally, it lifted a travel ban, allowing people from other Nordic countries to visit it.

"Looking ahead, infection rates will remain high for a while longer, but as far as we can judge, the worst consequences of the contagion are now behind us," Swedish Prime Minister Magdalena Andersson told a news conference last week.

The Czech Republic moved closer to scrapping some of its own tighter COVID rules on Wedneday, doing away with a requirement for people to submit vaccination certifications at restaurants, cultural and sports events. However, Czechs are going to have to keep wearing their masks indoors and the number of people allowed to gather at big events would still be limited.

Germany's infection rate continues to rise, with 234,250 new cases and 272 deaths Wednesday, according to data from the Robert Koch Institute. Gerald Gass, the president of the German Hospital Association (DKG), told Bild newspaper that German health systems will be able to handle the situation in coming weeks because COVID rules and restrictions played a major role in bringing the looming crisis under control. He urged that the rules be followed until omicron cases hit a peak, which the federal government expects to be around one or two weeks from this week.

Truckers paralyzing the Canadian capital in protest against COVID rules showed no signs of backing down Tuesday, as several of the nation's provinces either announced or signaled plans to ease measures. In Ottawa, Prime Minister Justin Trudeau, who a day earlier issued a stern warning saying protests "had to stop" appeared to shift tone as well. He said he understood how "frustrated everyone is" and "that time is coming when we will be able to relax."

Several Democratic-run US states, like California and Delaware, announced plans to lift mask mandates in indoor places and schools, as COVID cases slow in America. The state of New York, the early epicenter of America's outbreak in 2020, announced it would lift indoor mask madate as of Thursday, but the governor added that masks would continue to be required in schools.

Palestinian authorities have ramped up COVID-19 testing and vaccinations in the occupied West Bank and Gaza Strip after registering more than 64,000 active cases on Wednesday.

"Three weeks ago we were recording up to 300 infections daily, but in the last few days we crossed the 11,000 mark," said Mahdi Rashed, director of health services in Ramallah.

"It's clear this is a result of the Omicron variant spreading."

He said the real number of infections is likely to be much higher as people are showing "recklessness and indifference" by not adhering to health safety rules.

The head of the World Health Organization says rich countries are merely prolonging the pandemic by fueling vaccine inequality. "No country can boost its way out of the pandemic," he says.