The global scheme has supplied vaccines against the coronavirus to 144 countries since February 2021. But vaccine inequity remains high, with 40% of the world population yet to receive a single jab. 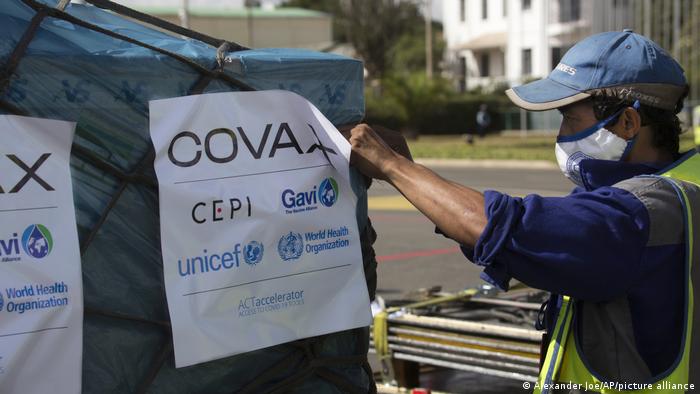 All countries can order doses through the COVAX scheme, but low-income nations receive the jabs for free

The UN-led COVAX scheme has delivered one billion doses of COVID-19 vaccines, one of the organizations that manage the program announced on Saturday.

The COVAX program was set up in 2020 to ensure global access to coronavirus vaccines, particularly to poorer countries.

The program is backed by the World Health Organization (WHO), the Gavi vaccine alliance, and the Coalition for Epidemic Preparedness Innovations (CEPI).

"COVAX has delivered its first billionth dose of Covid-19 vaccines to 144 countries & territories across the world," Gavi chief executive Seth Berkley tweeted. "It's a key milestone in the largest and most rapid global vaccine rollout in history."

The plane carrying the shipment with the one billionth dose arrived in Kigali, Rwanda Saturday evening, Berkley said.

"I felt proud but also humbled knowing how far we have to go to protect everyone and solve vaccine inequity," he tweeted.

It has since supplied 144 countries and has received more than $10 billion (€880 million) in donations.

This was because they were forced to compete with wealthier states buying shots from vaccine makers at a premium and hoarding them. Many countries even placed export restrictions on vaccines.

But shipments have exponentially increased in the last quarter, Gavi said.

Vaccine justice – why is it so important?

However, the program has fallen far short of its initial plan of delivering two billion doses by the end of 2021.

COVAX's plan was also to only supply jabs procured directly by the program using the donors' funds. But of the one billion doses, about one-third have been donated by rich nations.

This change in strategy led to delays as some donors asked for the shots to be sent to countries picked by them.

Despite the one billion milestone, a vast majority of the population in poorer countries remain unvaccinated.

About 67% of the population in wealthy countries have been vaccinated compared with only 5% in poorer nations, according to WHO data.

More than 40% of the world population has not received a single dose.

WHO chief Tedros Adhanom Ghebreyesus on Thursday pointed out that more than 85% of people in Africa have yet to receive a single dose.

'We need to better understand the impact of omicron'

The European Union has exported more than 1 billion coronavirus vaccines, making the bloc the biggest vaccine exporter in the world. Almost 90 million jabs have been delivered to the WHO's COVAX scheme.