COVID: Bangladesh′s textile industry hit hard by pandemic | Asia | An in-depth look at news from across the continent | DW | 12.02.2021 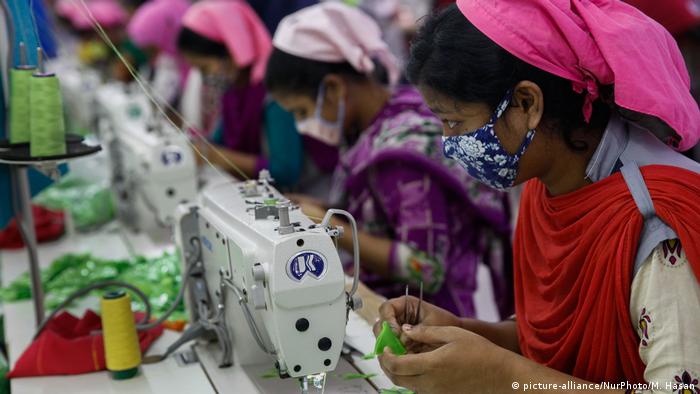 The EU is the top importer of garments from Bangladesh

In 2020, textile exports from the South Asian nation dropped by nearly 17%. Shipments to Europe, which is the destination for 60% of Bangladesh's garment exports, recorded a significant decline of just under 19%.

There hasn't been any uptick in demand and exports so far this year, the Bangladesh Garment Manufacturers and Exporters Association (BGMEA) said.

"Based on current scenarios and the global trade or economic outlook, retail sales trends in the West, and the slowdown in order situation by our customers, it appears that exports may continue suffering till the third quarter of this year."

Bangladesh is hugely dependent on the export of textiles for its national income as the industry accounts for more than 80% of overall exports.

About 4 million workers are employed by the garment industry, most of them female seamstresses who often support several family members and live from paycheck to paycheck.

Many clothing retailers have seen their stocks pile up over the past year.

According to the US-based business consultancy McKinsey, the value of unsold clothing in stores and warehouses worldwide ranges from $168-192 billion (€140-160 billion), which is more than double the level seen before the pandemic.

Swedish firm H&M said a drop in demand worldwide will "inevitably" have an impact on their purchases.

"Our purchasing strategy is long-term but considering the uncertainties with how the pandemic will develop, we are of course closely evaluating the situation," H&M told DW in an emailed reply.

"A drop in customer demand and temporarily closed stores inevitably have an impact on our purchases."

The retailer also said that it is keen to work closely with suppliers to find solutions to support garment workers.

"That's why we have joined the ILO global call to action where we are working together with the ILO and trade unions to establish social protection systems, which the pandemic has highlighted the need for in many countries around the world," the company said.

"Until mid-January, 24% of our existing orders were postponed," Arshad Jamal Dipu, a vice-president of BGMEA, told DW. "We will get the whole picture in April-May. We fear a 30% order loss."

The European Union is Bangladesh's biggest garment export market, while the US is the largest single-country market.

With the increasing spread of new variants of the virus, BGMEA fears the economic recovery will be delayed further as countries tighten restrictions on business and public movement to combat their spread.

"We are observing a 'go slow' approach by buyers since the end of last year, which appears to be taking a further drastic turn," BGMEA president Rubana Huq told DW. "We are not getting pleasant signals from the local liaison offices of the buyers."