COVID-19: Ireland struggles to overcome its Christmas hangover | Europe| News and current affairs from around the continent | DW | 21.01.2021

The country was a model for using shutdowns to keep the pandemic under control — but Ireland is now also a case study for how temporary relaxations can cause devastating problems. Gavan Reilly reports from Dublin. 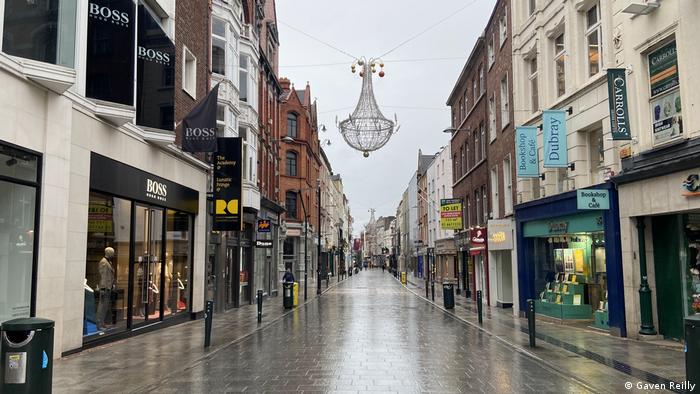 Even Grafton Street, one of Dublin's main shopping streets, is almost deserted in Ireland's third lockdown

"It wasn't worth it," says the solitary pedestrian on a drizzly Dublin morning. "What was the point of Christmas if it means we're all locked up again for months?"

The pedestrian is the only person DW meets during a 10-minute stroll around one of Dublin's main shopping districts and asks not to be named, having walked beyond the legal limit of 5 kilometers (3 miles) for permitted daily exercise during Ireland's third shutdown. That in itself is a useful illustration of Ireland's COVID-19 problem: When granted freedoms, Ireland pushes them to the limits, with devastating national consequences. 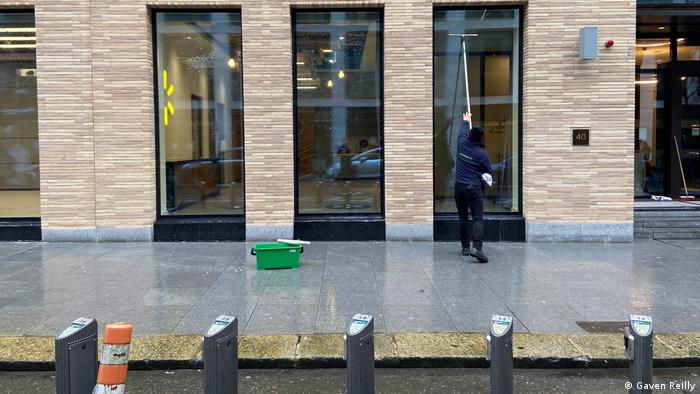 Most city center office blocks, like this one in Dublin's Molesworth Street, are deserted under a work-from-home directive

Ireland was the first European country to enter a full second national shutdown, aimed at keeping October's second wave from overwhelming its health system. On that front, it worked: By late November Ireland's incidence rate was the second-lowest in Europe, and the public was told that they had earned a "meaningful" Christmas. Restaurants and food-serving pubs could reopen from December 1, while nationwide bans on household visits and long-distance travel were relaxed on December 18.

"In hindsight, knowing what we know now, would we have done what we did a month ago?" premier Micheal Martin asked himself in a TV interview last week. "Obviously not."

In just five weeks, Ireland went from having the second-lowest rate in Europe to the highest in the world. At the peak, one in 65 people nationwide were COVID-positive, though the true number may have been even higher: An extraordinary demand for tests meant only those showing symptoms were granted one. As cases pile up, so do fatalities. More Irish people are dying now from COVID-19 than at any point previously. 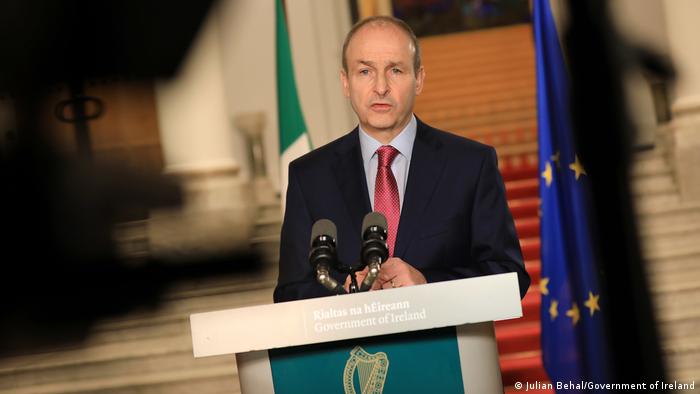 The third lockdown is tinged with anger over the government's decisions when it ended the second. Its scientific advisers told the government not to allow visits between households and the reopening of the hospitality sector at the same time. Yet both were permitted in the week before Christmas, with groups of six (from six households) allowed to meet in pubs for 17 days beforehand. Politicians called for only modest socialization but set policies that allowed a catastrophic resurgence of COVID-19. Now lockdown is back: Even schools are shut, and Dublin's streets are deserted once more.

The health system spared in November is buckling in January. COVID-19 is simultaneously forcing more and more hospital staff out of work, while also claiming two-thirds of Ireland's intensive care beds and nearly one-fifth of its entire hospital capacity. All non-urgent care is cancelled so that operating theaters can be repurposed for critical care. 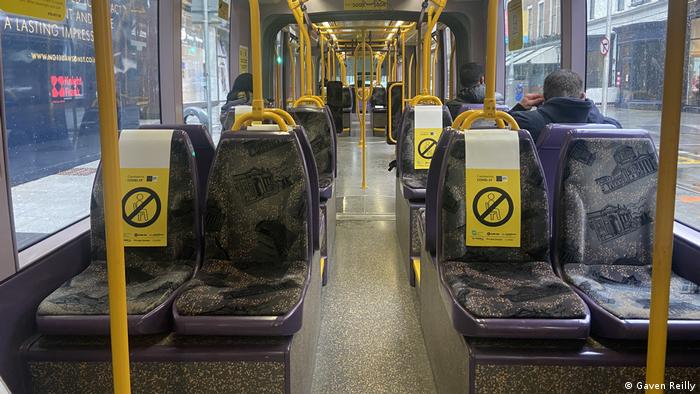 Public transport is available only to 'essential workers' amid the lockdown, leaving many trams almost empty

Anthony O'Connor, a consultant gastroenterologist at Dublin's Tallaght Hospital, says there are knock-on effects for all forms of health care. "There are patients who can't get into hospital for their treatments, who can't get a bed; patients who can't get in for an appointment when you need them," he tells DW. "These patients now have restricted access to health care for a year, and the signs of that are starting to show. A lot of these patients are getting in touch with us, asking us to help them. A lot of the time there isn't anything we can do."

Also at fault is Ireland's casual approach to overseas travel. The scientific advisers have sought mandatory quarantine for international arrivals since last June, but the government prefers a model where incomers provide a contact address and then merely "restrict movements." This allowed London-based emigrants returning for Christmas to import the faster-spreading British variant, which already accounts for half of all Irish cases. Its presence means that Ireland is in an even more dangerous position: If restrictions are ignored or relaxed, the virus will spread even more quickly.

The government's official position is that COVID-19 can be neither embraced nor eradicated, and so Ireland must simply live alongside it. But it will be September before all adults get a vaccine, and there is increasing support for the idea of exploiting Ireland's island status and enforcing an aggressive "zero COVID" clampdown to extinguish the virus. 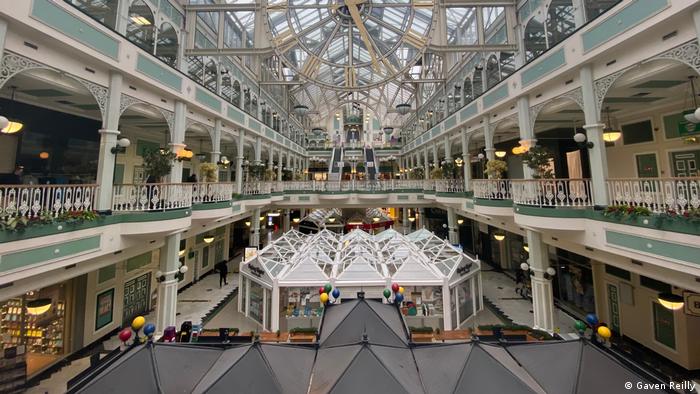 This would require coordination with Northern Ireland, where Unionist politicians have blocked any restrictions on travel to Britain. But independent scientists believe the COVID-19 cycle can be broken only if political taboos are tackled.

"This is a difficult problem but there's no excuse for not trying," says Aoife McLysaght, a genetics professor at Trinity College Dublin. "If the politicians were trying, and it didn't work, they could see what wasn't working. But not trying to at all? It wears quite thin with me."

COVID-19: Who pays when the politicians get it wrong?

COVID-19: Who pays when the politicians get it wrong?

Around 100,000 animals could be slaughtered over concerns mink could pass COVID-19 on to humans. Elsewhere, Swedish mink farm workers have tested positive for the virus, prompting authorities to conduct a review.

Prime Minister Boris Johnson says Britain's lockdown could last until the end of March in some places. His comments came as the country recorded more than 60,000 cases and over 1,000 deaths. Stay up to date with DW.