COVID-19 in Philippines: Police deployed to implement fresh lockdowns | Asia | An in-depth look at news from across the continent | DW | 20.07.2020

As cases continue to rise, the government has ordered police to accompany medics and transfer any infected patients to isolation facilities. Citizens have also been encouraged to report any infected neighbors in hiding. 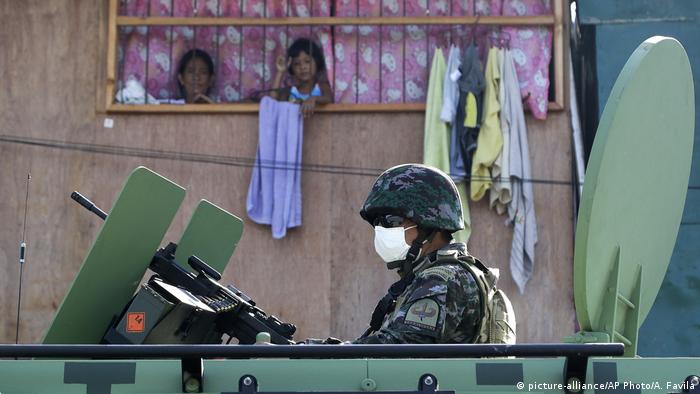 The Philippines on Monday confirmed 1,521 new coronavirus cases and four new deaths, its fifth straight day of reporting over a thousand infections. The Health Ministry said total deaths have increased to 1,835, while confirmed cases have reached 69,898.

Rabindra Abeyasinghe, the World Health Organization's (WHO) representative to the Philippines, called the trend "worrying" and urged the government to improve its contact tracing methods.

President Rodrigo Duterte's administration imposed one of the world's longest and strictest lockdowns in March, but fresh outbreaks of the virus have forced some local officials to put their cities under lockdown once more while the government announced it would impose a series of stringent measures.

Eduardo Ano, an ex-general and one of the officials heading the country's COVID-19 response task force, said authorities will deploy police to escort healthcare workers during their door-to-door visits and transfer any COVID-19 positive patients to isolation facilities. "We don't want those whose houses are not equipped for isolation to quarantine at home," said Ano at a press briefing.

Ano also encouraged people to report neighbors who are COVID-19 positive but in hiding, citing a Philippine law that mandates the reporting of coronavirus cases to health authorities and penalizes non-compliance with imprisonment. 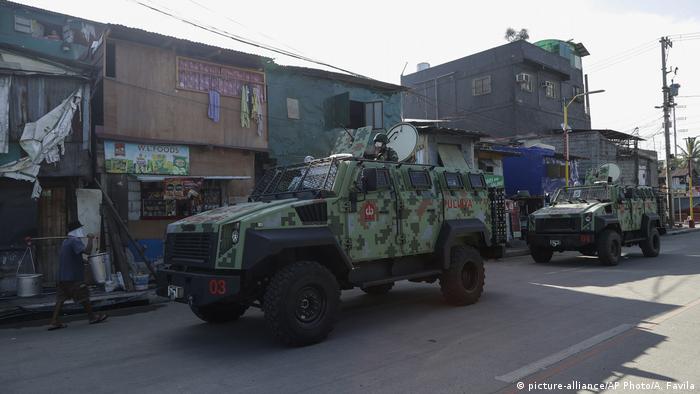 "The goal is to reduce the risk of community transmission. We do this by making sure that confirmed cases are isolated and are not in contact with anyone else in the community," Health Undersecretary Maria Rosario Vergeire told local media, adding that the move was consistent with existing public health protocols. But the announcement wasn't without its criticism.

"I really think it would be better if the home visits were led by community health workers. Involving the police increases the stigma associated with COVID-19 and will just cause panic in the community at a time when the increasing number of cases is already making everyone anxious," Andrei dela Cruz, a NGO health worker based in Navotas, about 14 kilometers (8.7 miles) north of the capital Manila, told DW.

Echoing similar methods used during Duterte's war on drugs, the new measure triggered a wave of fear across the country.

For some, the door-to-door visits are a flashback of tactics used by police during "Project Tokhang," the state crackdown on illegal drugs. Tokhang is a combination of two words that mean "knock" and "plead." Police would knock on the doors of suspected drug users, asking them to quit and turn to rehabilitation instead.

"It's [door-to-door police accompaniment] like Tokhang but for COVID. This may actually discourage more people from reporting their status," opposition senator Risa Hontiveros said in a statement.

Presidential spokesperson Harry Roque rejected criticism and called it a move by opponents to "use the important strategy of contact tracing to vilify the current government."

In Navotas, residents are only authorized to leave home for essential activities. The city went into a two-week lockdown on July 16. 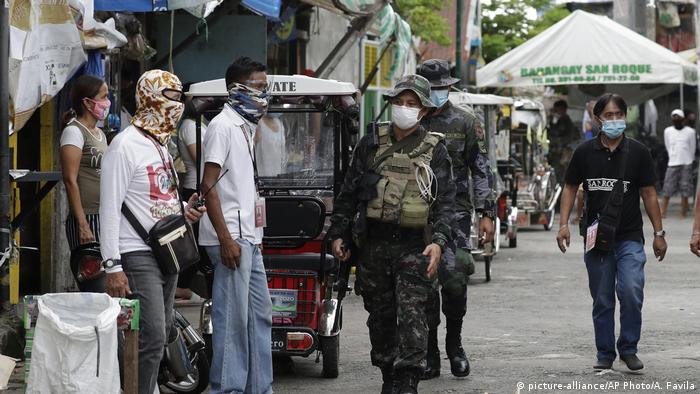 For some, the door-to-door visits are a flashback of tactics used by police during the controversial war on drugs

Some residents, including Josie, welcomed the presence of police in enforcing safety measures such as home isolation and the wearing of face masks.

"If it's just the village captain who is going to issue warnings, he is less likely to be taken seriously because everyone knows him already. Some may use this familiarity to talk their way out of complying," said the 32-year-old homemaker.

Josie's neighborhood was one of many affected by Duterte's war on drugs. A number of Navotas residents were killed at the hands of police during anti-drug operations as authorities tried to bust operations or track down vigilantes.

Josie, acknowledging the past, is not swayed. "I would rather have the increased police presence to keep people in check than get infected by the virus," she said.

Government officials say the parliamentary committee's decision to reject the news network's license has nothing to do with President Rodrigo Duterte's staunch criticism of ABS-CBN. But activists find it hard to accept. (10.07.2020)

The Philippine government's move to shut the nation's largest broadcaster is the latest affront to press freedom that has left millions of Filipinos cut off from access to vital information in the middle of a pandemic. (06.05.2020)

New anti-terrorism legislation will give greater powers to authorities to arrest people without a warrant and carry out surveillance. Activists say the law is aimed at intimidating dissidents. Ana P. Santos reports. (08.06.2020)

President Rodrigo Duterte treats all problems like nails because he has only one tool in his box: a hammer. But he still has a number of Filipinos on his side, DW's Rodion Ebbighausen writes. (10.07.2020)

Millions of children across the Philippines have attended their first in-person lessons since the pandemic began. Education officials are concerned that illiteracy rates have worsened because of school closures.