COVID-19 causes 'bike explosion' as Germans long for a ride

As COVID-19 discourages the use of buses and subways, thousands of Germans are flocking to one of the most basic forms of mobility: the bicycle. But dealers and producers are finding it hard to ride the boom. 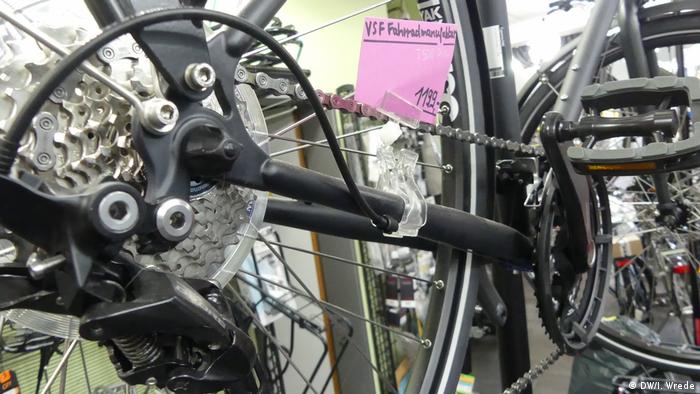 At the Drahtesel bike store in Bonn, Germany, cycling enthusiasts can find everything their heart is longing for. The store is tightly packed with the latest models and shelves are brimming with biking gear and equipment.

What's missing though is time that the owner, of Jean Franzen, can devote to his customers. A steadily growing number of clients at his store these days has forced Franzen to shorten the time spent advising each of his customers.

After lockdown measures in the small Rhineland town were eased in April, and Drahtesel was allowed to reopen, social-distancing guidelines caused long lines in front of the store. Now the lines are getting even longer as anxiety about using public transport, less traffic and people's wish to exercise after staying at home for weeks drive a bicycle boom in Germany not seen in decades. 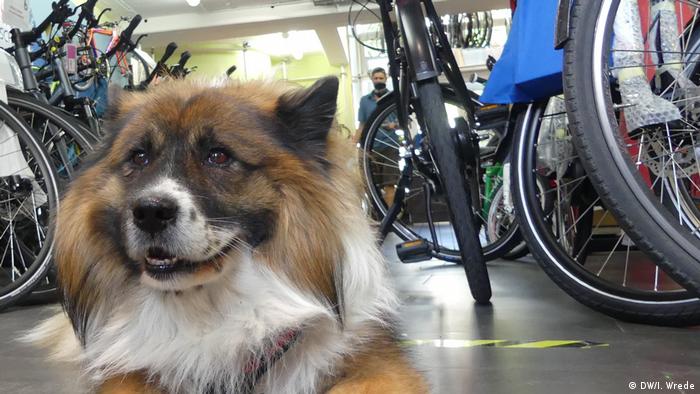 The bike trade in Germany has been flourishing for quite a while with sales rising 34% to €4.2 billion in 2019. But demand virtually spiked in April and May, causing waiting lists especially for customized bicycles to soar.

"Business was brisk in the month of April and May, as bike sales grew significantly," says Dietmar Knust, the chairman of the German Association of Bicycle Traders. Some stores sold three times as many bicycles as normal in the two months, he told DW.

And yet, store owner Jean Franzen could be selling even more, he says, if it wasn't for a widening shortage of new bicycles hitting the red-hot German market and limiting further growth.

"We're not getting many of this year's models anymore because they are simply sold out at the manufacturers," he says, adding that the supply bottleneck has already widened to spare parts such as bike locks, saddles and tires. "Those parts we would normally get within three to four days, but now they are not available at all."

Bicycle maker Stevens in Hamburg, Germany, confirms manufacturers are currently experiencing a complete sellout of their products. Volker Dohrmann, head of product marketing and strategy at Stevens, says the jump in demand since April has all but emptied out warehouses storing current 2020 models.

"We're experiencing a dry spell at the moment, probably lasting until the fall when the new 2021 models will arrive," Dohrmann told DW.

The marketing specialist has been with Stevens since the founding of the company in 1990, and describes sales in the month of May as the best he's seen over the past 20 to 30 years. "I’ve also heard this from other bicycle makers in other countries, for example in the US, the Benelux countries and in England," he adds. 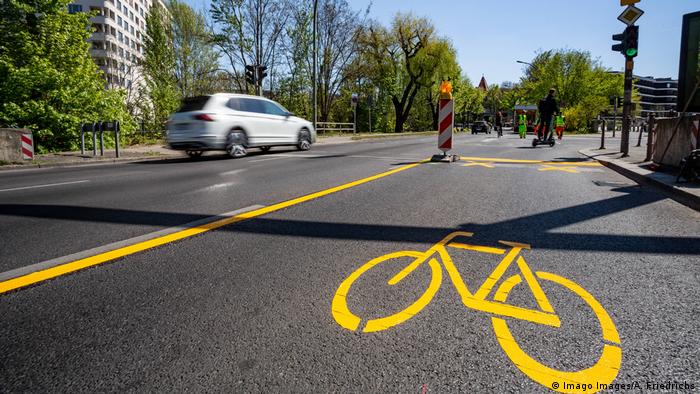 Lockdown measures imposed to slow the spread of COVID-19 forced many Germans to stay at home. City planners used the time to set up so-called pop-up bicycle lanes that are now coming in handy with cyclists

But the rise in demand doesn't necessarily translate into higher profits for both the manufacturers and the sellers.

The present supply bottlenecks are also partly caused by a new cycling trend that has emerged in recent years and has turned the conventional boneshaker into a high-end luxury vehicle: the electric bicycle.

One-third of all bicycles sold in Germany are battery-assisted, and their production is much more complex, says Dohrmann.

"E-bike frames need to integrate the battery, as well as the electric wiring and fittings for the motor. That is why making them is double or even three times as complex as producing a frame for a normal bicycle," he explains. It is only logical, he adds, that increasing complexity lowers manufacturing output and speed, hitting supply especially in times of surging demand.

Surprisingly, the coronavirus pandemic has had only few repercussions on bike maker Stevens, as the company was able to continue production throughout the lockdown in Germany that didn't include factories.

"The stockpiles at our suppliers lasted for four to six weeks, so, we had enough parts to tide us over the [lockdown] period," says Dohrman, adding that the company's Chinese suppliers were also lucky enough to escape sweeping factory closures in the Asian country in February. 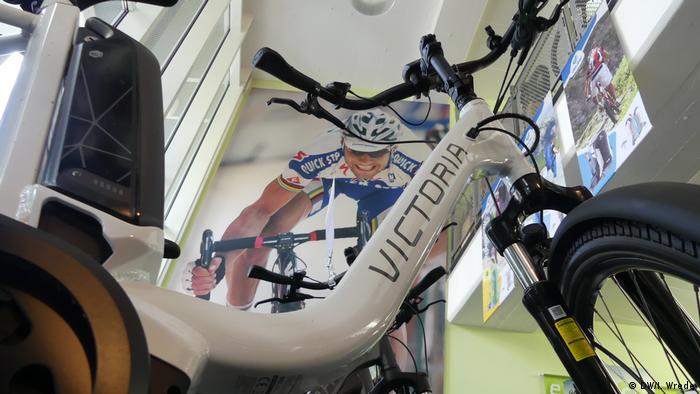 Sales of electric bicycles are growing strongly in Germany, as battery-assisted bikes provide a new experience of mobility especially for the country's aging population

Another German bicycle maker, Diamand, was less fortunate, as the company was forced to furlough some of its 500 staff at its factory in Hartmannsdorf, Saxony. "We've been negatively affected by supply-chain disruptions in Asia," Diamand manager Thomas Eichentopf told DW, adding that production had fully resumed now and workers had returned from the German state-funded wage compensation scheme.

According to industry consultancy group Human Powered Solutions (hps), disrupted supplies due to the COVID-19 crisis have affected bike dealers in the United States the most. Since the country no longer has a manufacturing base for bicycles, some 90% of all bikes are imported from China, says hps analyst Jay Townley.

But apart from supply disruptions, the US bike trade also had to digest a 25% import tariff recently imposed by the Trump administration on bikes from China. Nevertheless, sales in the US in April and May were the highest since the oil crisis of the 1970s, Townley told DW.

Not a new problem

Problems with supply are not entirely new to German sellers, says Jean Franzen. "The bikes that we are getting now were ordered back in August last year. They were intended for 'immediate delivery' but have only just arrived."

Franzen thinks the current difficulties have also been aggravated by a globalized bicycle trade for which it only takes a sudden shift in demand, like the one caused by COVID-19, to be fundamentally disrupted. 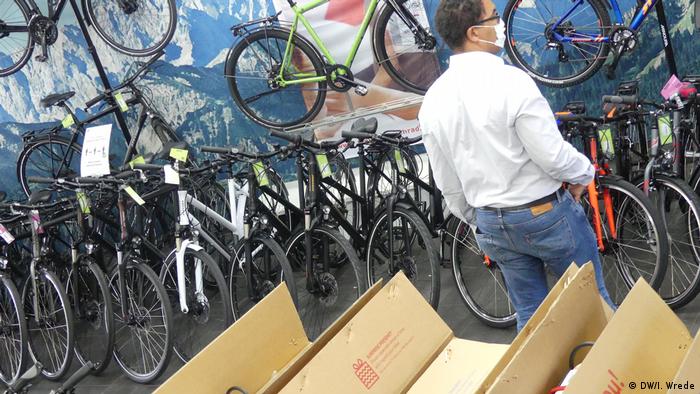 Sellers normally order their bikes in the previous year, usually on the sidelines of the Eurobike trade fair in September, where the newest models are displayed. Manufacturers then tailor their annual production output in line with demand.

"It just so happens that certain bikes are already sold out in February and March even during a normal year," says Franzen, and laments that there are simply too many new models launched every year, making it virtually impossible to stockpile each of them in sizable numbers. "We are relying on manufacturers being able to manage follow-on orders if there is a heightened demand for a bike."

In the current pandemic, bicycles are selling like hot cakes, no matter which model. Franzen believes though, growth will start to level off in the fall, with demand beginning to normalize. 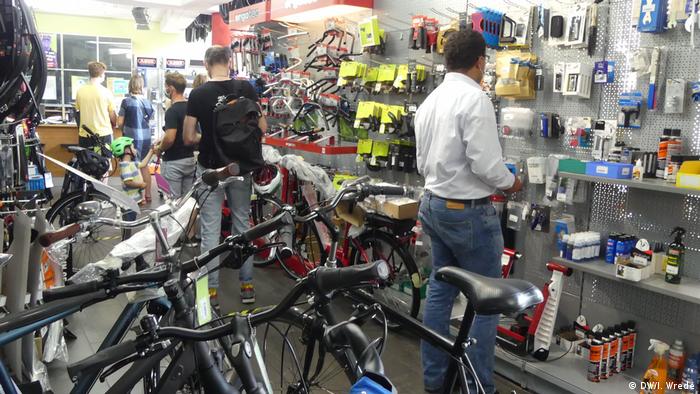 Footfall at the Drahtesel bike store in Bonn, Germany, is still heavy. But will Germans switch to cycling for longer?

Manufacturer Stevens, naturally, has different hopes, and is planning to expand production in 2021. But its marketing expert Volker Dohrmann says the plan is contingent on whether the company's suppliers will be able to handle the additional demand for bike parts and boost their production output over the next six months. If not, the bike boom is likely to stall despite the higher demand.