Police imposed strict conditions on a march by a far-right party contesting the EU elections, amid concerns over anti-Semitism. Counterprotesters outnumbered participants in the extremist political group's rally. 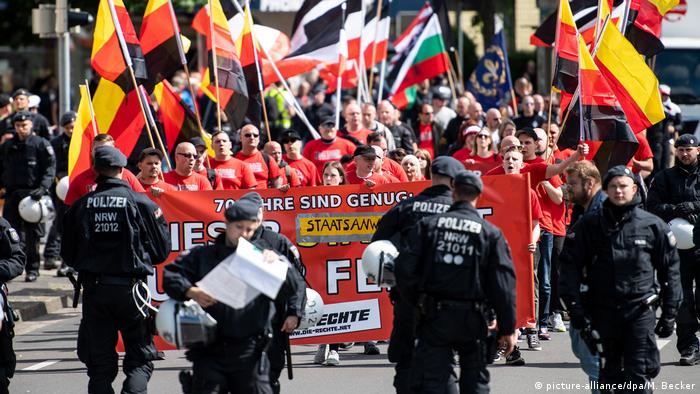 A rally by "Die Rechte" (The Right) in the western German city of Dortmund was met with a counterprotest on Saturday, as people took to the streets to voice their disdain with the far-right party.

At least 600 counter-protesters turned out against some 180 far-right sympathizers in the city's Hörde district, where police were deployed to keep the groups apart.

Opposition to the far-right rally — ahead of European elections in Germany on Sunday — was organized by trade unions, political parties, churches, education establishments and community groups.

"Today Dortmund is flying the flag against the right and is standing up with a broad alliance against the Nazi demonstration," read a tweet from the Dortmund Police.

Die Rechte is standing in EU elections across Germany and has Ursula Haverbeck — jailed for Holocaust denial and dubbed "Nazi Grandma" by the German media — as its lead candidate.

The far-right party had earlier been ordered to remove election posters deemed to carry anti-Semitic slogans from along the route of the march. Display of the posters was banned on Friday by a regional court in the city of Münster, after a ruling that the placards "created the impression of a threat, in particular to the Jewish population living in Germany."

Among the slogans,  a press release from the city police said, was one saying: "We don't just hang placards."

Die Rechte sympathizers were also banned from carrying banners bearing the slogans, or for chanting the offending words out loud.

Read more: How neo-Nazis bring up their children

Dortmund city authorities took the clearing of the placards into their own hands on Saturday morning, after the Die Rechte failed to respond to a police order to remove them. Officials said the group would be invoiced for the dismantling of election posters in 19 locations around the route.

Federal and local police were on hand to oversee the demonstrations, and to monitor the movements of protesters arriving at local train stations.

In the German state of Saxony, neo-Nazi election poster displays were removed in the cities of Zittau and Chemnitz. Germany Constitutional Court in Karlsruhe had rejected appeals against the removal of the displays by two parties, the neo-Nazi National Democratic Party of Germany (NPD) and the "Dritte Weg” (Third Way).

Hundreds of neo-Nazis marched with torches, flags and drums through the eastern German town of Plauen this week. The incident has put authorities in the state of Saxony back on the defensive. (03.05.2019)