From Big Oil to Big Tech, major companies are promising to go net zero and wash away their carbon sins. But critics say the corporate climate pledges are a smokescreen. Campaigners call for an end to the burning of fossil fuels

In the aftermath of the United Nations climate conference that ended with muted hope and loud frustration when the language to end coal power was weakened at the last minute, a post-mortem on the fossil fuel lobby's impact in Glasgow is underway.

Though coal rated a mention for the first time in a COP agreement, oil and gas — the other major sources of carbon emissions that fuel global heating — were not referenced in the Glasgow Climate Pact. Furthermore, none of the high emitters among the G20 countries signed up to the Beyond Oil and Gas Alliance to end the use of these fossil fuels.

Climate campaigners have argued that big polluters were able to wield their influence in Glasgow by pushing net zero emission targets that rely on unproven carbon capture technology and offsetting mechanisms. The idea is to delay immediate fossil fuel emissions cuts and avoid "real zero," they said.

Shell, BP and Microsoft are among the big companies that have pledged to go net zero by mid-century.

"Big oil and gas have all signed up to net zero by 2050, which allows them to pretend they are actively engaged in tackling climate change rather than making the problem worse," said Pascoe Sabido, a researcher at Brussels-based lobbying watchdog Corporate Europe Observatory (CEO), and co-author of  the report "Still a Big Con: How Big Polluters are using 'net zero' to block meaningful action at COP26."

Fossil fuel giant Shell is one of the world's biggest polluters and was ordered by a Dutch court in May 2021 to slash its emissions by 2030 in order to meet the Paris Agreement target of limiting global heating to 1.5 degree Celsius (2.7 Fahrenheit) by the end of the century. Yet the company has been promising "net zero by 2050" through a series of decarbonization initiatives that campaigners said amount to greenwashing.

According to the "Still a Big Con" report released in the lead-up to Glasgow, oil majors Shell and BP together devoted $17 billion (€15 billion) to fossil fuel projects in 2021, but said the investment is consistent with their 2050 net zero commitments.

Both were represented at COP26 as members of the  taskforce on scaling voluntary carbon markets, which was at the summit to promote carbon offsetting as a route to net zero.

Carbon market offsetting is essential to many 2050 net zero targets because it allows polluters to cancel out emissions by purchasing carbon credits generated through tree planting, for example. By contrast, campaigners are demanding real zero, meaning direct cuts at the source of fossil fuel emissions.

Capturing CO2 from the sky

The 'race to zero'

Some 503 delegates from over 100 fossil fuel companies attended the COP, which in total is larger than any country delegation, according to reporting by climate watchdogs like Global Witness. The "Still a Big Con" report argues that many corporations with fossil fuel ties were represented at the COP as signatories to pledges like Race to Zero, an initiative of the United Nations Framework Convention on Climate Change (UNFCCC).

The pledge is rallying non-state actors to halve emissions by 2030, and ultimately to reach net zero by 2050 at the latest. Fiona Macklin, campaign coordinator for Race to Zero, said it will enforce these non-binding goals through "robust minimum criteria" that ensure members "are not kicking the can down the road."

BlackRock, a leading financial firm and the world'ssecond largest coal investor, is among the thousands of businesses and financial institutions signed up to Race to Zero. Software giant Microsoft, which Sabido called "the biggest tech partner to the oil and gas industry," is also on the list.

Another Race to Zero member is the Drax Group. The former fossil fuel company turned clean energy business promises to be carbon negative by 2030 yet runs the highest carbon-emitting power plant in the UK, and the fourth largest in Europe, according to UK-based climate think tank Ember.

The plant switched from burning coal to wood five years ago under a bioenergy carbon capture and storage (BECCS) scheme that will one day capture the emissions and store them under the North Sea.

The practice is regarded as carbon neutral by the United States, European Union and the Intergovernmental Panel on Climate Change (IPCC) because the trees that feed it are deemed sustainable.

Yet burning wood can emit more CO2 than coal, according to Ember. The European Academies Science Advisory Council states that burning wood biomass for energy "is not effective in mitigating climate change." 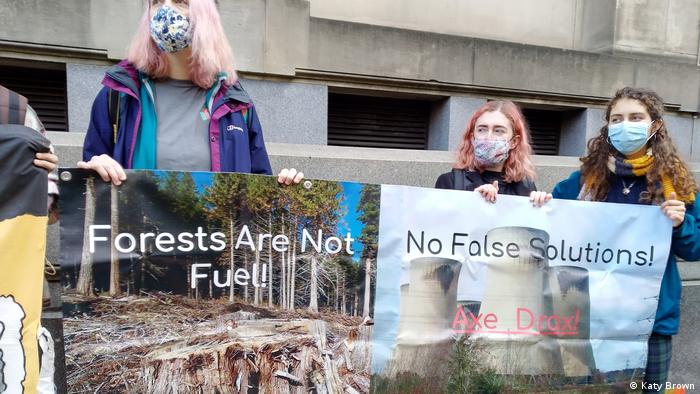 Big technology firms with fossil fuel ties were also front and center at the COP. Microsoft had the distinction of being a "principal partner" of the event, although it sells software to locate and extract oil and gas, noted Rachel Rose Jackson, director of climate research and policy at watchdog Corporate Accountability.

Microsoft has touted its commitment to be carbon negative by 2030, and to remove all carbon it has emitted since 1975 by 2050. But environmental group Greenpeace has reported that the company's contract with oil and gas conglomerate ExxonMobil to locate hard-to-find oil fields could alone "lead to emissions greater than 20% of Microsoft's annual carbon footprint."

Speaking just before the climate summit, Macklin from Race to Zero was upbeat about the corporate presence, saying that it would be the first COP to have non-state actors "at the front and center of the agenda." It was an opportunity to promote the current and ongoing "progress" made by "CEOs, cities, regions, investors," she added.

Jackson, however, said governments should not have been sharing the spotlight at COP26 with corporations who have pushed for technological solutions, offsets and "dangerous distractions."

States should instead have remained focused on legislating strict emission cuts "at the source." But the final agreement didn't specify a fossil fuel phase out, and also contained "watered down language" on fossil fuel subsidies, Jackson added.

Lobbyists are pushing the climate to dangerous extremes by blocking or diluting policies that would reduce the burning of fossil fuels.

Deforestation in the Amazon region has risen for the fourth straight year, despite international pressure and pledges from Brazil's government to preserve the rainforest. The EU aims to take a stand with an import ban.

Climate activist: Watering down of COP26 agreement is 'utter betrayal'