Despite positive developments in Germany, Chancellor Angela Merkel has cautioned that the pandemic has only just begun. She also said Germany should be prepared to open its pocketbook to help the EU. 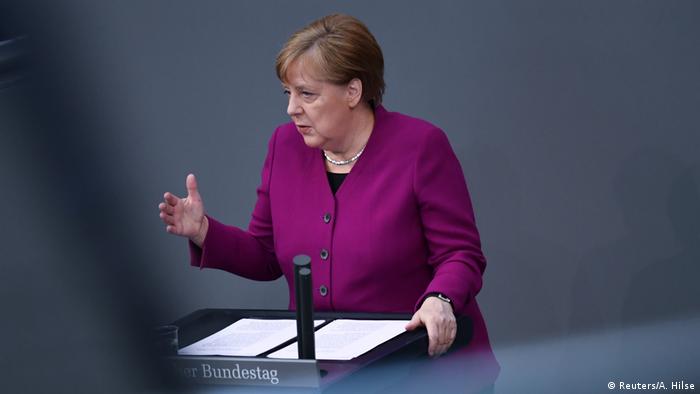 The decision to impose restrictions on public life in the face of the coronavirus outbreak was one of the hardest choices of her chancellorship, German Chancellor Angela Merkel told German lawmakers on Thursday.

"This pandemic is an imposition to democracy," Merkel said.

Last week Germany extended until May 3 most of the restrictions it had imposed to slow the spread of COVID-19, though some shops have reopened and older school children will be allowed to return to class.

The measures have thus far contributed to Germany being able to avoid overwhelming its health care system with coronavirus patients.

Still at the beginning of the pandemic

But the chancellor cautioned not to be too hasty in a return to normal life.

"We're not living in the final phase of the pandemic, but still at the beginning," she said. "We will be living with this virus for a long time."

Merkel called for lawmakers and the people of Germany to have patience and discipline now in order to avoid a potential catastrophe were the economy to reopen too soon. Disciple now would result in a quicker return to normal economic activity, she said.

Germany to open its wallet to EU

Speaking about the need for European unity, the chancellor said that Germany must be prepared to contribute "significantly" to the EU budget in order to shore up the bloc against the fallout from the coronavirus outbreak, German Chancellor Angela Merkel said on Thursday.

Speaking before lawmakers at the Bundestag in Berlin, Merkel said that, in the spirit of solidarity and as Europe's largest economy, Germany should be prepared to pay more into the EU budget.

"Europe isn't Europe when it doesn't think of itself as Europe," she said.

Merkel's speech contained some good and some bad news for Germany's European partners, according to DW Europe editor Georg Matthes.

"Merkel mentioned additional contributions to the EU budget, but it is completely unclear whether this would be grants or whether this would be loans," he said. "Also the amount of money on the table is completely unclear. It leads us back to an age-old row over mutualized debt, which will be very difficult to find a conclusion at this video conference."

The chancellor also spoke out against the idea of EU members taking on collective debt in response to coronavirus, so-called "coronabonds," an instrument members of the bloc have debated for weeks.

Countries like France and Spain, that have been severely impacted by the virus, are in support of the strategy, while Germany and the Netherlands are against.

"The point now is, to help quickly and to have instruments in hand quickly, which can alleviate the effects of the crisis," Merkel said.

She also called on the European Commission, the governing body of the EU, to conduct a study on how the pandemic has affected the bloc and to identify appropriate response measures.

In her speech, Merkel also praised the work of the World Health Organization (WHO), saying, "For the German government, I emphasize the WHO is an indispensable partner and we support them in their mandate." The comment alludes to a recent decision by US President Donald Trump to halt funding to the organization at the forefront of the effort to contain the coronavirus.

With more than 2.5 million people now infected worldwide in the COVID-19 pandemic, Germany has authorized the first clinical trial of a coronavirus vaccine. The first human tests will begin before the end of April. (22.04.2020)

Will the coronavirus crisis drive digitization in Germany?

The pandemic has boosted networking in Germany. Despite some technical hurdles, working from home is on the rise here to an extent thought impossible a couple of months ago. Will Germany become a digital high-flyer? (22.04.2020)

Coronavirus latest: Not in end phase of pandemic, Merkel says

Chancellor Merkel said Germany was still in the early stage of coping with the coronavirus pandemic. EU leaders will haggle over a package to help the bloc's economies recover from the outbreak. Follow DW for the latest. (23.04.2020)