Coronavirus: WHO estimates 10% of global population infected with COVID-19

Roughly one in 10 people across the globe may have already been infected with the novel coronavirus. The estimate from the World Health Organization comes as it predicts that "a difficult period" lies ahead. 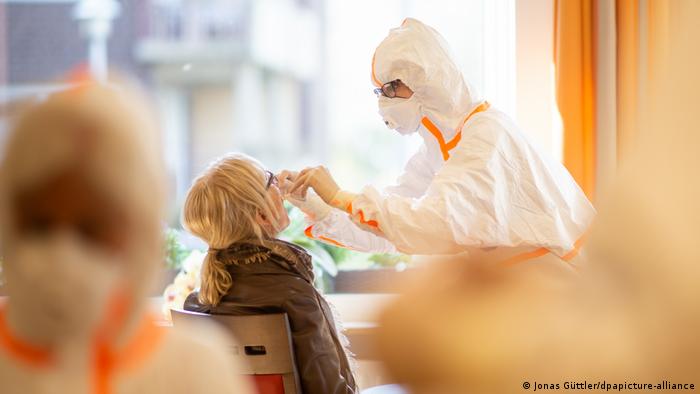 The World Health Organization said Monday that its "best estimates" suggest one in 10 people worldwide may have been infected by the coronavirus.

The figure represents more than 20 times the number of confirmed cases, which currently stands at more than 35 million.

"Our current best estimates tell us about 10% of the global population may have been infected by this virus," said Mike Ryan, the head of emergency operations at the WHO.

Ryan made the comments as he addressed the WHO's 34-member executive board focusing on COVID-19.

He told the board that outbreaks were surging in parts of southeast Asia and that infections were on the rise in parts of Europe and the eastern Mediterranean region.

Officials in Europe fear a repeat of the harrowing scenes witnessed in hospitals across the continent in the spring, when the virus swamped intensive care units in countries like Italy and Spain.

Already in some parts of Spain, hospitals are struggling with an influx of virus patients once more.

Meanwhile, Russia on Monday recorded a rise in cases close to the maximum level seen in May. However, the government has stopped short of reimposing strict lockdown measures.

India is currently registering the highest number of daily cases globally, with 75,829 confirmed infections in the past 24 hours, a day after crossing 100,000 total fatalities.

Coronavirus digest: Czech Republic back under state of emergency

The Czech Republic is back under the state of emergency after facing abysmal infection rates. Meanwhile, New Zealand lifted the Auckland lockdown. The World Bank head warns of a debt crisis. Read the latest here.

The World Health Organization plans to make 120 million rapid-diagnostic coronavirus tests available for people in lower- and middle-income countries. The tests are fast, simple and cheap — but are they reliable?