Coronavirus: US unemployment surges by 6.6 million in one week

Over 6.6 million people in the US applied for unemployment benefits last week, according to the latest government figures. Massive layoffs due to the COVID-19 pandemic have caused the US unemployment rate to skyrocket. 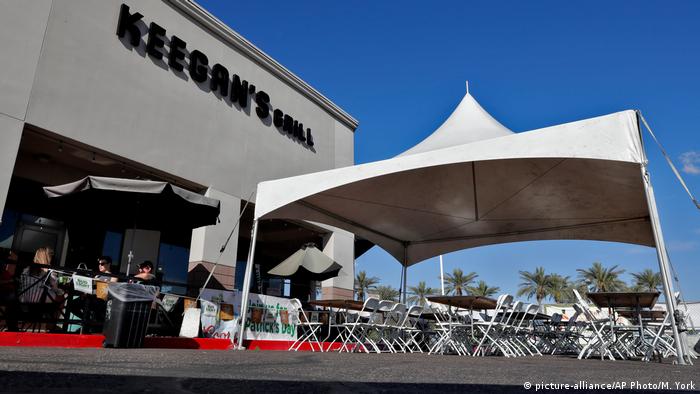 The unemployment rate in the US surged to a new record high on Thursday, with the US Labor Department reporting that 6.6 million people filed unemployment claims just last week alone.

Efforts to curb the COVID-19 pandemic by implementing strict social distancing measures and shuttering businesses and restaurants have led to mass layoffs across the country — prompting the unprecedented spike in US unemployment.

The figures from the past few weeks overshadow the previous weekly record of 695,000 which was set in 1982.

During the Great Depression from 1929 to 1933, the US unemployment rate peaked at 24.9% — a figure that economists and officials fear could now be topped due to the coronavirus pandemic.

On Monday, the Federal Reserve estimated that the unemployment rate in the US could rise to 32.1%, surpassing the previous record, NBC News reported.

Impact spreading to other industries

The economic impact of the pandemic has hit not only the tourism industry, officials noted. In addition to hotels, the manufacturing and retail sectors have also seen major job losses.

Some economists estimated that by the end of April, as many as 20 million people in the US will have lost their jobs.

Many businesses have slashed their payrolls in an effort to ride out the pandemic. Businesses that haven't been deemed essential like gyms, movie theaters and restaurants have seen their revenue dry up.

US aid seeks to soften blow

The package includes a $600 a week payment in jobless aid on top of the benefits residents would normally receive from the state they live in.

The package also expanded the number of people who are eligible for unemployment benefits, including contractors, the self-employed and workers such as Uber and Lyft drivers.

People are normally required to actively look for a new job while receiving jobless aid, but Congress passed additional legislation dropping that requirement, as many businesses remain closed and jobs are hard to find.