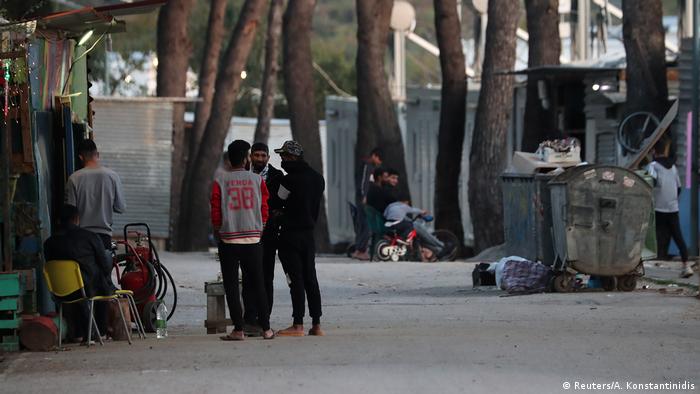 Greece's Migration and Asylum Ministry placed the Ritsona camp near Athens under quarantine for two weeks on Thursday after 21 of its residents tested positive for the coronavirus. The first case was a mother who gave birth last week.

Her infection, identified in an Athens hospital, 75 kilometers (47 miles) away, is the first recorded case at the overcrowded camps across Greece.

Now in place, the aim was to evacuate "the most vulnerable people, sick people, out of the camps to safe areas like hotel rooms that are available right now," said Johannson.

Medical staff and equipment were being made available for Greek authorities and bodies such as the International Organization for Migration (IOM) and the UNHCR refugee agencies, she told DW.

"We all are responsible to show practical solidarity towards Greece and the migrants," added Johannson, who separately during a European Parliament video link had described the Ritsona outbreak as a "warning signal."

Access to Ritsona had been restricted, according to Greek authorities, who added that extra medical staff and food would be sent to people in the camp. As yet staff in the camps has not been infected.

Greece currently has some 100,000 asylum-seekers, including 40,000 at island camps. The country is seen as a "gateway to Europe" for people fleeing conflicts and poverty in the Middle East and beyond.

Aid agencies are clamoring for more concerted action. "It is urgently needed to evacuate migrants out of the Greek islands to EU countries," said Caritas Europe's advocacy officer Leila Bodeux.

Greece, with its population of 11 million people, on Thursday recorded 1,415 cases of infection and 50 deaths from the lung-disabling condition known as COVID-19.

The government in Athens has ruled out moving migrants en masse to the Greek mainland.

Johansson, asked by DW about the fate of hundreds of unaccompanied minors inside camps, said that eight EU member states were "ready to welcome" the children.

"I do hope that the first relocation will take place in the coming week so that they are now being transferred to transit centers where they are also being tested for the coronavirus, and prepared for the relocation to these member states," she said.

Johannson said Brussels was liaising with Greece and UN organizations to relieve pressure "by relocating people out of these camps and also to return people."

Greece 'basically on its own'

"The conditions are far from ideal," Mitsotakis told CNN. "But I should also point out that Greece is dealing with this problem basically on its own…We haven't had as much support from the European Union as we wanted."