Coronavirus patients shamed and harassed in Nepal | Asia| An in-depth look at news from across the continent | DW | 22.09.2020

Coronavirus victims in Nepal say they have been a target of harassment in public and on social media. Rights organizations say the government has not done enough to create public awareness about the disease. 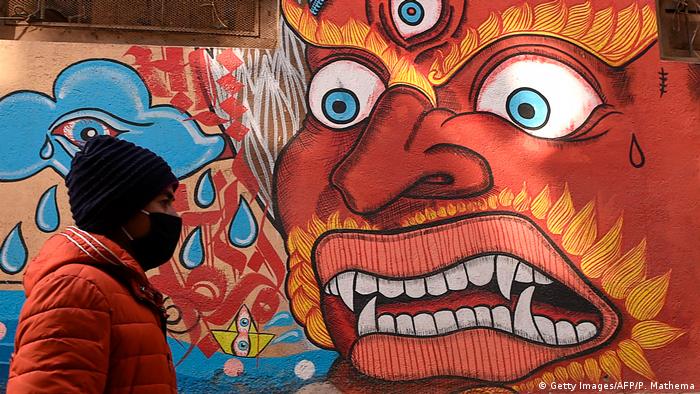 Rewati Panta is the chairperson of the ruling Nepal Communist Party (NCP) in the southern Sarlahi district. He has been involved in campaigns to raise awareness about coronavirus in his constituency.

Panta was tested positive for COVID-19 last month after working for months in the frontline with health workers to contain the coronavirus spread in the Himalayan nation.

Despite all the work he had done to make people aware about the virus, he was mistreated by his apartment owner, neighbors, and even some relatives after he fell sick.

"After contracting the virus, I moved to a friend's unused apartment to stay in isolation. The same day, three people in the building left their apartments after they learnt that I had contracted COVID-19," Panta told DW.

The main reason behind Panta's decision to move into his friend's apartment was to protect his ailing old mother.

The mistreatment of Panta is not an isolated incident in Nepal; many people suffering from coronavirus say they are being harassed and shamed by society.

According to the country's National Human Rights Commission, the harassment cases of COVID-19 victims have been reported in many districts and municipalities.

Earlier this month, Bimala Khaling Rai and her 22-months-old son were forced to leave their rented-room in Kathmandu after they tested positive for coronavirus.

On March 22, Prasiddhi Shrestha, a 19 year-old girl, contracted the virus just five days after returning from France. She became a target of social media trolls after some people called her a "super spreader" of the virus.

"I stayed in quarantine after my arrival in Kathmandu. I didn't even hug my mother," Shrestha told DW. "But media had already labeled me as a 'virus spreader.' I even faced death threats from social media users," she said.

"Trolling and public harassment only weaken the confidence of people in their fight against the virus," Shrestha added, arguing that it only forces people to hide their illness.

As of Tuesday, Nepal has recorded over 65,000 coronavirus cases and 427 related deaths, a considerably low tally in comparison to other South Asian nations.

The harassment is not limited only to the coronavirus patients; health workers, too, are facing abuse threats.

In August, some people in a Kathmandu neighborhood demanded that health workers staying in a house be evicted. These health workers were working in a government-run hospital and had been using the house for self-isolation.

There have been reports that workers who transport COVID-19 patients or those who have died of the virus faced mistreatment from public. Buddha Krishna Bagh, who has been driving hearse for 18 years, told a local news portal that people's attitude toward him changed after they learnt that he was carrying dead bodies of the COVID-19 victims.

Lochan Karki, president of the Nepal Medical Association, told DW that his organization has received reports of more than two dozen cases of mistreatment and threats against health workers from different parts of the country. He said that such incidents continue to happen because of a lack of legal action against the perpetrators.

Human rights activists say Nepal's government hasn't done much to spread awareness about coronavirus since the start of the pandemic.

"In other countries, health workers are being praised for their work against COVID-19. Unfortunately, our doctors and health staff are being harassed," Charan Prasai, a coordinator at the Accountability Watch Committee rights group, told DW.

Authorities say they have been encouraging people to maintain physical distancing and wear masks in public.

Chakra Bahadur Budha, a spokesperson for the Ministry of Home Affairs, told DW that the government would take action against people who mistreat coronavirus victims and health workers. He, however, said the government can only "take action on registered complaints."

Daman Nath Dhungana, a former speaker of parliament, told DW that the government needs to show extraordinary wisdom and urged authorities to work hard during these extraordinary times. "The pandemic is testing our system. There is a difference between issuing orders and implementing them," he said.