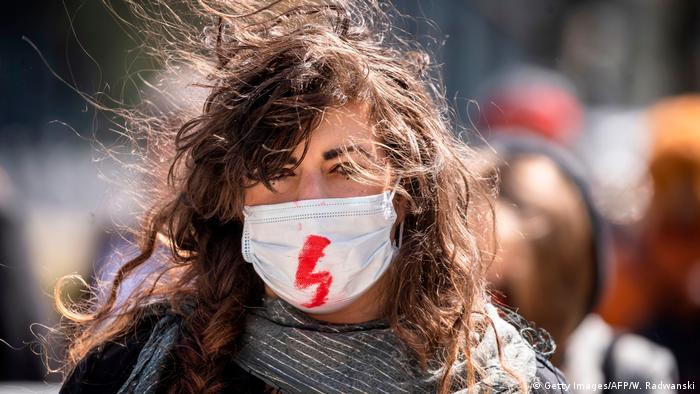 Women on Web is a resource for people who live in countries that ban abortions or permit them only under specific circumstances. Based in Canada and founded in 2006, Women on Web offers online counseling to people who wish to terminate pregnancies, and can arrange for pills to be mailed to people who would otherwise not have access.

According to the organization, with many clinics either shut or operating at reduced capacity, the coronavirus pandemic has made it more difficult for people to have access to safe abortions.

"Right now, medical personnel and hospitals in many countries are preoccupied with treating Covid-19 patients," help desk coordinator Hazal Atay said. "It's a disgrace, now that women are so desperate for support, that some countries are deploying authoritarian measures to make abortions harder, or censoring websites," she added.

Google Analytics reports that 2 million people visit womenonweb.org monthly. The website is available in 22 languages. Most visitors are from Brazil, followed by Mexico, Thailand, Indonesia, Poland and the United States. According to Women on Web, some countries — including Saudi Arabia and Turkey — have blocked users from accessing the website.

Spain, too, has blocked access to the website. A representative of the Interior Ministry told DW that the step had been taken because purchasing prescription drugs online is illegal in Spain.

"The Spanish Agency of Medicines and Medical Devices cannot take responsibility for medicines of unknown origin, which are not licensed in Spain, and are not administered under medical supervision," according to a statement from the ministry.

Abortion pills offered by womenonweb.org contain mifepristone and misoprostol. According to a 2018 guideline from the World Health Organization, this makes the pills safe for self-medication. "When using the combination mifepristone and misoprostol regimen, the medical abortion process can be self-managed for pregnancies up to 12 weeks of gestation, including the ability to take the medications at home, without direct supervision of a health care provider," the WHO reports.

Read more: 'Roe' says she was paid to turn against abortion movement

Mara Clarke founded Britain's Abortion Support Network, which helps people based in countries that ban abortions in most cases, such as Malta and Poland, travel to places that permit them.

"Coronavirus restrictions have made women who want to terminate pregnancies panic even more," Clarke told the German weekly Der Spiegel. Since borders were closed, she said, her organization has received twice as many calls from Malta.Many of the people who have sought assistance say they fear that abortion pills will no longer reach them by mail.

Numerous German users have visited womenonweb.org, as well — "maybe because there is so little information about abortions, maybe it's the fear of being stigmatized, the absence of health insurance or a residency permit," Atay said.

Regine Wlassitschau, the press speaker of the Pro Familia family-planning association, said Women on Web appeared to be especially popular with people "who do not want to be known to the German health care system." At womenonweb.org, users can seek advice from health care workers in the neighboring Netherlands, for example.

According to the Family Affairs, Senior Citizens, Women and Youth Ministry, Germany's government has no official cooperation with womenonweb.org. "So-called home use, where prescription drugs are collected at pharmacies and then administered under telemedicine supervision, is not legal in Germany," a spokesperson told DW. Abortion, however, is legal in certain circumstances.

The team behind the womenonweb.org platform takes a pragmatic approach to the fact that some governments block access to the website. The group has teamed up with a nongovernmental organization called Women on Waves.

The organization, which was created in 1999 by the Dutch doctor Rebecca Gomperts, has made headlines for carrying out abortions on chartered ships in international waters. The group's website now also features several links to blocked platforms.