The World Health Organization estimates that the lives of nearly 80 million children under the age of 1 are at risk. Vaccination programs for measles, polio and cholera have been suspended amid the coronavirus pandemic. 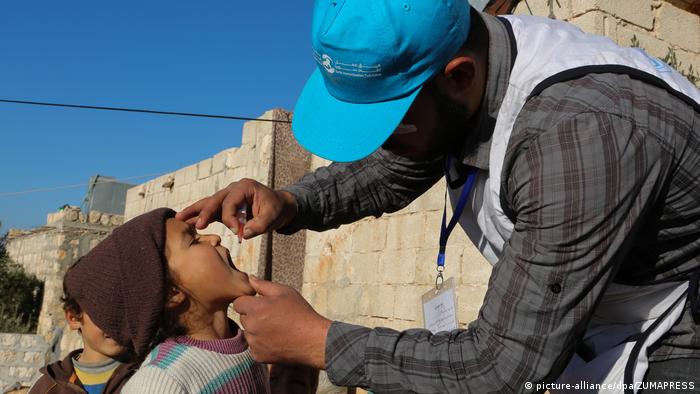 The global coronavirus pandemic is causing severe disruption to the process of immunization against diseases such as measles, polio and cholera, the World Health Organization (WHO) said Friday. Some 80 million lives of children under the age of 1 are at risk, according to a report from the WHO and partners.

The report, which was compiled by UNICEF, the Sabin Vaccine Institute and GAVI, showed that more than half of the 129 countries where vaccination data was available, reported moderate, severe or total suspensions of services during the months of March and April.

Follow the latest coronavirus developments in our rolling updates

"Disruption to immunization programs from the COVID-19 pandemic threatens to unwind decades of progress against vaccine-preventable diseases like measles," WHO director-general Tedros Adhanom Ghebreyesus said in a statement.

"We must not forget the dozens of lifesaving vaccines that already exist and must continue to reach children everywhere," Tedros wrote on Twitter.

UNICEF stated there had been major delays in vaccine deliveries due to the global lockdown and the significant reduction in flights that came with it.

More than 40 of Africa's 54 nations have closed their borders, though some allow cargo and emergency transport. Officials added that 46 campaigns to immunize children against polio had been put on hold in 38 countries, most of which were in Africa. Measles campaigns have been brought to a temporary halt in 27 countries.

Experts recommend routine immunizations of all children before the age of 2.

The WHO reluctantly recommended a temporary halt to polio immunization campaigns in April. Wiping out polio requires more than 90% of children to be immunized.

At least 12 countries in Africa have recorded polio outbreaks this year.

A functioning immune system is crucial in the fight against COVID-19. To maintain it, the body needs sufficient vitamins and other nutrients. But that is exactly what many people lack. (07.05.2020)