In a video message, President Hassan Rouhani welcomed children back to school under strict regulations and virtual alternatives. Concerns are growing that the decision could cause a spike in infections. 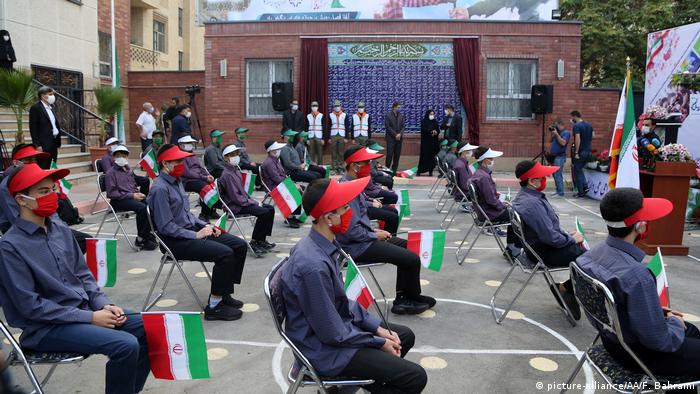 The new Iranian school year started again on Saturday after schools were closed seven months ago when the coronavirus first emerged.

Many of the country's 15 million students returned to school, but only in areas where authorities considered the number of infections to be low enough.

Schools in so-called "red zones" where infection rates have been particularly high did not open. In "yellow zones," such as in the capital, Tehran, where coronavirus infections are still a risk but not especially high, parents could decide whether to send their children to school or not.

Children who did not go to school had to take part in virtual lessons. Many parents in Tehran refused to send their children back over fears of new outbreaks.

In-person classes were restarted in 62% of the country's 116,000 schools and would be limited to 35 minutes. Virtual classes were run primarily through a state-run television channel and over the educational social network Shad.

"Our children's health is our highest priority, but their education is just as important," President Hassan Rouhani said on Saturday in a video conference broadcast on national television.

"This year will be a year of strict discipline for our students, something like in armed forces training camps," the president added.

Education Minister Mohsen Haji-Mirzaei explained to the Iranian news agency ISNA that in schools where the number of students is high enough pupils will be split into two groups, with one group attending school on even-numbered days, and the other on odd-numbered days.

Concerns among the medical community

Medical professionals have expressed concern about the move to bring children back into the classroom in one of the worst-hit countries in the Middle East.

Abbas Aghazadeh, president of the general assembly of the Medical Council of Iran, warned that the return to school "could turn into a human catastrophe within a very short period of time."

Dr. Mohammad Reza Zafarghandi, the government-appointed head of the Medical Council, wrote in a letter to the education minister that the "surprise decision to reopen schools would no doubt lead to an increased burden" on the country's health care workers.

"When an epidemic hits, schools are the first places that should be closed and the last to be reopened," ISNA quoted Zafarghandi as saying.

A spokesperson for the Health Ministry announced that the number of deaths associated with COVID-19 rose by 110 on Saturday, while the total number of confirmed cases reached 384,666.

Iran has released a report from the cockpit recordings and data of a Ukrainian passenger plane shot down by its military in January. An Iranian official urged that the black box data not be politicized.