Coronavirus: How long am I immune after an infection? | Science | In-depth reporting on science and technology | DW | 28.10.2020 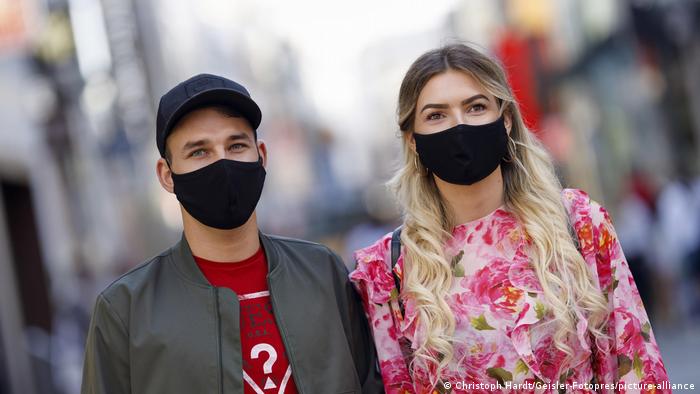 "They say I'm immune," said Donald Trump at an election campaign comeback after recovering from a COVID-19 infection. The US president told his audience that he would really like to kiss everyone. His case is perhaps the most widely-reported COVID-19 infection.

In the end, he refrained from kissing the audience and that's probably a good thing, because, based on the current science, it's not clear whether Trump is in fact immune.

The question of immunity has followed the pandemic right from the start. And in view of the rapid rise in infections in Europe, North and South America, that question has become more pressing than before.

A study out of the UK has again dampened any hopes of a natural immunity without a vaccine.

Researchers at Imperial College London (ICL) studied blood tests from more than 365,000 people in England and found evidence that the prevalence of antibodies dropped over time.

Here are the findings in a DW fact check:

How long am I immune after a COVID-19 infection?

That depends on a number of factors, including your age, as the ICL study suggests. People over the age of 75 showed significantly faster reduction in antibodies than younger people. In addition, the production of antibodies depended on the severity of the COVID-19 infection. Notably, the number of antibodies dropped less among health care workers. The scientists said that could indicate repeat or higher exposure to the coronavirus. So, whether an immunity lasts weeks or days depends on the person who gets infected.

In another study by Harvard Medical School and the University of Toronto researchers found that the highest prevalence of antibodies could be measured between two and four weeks after an infection, but that the number of antibodies dropped after that.

The level of antibodies was seen to remain high for about four months, suggesting that "people are very likely protected for that period of time," said Richelle Charles, the senior study author.

But even this study is no firm evidence of a protective immunity. The question of immunity against the novel coronavirus remains unanswered.

Why does research on immunity differ?

That has to do with the location of the studies, their timeframe and size.

All three locations were hotspots during the first wave of the pandemic, and all three showed different statistics.

In China, where the virus was initially detected, doctors working on a smaller study found that, on average, no antibodies were detected as soon as two months after an infection among people who had had no symptoms.

Scientists at the University of Arizona, meanwhile, seemed more confident with their findings. In a study of 6000 people, associate professor Deepta Bhattacharya said they had found that immunity was "stable for at least five months." Goodbye, face mask? No, even people who have recovered from an infection should continue to wear one

And, now, those researchers at Imperial College London say that the percentage of the population showing evidence of antibodies went down between June and September from 6% to 4.4% — which, again, indicates a shorter immunity.

In general, detecting antibodies is considered quite difficult. But the results of these studies — and what they tell us — are fundamentally different, not least because some of them are still only available as pre-prints, which means they have yet to be peer-reviewed and verified by other scientists. That includes the latest Imperial College London study.

But scientists agree that the question of immunity needs more research.

Do people who have recovered from a COVID-19 infection continue to use protective measures?

Yes, they do. Legally speaking, there is no distinction made between people who have recovered from a COVID-19 infection and those who haven't. The protective measures, which vary from country to country and, in Germany, from region to region, apply to everyone and are, in some cases, tied to heavy fines or penalties.

It is also advised from a medical perspective that people who have recovered from a COVID-19 infection should continue to adopt protective measures. First, because, as we've seen above, the duration of immunity is still unclear, and second, because the number of reinfections is also on the rise.

"If someone tests positive for antibodies, they still need to follow national guidelines including social distancing measures, getting a swab test if they have symptoms and wearing face coverings where required," said Professor Paul Elliott, director of the programme at Imperial College, in response to the ICL study.

Do some people, who have had a COVID-19 infection, show no immunity?

There is evidence of that, yes. In an American study of US Navy Service Members, 41% of those investigated showed no neutralizing antibodies in the blood.

In a Chinese study by researchers at Fudan University in Shanghai, it was 6%.

That suggests that it's not even clear whether every person who survives a COVID-19 infection develops a protective immunity.

Germany's Robert Koch Institute concludes, in a regularly updated briefing on COVID-19, that it remains uncertain whether, how and for how long people develop immunity against the novel coronavirus.