Italy has recapitalized its airline Alitalia, and France is considering similar moves to rescue affected companies. Now even Germany seems ready to use the ultimate weapon in the coronavirus battle: nationalization. 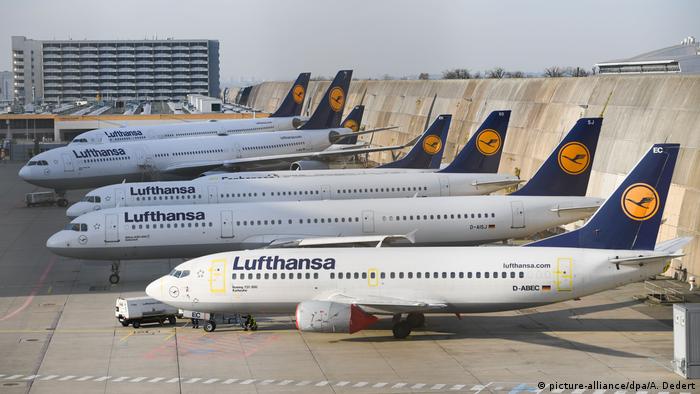 Italy has stepped up efforts recently to keep its bankrupt flagship carrier Alitalia afloat, with a new €600-million ($647 million) loan under discussion as part of a plan to renationalize the airline.

Meanwhile, the government in Paris has announced that the state would intervene in any way necessary to protect the country's economic assets, with Finance Minister Bruno Le Maire saying that this could include capitalizing corporations or taking stakes in struggling companies. "I can even use the term nationalization if necessary," he told the French public this week.

But unlike France, where the state holds multiple stakes in industries from carmakers to energy utilities, German economic policy has long considered government stockholdings in private firms a violation of free-market orthodoxy.

As governments around the world are pulling out all the stops to get the coronavirus crisis under control, opinions in Germany about nationalization are changing.

Achim Wambach, the head of the ZEW Leibniz Centre for European Economic Research, says he doesn't believe in state ownership of free-market enterprises, but adds: under normal conditions.

"The time hasn't arrived yet in which governments, as the watchdogs over market rules, should become active players in markets. Now, they should be focusing on managing the crisis," he told DW.

Wambach admits though, that in the coronavirus crisis governments must jump to the rescue of businesses by all means. Regarding German companies facing bankruptcy, he suggests a relaunch of "Wirtschaftsfonds Deutschland" — a refinancing vehicle that helped many companies survive the economic depression following the 2008/2009 financial crisis.

Loans to the rescue

Between 2009 and 2010, German state-owned development lender KfW provided €100 billion in government-backed loans, allowing tens of thousands of firms to stay afloat, and rescuing millions of jobs.

"The financial instrument has helped companies improve their liquidity through external capital such as loans and not through state stockholdings," he argues.

The head of ZEW, based in the German city of Mannheim, is also the chairman of Germany's Antitrust Commission, which is an independent panel of economic experts advising the government on competition issues. Commission members like him have always viewed the French model of government holdings with a wary eye. During the current crisis, however, even preachers of free-market orthodoxy like Wambach are giving their perceptions a reality check, and are growing skeptical about whether a €100-billion fund will be enough to stem the rising tide of bankruptcies.

"At the moment, we cannot put a robust figure to the capital required. But numbers aside, the fund should always be open for expansion when necessary," he says.

A bailout fund for German business is also supported by the country's leading economists, who, in an open letter published last week, called on the government to drop its insistence on a balanced budget, and demanded lower taxes.

Nothing is ruled out

Surprisingly, the prominent economists — including names like Gabriel Felbermayr from the Kiel Institute for the World Economy and former government advisers Peter Bofinger and Beatrice Weder di Mauro, just to name a few — also raised the issue of nationalizations, at least on a partial scale.

"If we are unable to contain the economic shockwaves [from the outbreak] and corporate insolvency emerges on a massive scale, measures such as recapitalizations by the state could become measures of ultima ratio," they said in their letter.

It wouldn't be the first time in recent German history that the government bails out a corporation with a big capital injection in exchange for a stake in it. During the financial crisis more than a decade ago, Berlin acquired a 15% stake in Germany's second-largest lender, Commerzbank, to protect it from collapsing.

The money at the time was provided by the SoFFin rescue fund — a government-backed "bad bank" as it were, which still holds the shares as it has not been able to monetize since.

So it seems only natural that German economists are still reluctant to push for a policy measure that may cost taxpayers dearly long after the virus crisis is over.