The pandemic has increased the danger posed to people displaced by catastrophic weather, a new report has shown. For the first time in two months, Australia has reported no virus deaths. All the latest from DW here. 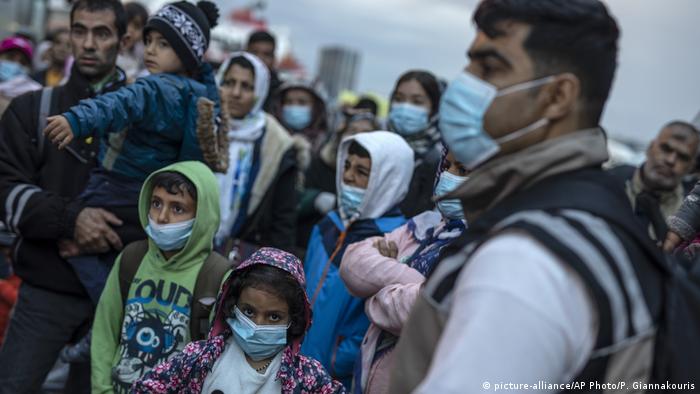 The coronavirus pandemic has increased the dangers posed to migrants and refugees displaced by natural disasters, according to an analysis shared in the 2020 edition of Germany's Global Risk Index, published Tuesday.

Climate change and natural disasters are increasingly forcing people from their homes and into precarious living conditions, the report says. Border closures and poor hygiene conditions in overcrowded refugee camps caused by the pandemic pose a particular threat to migrant workers and refugees.

"Consequently, there is an increased risk that such an event will turn into a humanitarian catastrophe," the report's authors wrote.

German Health Minister Jens Spahn and Research Minister Anja Karliczek said they expected a COVID-19 vaccine to be ready by mid-2021. But they warned of "risky shortcuts, with Karliczek insisting that "safety has absolute authority." The ministers said Germany's €750 million ($850 million) research fund would be mainly invested in three companies — BioNTech, CureVac and IDT Biologika.

Unemployment in the UK rose to 4.1% in July, the latest data from the UK's Office for National Statistics (ONS) shows. It's a sign of continued fallout from the coronavirus pandemic despite many sectors emerging from lockdown in early July. The number of people claiming jobless benefits was 2.7 million as of August, up nearly 121% since late March, when the UK went into lockdown over the virus.

Ireland's entire Cabinet is self-isolating after Health Minister Stephen Donnelly reported feeling unwell. Irish Broadcaster RTE reported that Donnelly had contacted his doctor for a coronavirus test. The health minister had taken part in a cabinet meeting and a press conference announcing the government's latest plans to reopen the country's economy.

Australia has recorded its first day without a coronavirus death in two months. Officials on Tuesday said that 50 cases of COVID-19 had been confirmed in the past 24 hours, a slight increase from a day earlier, but that for the first time since July 13 no one had died from the virus.

China has ordered a lockdown on the border with Myanmar after three imported coronavirus infections were detected there. Authorities ordered testing for each of the over 210,000 inhabitants of the city of Ruili and also asked people to stay at home. Vice Mayor Yang Bianqiang announced that all who could not prove the date of their arrival in Ruili or proof of permanent residency or a job there would be expelled from the city. Beijing reported eight new coronavirus infections in China on Tuesday.

Coronavirus suppression: 'It's a marathon, not a sprint,' WHO warns