The COVID-19 pandemic has shut down economies the world over, transformed workplaces, and is now known to have infected more than 100 million people. Follow DW for the latest. 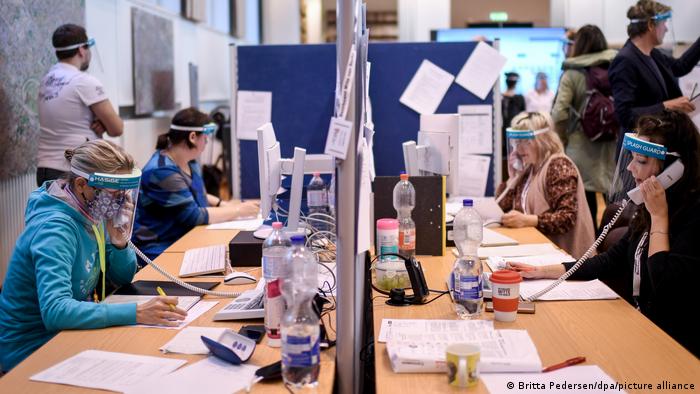 Staff working the phones in protective clothing at a health service contact-tracing building in Mitte, Germany

Various trackers of coronavirus cases worldwide, including that of Johns Hopkins University, ticked past 100 million by Wednesday morning.

More than one quarter of the cases have been identified in the US.

The world has been registering in excess of half a million new cases per day regularly since the second wave began picking up speed around November of last year.

The true tally will be higher and will likely never be known for a number of reasons: asymptomatic cases where the sufferer never even noticed they were ill, overwhelmed national test and trace systems losing track of infection chains, or even potentially intentional under-reporting of caseloads in some places.

Here's a rundown of some of the other most notable pandemic-related stories around the world on Wednesday.

The International Monetary Fund has predicted a global GDP hit of $22 trillion (about €18 trillion) as a result of the pandemic. Full story here.

Israel's interior ministry has announced it is closing its land crossings with Jordan and Egypt. The decision follows a similar restriction on incoming air travel, which came into effect on Tuesday.

The land border closures will begin at 0400 GMT on Thursday and remain in place until at least Sunday, when the initial ban on air travel is also due to expire.

Morocco will begin its vaccination program on Thursday, the royal palace said, making it the first African country to begin administering the inoculations.

The North African country has received 2 million doses of the AstraZeneca version, manufactured by the Serum Institute of India, and 500,000 doses of the vaccine produced by China's Sinopharm.

The palace said vaccinations will be available to all citizens over the age of 17 but that health, security and teaching staff will receive the jabs first.

South Korea was tracking a new cluster on Wednesday, logging 559 new cases nationwide in the course of Tuesday, up from 354 the previous day.

The bulk of the cases, almost 300 of them, had been traced to six Christian churches and mission schools, according to senior health official Yoon Tae-ho.

The Christian mission responsible for the facilities, International Mission, apologized "for not responding earlier and for thinking the students could have had a cold when a student first developed fever." It was ordered to test everybody linked to 32 of its 40 schools and churches around the country.

Myanmar launched its vaccination program on Wednesday with 1.5 million doses donated by neighboring India. Although the south Asian country managed to fend off the worst of the outbreak during the early stages of the pandemic, a second wave has brought the country's death toll to over 3,000.

Nepal also kicked off its vaccination drive with 1 million doses of the AstraZeneca vaccine from the Indian Serum Institute. The country is hoping to vaccinate 72% of its 30 million-strong population in three months.

US COVID-19 response: Biden under pressure to deliver

Claims from Venezuelan President Nicolas Maduro about a "miracle" cure for the coronavirus have elicited considerable skepticism in the Americas and beyond. Maduro appeared late Sunday in a national address, calling the concoction "a powerful antiviral, very powerful, that neutralizes the coronavirus."

As health agencies rushed to react to the claims, the local National Academy of Medicine said initial studies suggested it was simply a solution based on the herb thyme.

Colombian Defense Minister Carlos Holmes Trujillo died of coronavirus complications on Tuesday aged 69. He was first hospitalized in Bogota on January 11. President Ivan Duque declared three days of national mourning in memory of the minister and other COVID-19 victims in the country.

Mexico's President Andres Manuel Lopez Obrador was still experiencing minor symptoms in his bout with COVID-19, but was nevertheless "doing well," according to his deputy health minister, Hugo Lopez-Gatell.

The health official also said, via Twitter, that "a procedure for the Sputnik V vaccine could be formalized shortly," based on results of "proven efficacy, safety and quality."

Norway will close its borders to all but essential incomers, Prime Minister Erna Solberg has announced.

"In practice, the border will be closed to anyone not living in Norway," Solberg said.

While exceptions will apply to a few groups, including medical staff, the majority of migrant workers will be prevented from coming into the Scandinavian country, she said.

The German army has sent a medical team to Portugal after Lisbon sought the EU's assistance in containing the pandemic, a German Defense Ministry spokesman said.

Spiegel magazine reported that the Bundeswehr unit was consulting with Portuguese authorities on the construction of a field hospital to treat COVID-19 patients and the delivery of medical equipment.

In an on-going dispute with the EU over a shortage of vaccines, the CEO of the British-Swedish drugs company AstraZeneca insisted late on Tuesday that it was not selling doses ordered by the EU to other countries at a profit.

The company has cited procurement issues as the reason behind its failure to meet orders. It said it was two months behind schedule with regards to shipments for the EU.

Meanwhile, the UK arm of Mumbai-based pharmaceutical company Wockhardt, which is producing the Oxford-AstraZeneca vaccine in north Wales, has had to partially evacuate its factory after receiving a "suspicious package."

A spokesman for British Prime Minister Boris Johnson said his office was being kept abreast of developments.

The French pharmaceutical company Sanofi has agreed to produce 125 million doses of the BioNTech-Pfizer vaccine by the summer.

The vaccine doses will be produced in Frankfurt, Germany, and will be solely for use within the EU.

Health authorities in Spain have admitted they are running out of vaccines and will have to delay giving shots to health workers and nursing home residents after hold ups in deliveries by pharmaceutical firms.

Catalonia's public health chief Josep Argimon said the region will have used up all its supplies by Friday, when its "refrigerators will be empty."

Madrid regional vice president Igancio Aguado has also announced that Spain's capital is putting a halt to new jabs in order to use what it has in stock. The move will ensure those awaiting a second dose don't go without it, he said.

UK citizens and permanent residents returning from 22 countries deemed as "high risk" from coronavirus variants must soon quarantine in hotels, though the government did not say when the measure would be introduced as the plans were still being "operationalized."

The announcement came as the government said a current nationwide lockdown would be extended until at least March 8.

Switzerland said it was willing to to spend more than $1 billion (€826 million) on testing for asymptomatic cases, in the belief such examples were likely responsible for most new infections.

The alpine nation also said it will require negative coronavirus tests from people entering the country from high-risk areas as of February 8, as well as announcing plans to double its COVID-19 stimulus package to 5 billion Swiss francs ($5.63 billion, €4.65 billion) — the fund which supports businesses laid low by the country's restrictions.

A nightly curfew is failing to slow the spread of the coronavirus in France and tougher restrictions are being considered, government spokesman Gabriel Attal said. It was unlikely no action would be taken, he said.

Restaurants, bars, museums and ski resorts are closed in France but schools remain open. Shops are open but with restrictions on the numbers allowed inside.

President Emmanuel Macron is likely to wait until Saturday before deciding on any more curbs and is concerned that more restrictions may spark acts of civil unrest seen elsewhere in Europe, according to a government official.

After several days of unrest in response to the introduction of a nighttime curfew, the situation in the Netherlands was comparatively calm overnight heading into Wednesday.

German Interior Minister Horst Seehofer told newspaper Bild that the country was considering a stop on almost all flights into the country, as it sought more aggressive responses to COVID-19 variants that could pose a greater risk. That story was DW's most read article on Tuesday.

Also in Germany, the Robert Koch Institute on Wednesday reported a further 13,303 cases and 982 deaths.

The Republic of Ireland has said it would enact mandatory travel quarantines for the first time, and extend its current, third national lockdown until March 5. The move comes at least partly in response to the virulent B117 variant first identified in southeastern England.