The number of new coronavirus infections in the Netherlands has jumped by almost 10,000 in the past 24 hours. Meanwhile, neighboring Germany will enter a harder lockdown within days. Follow DW for the latest. 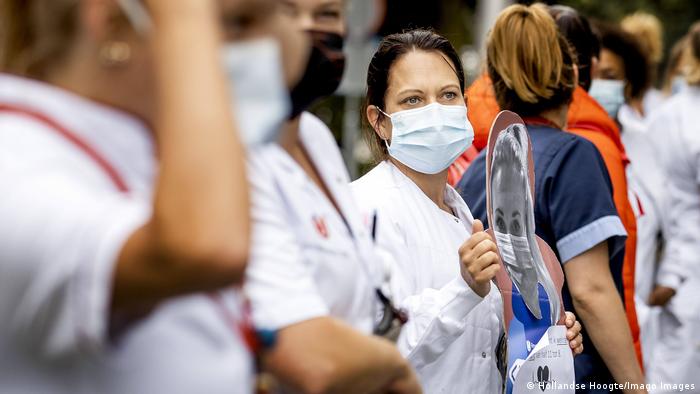 In the Netherlands, the number of new coronavirus cases rose on Sunday by almost 10,000 — the largest spike the country has registered since the end of October. The country, with a population of nearly 17.3 million, implemented a partial lockdown in mid-October, although the effects appears to have waned. Hubert Bruls, the chairman of the Security Council which manages the country's disaster and crisis response, voiced support for a stricter lockdown to mirror the one in Germany.

Bruls voiced concerns about Germans crossing the border into the Netherlands to do their Christmas shopping now that nonessential shops are due to close there. A similar strict lockdown in the Netherlands is "unavoidable," he told Dutch newspaper De Gelderlander.

Germany is tightening its lockdown restrictions amid burgeoning case numbers and fatalities, Chancellor Angela Merkel announced on Sunday following a meeting with the leaders of the country's 16 states.

The new restrictions will take effect on Wednesday and last at least until January 10. Under the new restrictions, stores, hairdressers, schools and day care centers are due to close. Click here for DW's breakdown of the new measures.

The number of coronavirus cases in Germany continues to rise, increasing by 20,200 to 1,320,716, data from the Robert Koch Institute (RKI) for infectious diseases showed on Sunday. The reported death toll rose by 321 to 21,787, the tally showed. Germany has been under a partial lockdown for six weeks, with bars and restaurants closed but shops and schools open. Some regions have already imposed tougher measures.

"The need for information for people in Germany is, of course, enormous in these times," said Armin Schuster, president of the Bonn-based Federal Office for Civil Protection and Disaster Assistance (BBK).

Schuster said it was important that the update happen before the holidays, when many people will be traveling to visit families. The warning app normally alerts residents to storms, large fires or the evacuation of areas due to the discovery of wartime bombs during construction work.

South Korean health officials reported a record high 950 new coronavirus cases in 24 hours on Saturday, most of them from the densely populated Seoul area. South Korea was seen as a success story early in the pandemic, and authorities there now warn they may once again impose more drastic restrictions on public life to keep the number of new infections from spiraling out of control.

A massive COVID vaccine rollout in the United Statesis set to get underway on Monday, with the first wave of 2.9 million shots heading for front-line health workers and elderly care homes, US Army General Gustave Perna said Saturday.

Pfizer is working with distribution partners to begin shipments of the BioNTech vaccine by truck and plane from its warehouses in Michigan and Wisconsin on Sunday to all 50 states.

New measures could include closures of retail shops, schools and day care centers. The news comes ahead of a meeting on Sunday at which federal and state leaders will decide on further measures.

The US Food and Drug Administration is confronting a crisis of trust just as it faces a major task: approving a COVID-19 vaccine under the Trump administration.