The shutdown was initiated over fears of the rapid spread of the omicron variant. Meanwhile, Germany's health minister has ruled out a lockdown before Christmas. Follow DW for the latest. 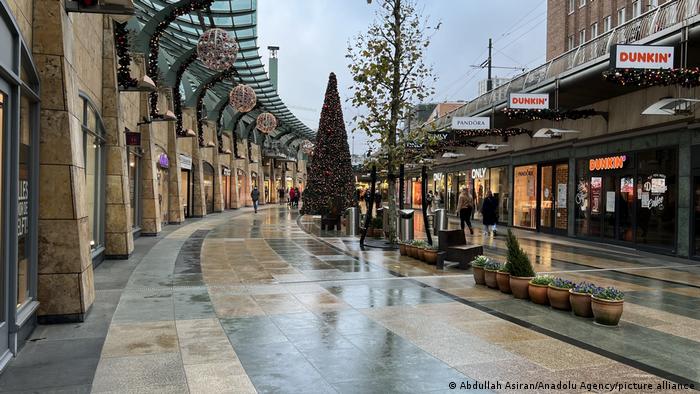 Shopping streets in the Netherlands were closed and people's Christmas plans were in disarray as the country began a lockdown on Sunday aimed at limiting an expected COVID-19 surge caused by the rise of the omicron variant.

Prime Minister Mark Rutte announced the sudden shutdown on Saturday evening, ordering the closure of all but the most essential stores, as well as restaurants, hairdressers, gyms, museums and other public places from Sunday until at least January 14.

The news came as a shock to many Dutch people as they headed into the Christmas and New Year period. Many people rushed out on Saturday to stock up on presents and food and to get a last-minute haircut.

Coronavirus infections in the Netherlands have dropped from record levels in recent weeks after a nighttime lockdown was put in place late last month. But cases involving the omicron variant have increased rapidly since the beginning of December and the strain is expected to become dominant before the end of the year.

Germany's Health Minister Karl Lauterbach said Sunday that the country will not go into lockdown before Christmas. He also reiterated his stance in support for a mandatory vaccination policy.

"No we won't have a lockdown like the Netherlands before Christmas," he told public broadcaster ARD. "But in fact it's like this: We will get a fifth wave."

"We have exceeded a critical number of omicron-infected people," Lauterbach added. "So this wave can no longer be stopped completely, and we have to counter it."

In a separate interview with the German Bild newspaper, Lauterbach also ruled out a lockdown after the holiday season.

A group of experts advising the government, meanwhile, said new measures are urgently needed in Germany to combat the surge in the Omicron variant.

The experts' report warned of an increasing risk that "critical infrastructure" including hospitals, health services and basic utilities could be disrupted if further steps were not taken.

​Despite the high number of infections, nearly 20% of Germans polled said they have plans to travel over Christmas.

In a survey by the opinion research institute YouGov on behalf of German news agency dpa, 13% said they wanted to travel to celebrate Christmas with friends or relatives. Six percent of those surveyed are planning a vacation trip. But 79% said they want to stay at home over the holidays, while 2% did not provide any information.

Thousands of protesters demonstrated in the Belgium capital of Brussels for a third time against government COVID-19 restrictions.

The government has urged the population to get vaccinated.

More than 50 people were arrested in a park near the EU institutions, a police spokesperson said, adding that water cannon and tear gas were used after some protesters clashed with police.

Italy's government is considering new measures to avoid a surge in infections during the holiday period, local newspapers reported on Sunday, amid worries over the spread of the highly contagious omicron variant.

After holding a meeting with ministers next week, Prime Minister Mario Draghi could impose an obligation on the vaccinated to show a negative test to access crowded places, including discos and stadiums, daily Corriere della Sera reported. Negative tests could also be required to enter cinemas and theatres, along with wearing masks outdoors.

London Mayor Sadiq Khan told BBC that new restrictions are inevitable, as without them Britain will see public services such as the National Health Service (NHS) on the verge of collapse.

Khan declared a "major incident" on Saturday to help the capital's hospitals cope with a surge in COVID-19 cases caused by the fast-spreading omicron coronavirus variant.

"I think it's inevitable," Khan told the BBC when asked about the likelihood of further restrictions. "If we don't bring in new restrictions sooner rather than later you're going to see even more positive cases and potentially public services like the NHS on the verge of collapse, if not collapsing."

Around 300 people in Spain have had to end their Christmas cruise a week early, disembarking in Gran Canaria on Sunday after several Covid-19 cases were detected on board, Germany-based operator Tui Cruises announced.

Four passengers had initially tested positive, but further cases were discovered after the entire crew and guests underwent testing. Those affected have been isolated on board with their close contacts, in coordination with the Spanish authorities. They are now due to continue their quarantine on land. None had serious symptoms, a company spokesperson said.

The Kremlin is convinced that the World Health Organization (WHO) will recognise Russia's flagship Sputnik V COVID-19 vaccine within a few months, the Interfax news agency cited Kremlin spokesperson Dmitry Peskov as saying.

The Kremlin on Tuesday said Russia had still not handed over all the information needed for the vaccine to be approved by the WHO because of differences in regulatory standards.

"I am deeply convinced that literally within a few months… the WHO will approve Sputnik and it will also then be possible to move forward on this path with the Europeans," Interfax quoted Peskov as saying.

Barring US travel for Israeli citizens and residents would mark a significant step for Prime Minister Naftali Bennett's government, given the hundreds of thousands of dual nationals and close ties between the countries.

Speaking before Sunday's cabinet meeting, Bennett reiterated that he would continue to restrict travel in order to avoid further lockdowns.

"We bought precious time for the State of Israel," by curbing travel immediately after the new variant was detected last month in South Africa, the premier said. "European countries are either in lockdown or are heading that way," he said, stressing that for Israel "time is running out."

Bennett on Sunday also said the country was in the midst of a fifth COVID-19 wave due to the Omicron variant.

"The time we bought is running out," Bennett said in a televised address.

"The numbers are still not high but it's a very contagious variant, doubling itself every two-three days, as we see around the world. It's possible to say that the fifth wave has begun."