Police reported at least 1,000 violations during an anti-lockdown protest in Stuttgart, attended by many COVID-deniers. Meanwhile, Israel has lifted its outdoor face mask requirement. Follow DW for the latest. 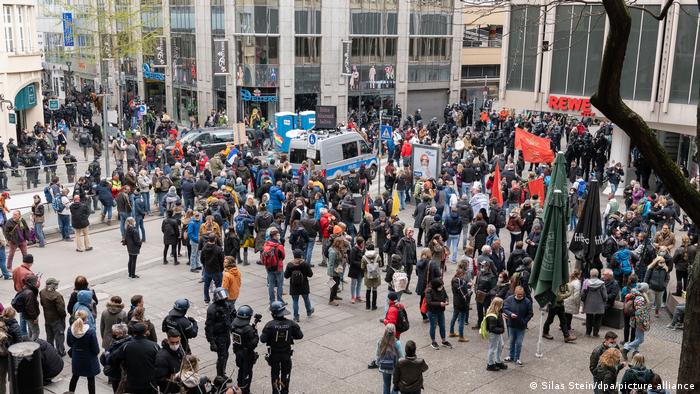 At least 700 people who participated in an illegal rally against COVID-19 restrictions in the southern German city of Stuttgart over the weekend have been identified, arrested and then released, police said late Saturday.

The city and regional German courts had banned demonstrations this weekend due to the higher risk of spreading the virus.

Stuttgart police said they recorded more than 1,000 violations of the face-mask requirement.

The protests were organized by the Querdenker ("lateral thinkers") group, which opposes lockdown measures.

Two police officers were injured due to demonstrators' resistance, the police statement said.

Meanwhile in Cologne, around 250 people gathered for a protest with the motto "no to curfews! Health protection instead of restricting our rights," public broadcaster Deutschlandfunk reported.

The city imposed a curfew for the first time since World War II to curb the spread of infections.

The broadcaster cited police as saying the participants complied with COVID measures and ended their protest before the curfew began.

Germanyis set to hold a national memorial service on Sunday for its 80,000 victims of the coronavirus pandemic. President Frank-Walter Steinmeier and Chancellor Angela Merkel will attend two special memorial events.

The Robert Koch Institute (RKI) for infectious diseases reported on Sunday a rise in coronavirus cases by 19,185. The reported death toll rose by 67 to 79,914.

Here's a roundup of some other major COVID-related stories around the world.

France is planning to impose a 10-day quarantine on arrivals from Argentina, Brazil, Chile and South Africa over concerns about variants of the coronavirus, the prime minister's office announced Saturday.

The country recently suspended flights from Brazil until at least next Friday, fearing the spread of the P1 coronavirus variant that was first detected in the South American country.

Japan is seeking an additional BioNTech-Pfizer vaccine supply. The prime minister, Yoshihide Suga, said on Sunday that he had preliminary talks with the drugmaker, who "agreed on the essentials."

The Japanese government had signed agreements to acquire the BioNTech-Pfizer vaccine, AstraZeneca and Moderna. So far, BioNTech-Pfizer is the only one the country's health authorities have approved.

Canada has recorded the second case of rare but serious blood clotting linked to AstraZeneca's coronavirus vaccine. Health authorities said the patient, who received treatment, was vaccinated with the AstraZeneca jab supplied by the Serum Institute of India.

On Tuesday, Canada reported a case of blood clotting in a Quebec woman who received the same shot.

Canadian health authorities said on Twitter that they would "continue to monitor the use of all #COVID19 vaccines closely and examine and assess any new safety concerns."

Australian Prime Minister Scott Morrison said on Sunday that he was in no hurry to reopen international borders and risk the country's nearly COVID-free lifestyle.

Since March 2020, Australia closed its borders to all non-citizens and non-residents and only permitted limited international travel.

South Africa's health regulator recommended that the government lift the pause on using Johnson & Johnson's coronavirus vaccine under some conditions.

"These conditions include, but are not limited to, strengthened screening and monitoring of participants who are at high risk of a blood clotting disorder," the South African Health Products Regulatory Authority (SAHPRA) said.

The country has recently lifted some measures as it returns to relative normality thanks to a mass-vaccination campaign.

Nearly 54% of its 9.3 million population have received both shots of the BioNTech-Pfizer coronavirus vaccine.

The Health Ministry said masks were still required for indoor public spaces and urged citizens to keep masks to hand.