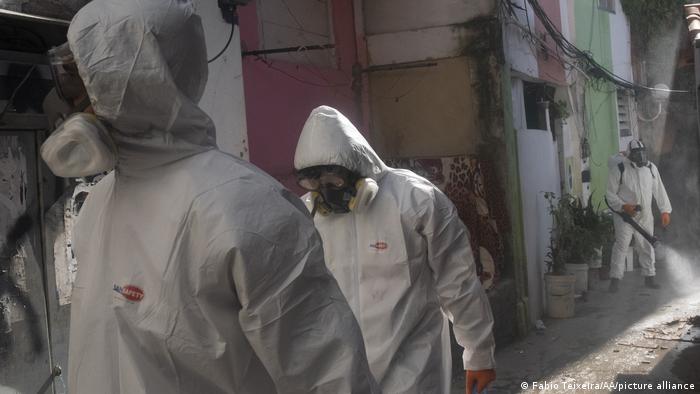 Authorities have been disinfecting favelas to curb the pandemic in Brazil

Brazilian health authorities on Wednesday announced they have detected a new coronavirus variant found in the southeastern state of Sao Paulo, as the country struggles to respond to a surge in cases.

"It is a variant simiilar to that of South Africa, although there is no history of travel or contact with travelers from South Africa," Dimas Covas, the president of the public Buntatan biomedical institute said during a press conference.

Brazil is already struggling with another homegrown variant of the virus, called P.1, which the authorities detected in January.

"There is the possibility that it is the evolution of our P.1 towards the mutation in South Africa," Covas said on Wednesday.

How is Brazil handling the pandemic?

The discovery of the new Sao Paulo variant comes as Brazil closes out its worst month of the pandemic so far. Brazil recorded 57,606 coronavirus-related deaths from March 1 to March 30, the most fatalities in one month since July 2020.

"We're at the worst moment of the pandemic, and indications are that April will be very bad too," Espirito Santo Federal University epidemiologist Ethel Maciel told the AFP news agency. Brazil's low income favela communities and indigenous population have been hit particularly hard by the virus.

What is Bolsonaro's stance?

Brazilian President Jair Bolsonaro on Tuesday pledged to spend 5.3 billion reais ($918 million, €783 million) to prop up the country's ailing health system. The right-wing leader is often criticized over his government's poor vaccine rollout and for denying the severity of the pandemic.

Earlier this month, Bolsonaro told Brazilians to "stop whining" about the pandemic as he railed against social distancing measures during a public event. Former Brazilian President Luis Inacio Lula de Silva has slammed Bolsonaro's "imbecile" health policies, likely laying the groundwork for a faceoff in the upcoming 2022 presidential elections.

Brazilian local media have reported several instances of attacks on monkeys — including an incident where 10 monkeys were poisoned at a nature reserve in Sao Paulo state — as fears of spread of monkeypox grow.